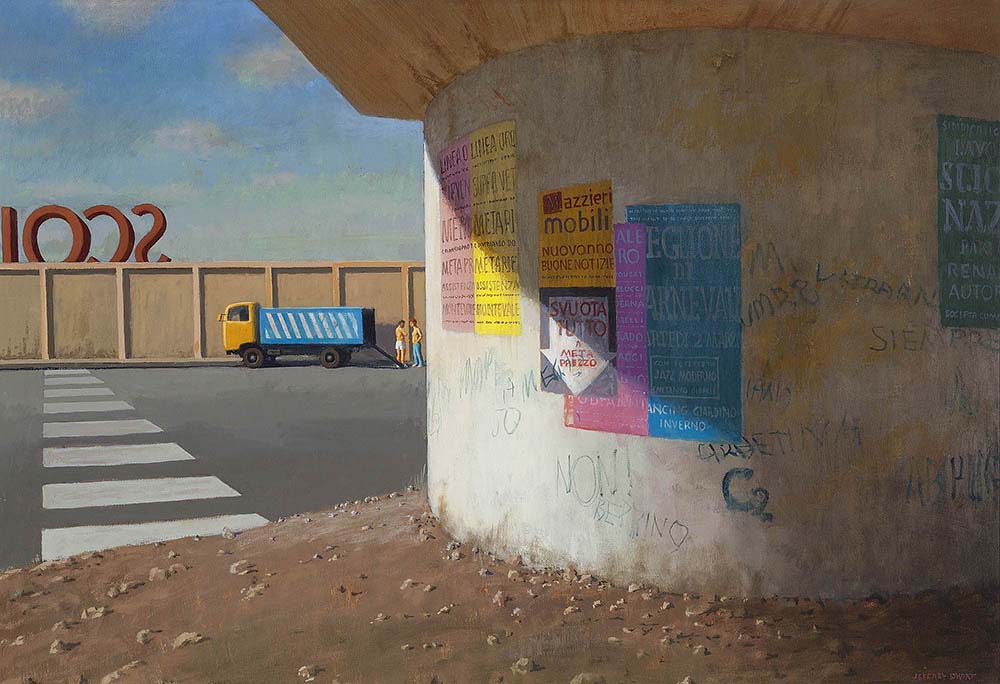 The aesthetic merits of Jeffrey Smart’s elegant Pylon I of 2006 deserve a full chapter. It stands as an artistic high point in his mature reflections on the perennial theme that occupied him for most of his life: the re-imaging of urban life as caught in a series of re-composed mental snapshots.

The present late-period painting clearly exemplifies the refined sensibility and carefully selected subject matter for which he was justifiably renowned. This sizeable and significant work, painted by the then eighty-five year old artist, is a first rank signature piece that epitomizes his unique artistic grasp of selectively composed vignettes of the visual puzzles and patterns of contemporary metropolitan environments.

This abundant handful of exhibitions was bolstered by the exhaustive research to be found in three important academic publications: Jeffrey Smart: Unpublished Paintings: 1940-2007 of 2008 by Christopher Allen; Jeffrey Smart of 2005 by Barry Pearce and Jeffrey Smart Retrospective of 1999 by Edmond Capon, Barry Pearce and Peter Quartermaine. The latter national touring retrospective exhibition and its associated publication gave, as excellent retrospectives do, the Australian public an opportunity to scrutinize and reassess artistic prominence. Needless to say, its resounding success reaffirmed Smart’s institutional imprimatur and cemented him permanently into Australia’s cultural history.

The accomplishments and quality of this remarkable activity (seven important exhibitions, three scholarly publications and one national touring retrospective in one decade) prompted reverberant effects that were almost immediately felt in auction rooms. Finance follows form and buyers have recently driven the prices of Smart’s paintings to unprecedented levels.

Certainly this strong market interest affected all of Smart’s works; however, what is quite remarkable is that his late-period paintings, created during the last decade of his life, generated uncommonly high demands. The results are revealing. For example, his Sunbathers at Construction Site of 2003 was bought at Deutscher + Hackett in November 2007 for $600,000 (including buyer’s premium).  Seven years later, his comparable The Red Warehouse of 2003 was keenly sought and sold for $878,400 (including buyer’s premium) at Sotheby’s Australia in August 2014. 1

Of course, in Smart there are no dashed-off works, look-at-me bravura or painterly happenstance. He was a studious artist whose pictorial compositions are as carefully constructed as they are rendered. Upon scrutiny, they demonstrate how closely he studied his subjects and how his carefully deliberated-upon compositions guided the visual unity of his paintings. They were often gridded out and the images were recreated on canvas with many subtle changes being made to the placement and scale of the forms and elements in the final painting. So often, they act as concentrated creations of optical geometry that guide the eye to see everyday reality differently – more intensely; more appreciatively; more responsively. These affective attributes are most clearly seen in his late-period paintings where maturity and facility are honed to hold an aesthetic “edge” that is less clearly refined in his earlier paintings.

Smart did not just simply paint his canvasses – he constructed them. Firstly, there is the carefully composed underlying structure of proportions, shapes, and visual arrangements with their repetitions, harmonies and balances. Secondly, there is the overlaid superstructure with its recognizable elements from observable reality together with the optical effects that give them visual credibility.

In short, his paintings, such as the accomplished late-period Pylon I of 2006, more clearly have what may be described as an architectonic order. They possess the “neat” solidity of well-designed buildings and the compacted power of well-constructed sentences. These characteristic attributes are all the more clearly appreciated in the archival photographs that Smart used for Pylon I of 2006 – it is clear that they acted as the raw material for a unique form of highly selective pictorial integration and that Smart’s art arose from a sophisticated process of imagistic accretion and aesthetic arbitration.

Smart’s uncommonly painstaking and compositionally incisive procedure infuses his paintings with a more closely focussed “visual stability” that is all the more evident in his late-period, post-2000 paintings. This important aesthetic feature elevates them well above mere design and differentiates them from the comparatively “formless” aspects of expressionistic paintings. As a consequence, the pictorial elements in Smart’s paintings always appear linked together in ways that marry form and content in a highly individualized way. No other Australian artist used anything like these methods or conceptual approaches.

In an important sense, Smart’s aesthetic approach is visitational. His paintings arise from his travel experiences; the viewer is drawn to them but somehow never feels part of them. Smart started thinking along these lines in late 1941 in Adelaide, the city of his birth. “My attraction to urban life, factories, trucks and vacant city lots came in my early 20s when I decided I’d painted my last billabong scene forever”. 2

Subsequently, his subjects changed and he developed an interest in the “new savagery”, as he called it, of industrial “landscapes”, urban developments and commuter freeways. Smart’s paintings are so acutely presented glimpses of views or snatches of overlooked aspects of everyday scenes that viewers now commonly speak of a “Smart” cityscape, just as readily as they speak of an “Arthur Streeton” vista or a “Fred Williams” forest of saplings. Each of them aestheticized ubiquitous reality to iconic effect.

Smart also employs what might be called a car window aesthetic. His briefly perceived glimpses give his paintings a temporary ambience as though a scene is captured in the blink of an eye, while being isolated from it. These qualities have led some commentators to discern a filmic quality in Smart’s paintings and to see parallels in some Italian films. For example, Michelangelo Antonioni’s films La Notte (The Night) of 1961 and Il deserto rosso (Red Desert) of 1964 present many urban landscapes of clashing juxtapositions, water towers and high-rise streetscapes to give voice to the caught-in-concrete bittersweet human complexities of urban life. Certainly, there are fertile parallels.

All of these aspects and attributes are evident in Pylon I of 2006. The painting radiates with an unusually focussed light and pulses with a compacted energy. Gone is the sullen sky of earlier works and the painting’s central glow reveals a concrete pylon that displays a highly confident and skilled technique that captures the dappled colouristic effects of posters, graffiti, calligraphic lines and patinated surfaces. The painting’s central area acts a foil to its background in ways that show pictorial refinement together with a breadth of painterly technique and optical variety. It is important to note that these impressive effects are less evident in two closely related paintings: Via Piero della Francesca of 2006/07 and The Graffiti Artist of 2007, where pictorial details seem, by comparison, less resolved and painterly effects and techniques of pigment scumbling are more sketch-like and unassured. Considered in this way, Smart’s Pylon I of 2006 reads as a culmination.

Looked at in these variously related ways, Smart’s Pylon I of 2006 is an assured masterwork that is infused and innervated with mature insights. In a way what Smart wanted to achieve was simple. “Anyone can learn to paint”, he said, “but few can make a picture; anyone can learn to write, but few can make literature. That’s the mystery”. It may be a mystery but its effects are clearly palpable in his Pylon I of 2006. “To me” he goes on, “a successful painting has what T. S. Eliot called ‘the stillness of a Chinese jar’. That is something I try to achieve in everything I paint … just think of the stillness of a Chinese jar”. 3 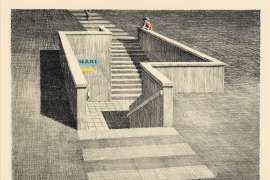 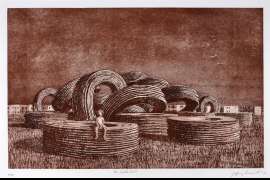 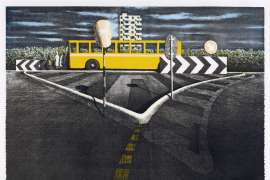 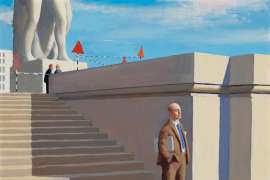 Lot 20
Jeffrey Smart
Study for Outside the Ministry 1970