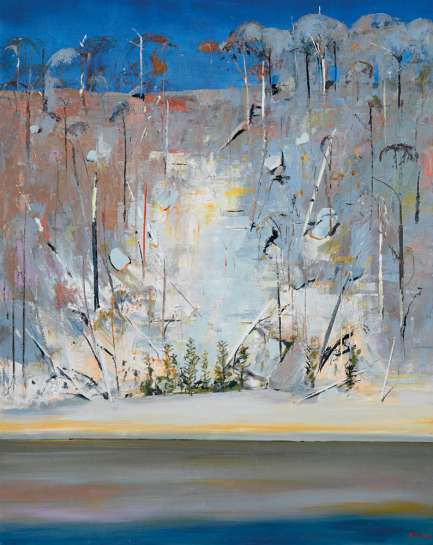 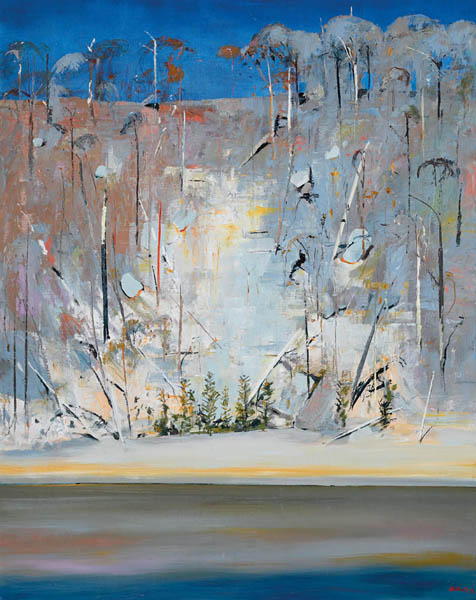 The Shoalhaven River was a continual source of inspiration to Arthur Boyd and, looking back over the artist’s vast body of work, formed a major part of Boyd’s oeuvre. The Shoalhaven region on the south coast of New South Wales, has historically been an area favoured by artists because of its unique geography and landscape. The area is known for its lush green dairy farms, white sandy beaches and the majestic Shoalhaven River which snakes its way past Bundanon, the Boyd family’s property.
Upon his return to Australia in 1971 after twenty-one years living in England, Arthur and his wife, Yvonne, were introduced to the Shoalhaven River by art dealer Frank McDonald who invited the couple to spend the weekend at his property. Here, Boyd describes the feeling of his first experience of the Shoalhaven:

‘I can remember the day vividly. It was so hot and searing the oil ran from the palette onto the sand. I never paint in the shade or wear a hat because it distorts the light on whatever I’m painting. I can remember the heat was terrifying.’1

The Boyds fell in love with the area on that January day in 1972, later purchasing two properties; Riversdale (in 1973) and Bundanon (in 1978), from which they had access to stretches of the meandering Shoalhaven and the magnificent sandstone outcrop, Pulpit Rock. From their living room they experienced the constantly changing light which turned the sky from the darkest blacks to the brightest blues, with mauves and indigos in between. ‘They experienced Australia’s seasons and catastrophes; in high summer the air so clear and hot that light carved out the shapes of rocks like a burning scalpel. When the floods came after endless days of rain, the river heaving its great brown mass towards the sea, carrying all before it.’2

The present work Shoalhaven Landscape deftly conveys the character of Shoalhaven country and here, the still beauty of the river and scrub beyond. Boyd’s palette is dominated by ultramarines, whites and browns which were used by the artist when rendering the river in full daylight. The artist skilfully captures the heat of the day with his depiction of a clear, cloudless blue sky, reflected in the vast surface of the river. In the centre of the composition is a tract of sandy-coloured clay which stretches down to the riverbank, drawing the viewer’s eye through the landscape. Slender brown trees populate the arid hillside, their diminished canopies providing the only shade for flora and fauna nearby. Here, Boyd has distilled the unique characteristics of this captivating setting; through his arrangement of compositional elements and a mastery of tone and colour, the artist demonstrates his deep understanding of, and admiration for, this special place.

Arthur Boyd’s affinity with Bundanon and the Shoalhaven saw him in the early 1980s offer the properties to the Australian Government and, after nearly ten years of bureaucratic delays, his long-held dream was fulfilled. He believed that his magical place should belong to the people of Australia. Boyd had hoped that the natural beauty of Bundanon and Riversdale would be preserved for the enjoyment of future generations. The public now has the privilege of visiting the Boyd’s home and studio and can experience the landscape which provided the inspiration behind such an iconic and compelling group
of works.