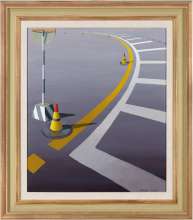 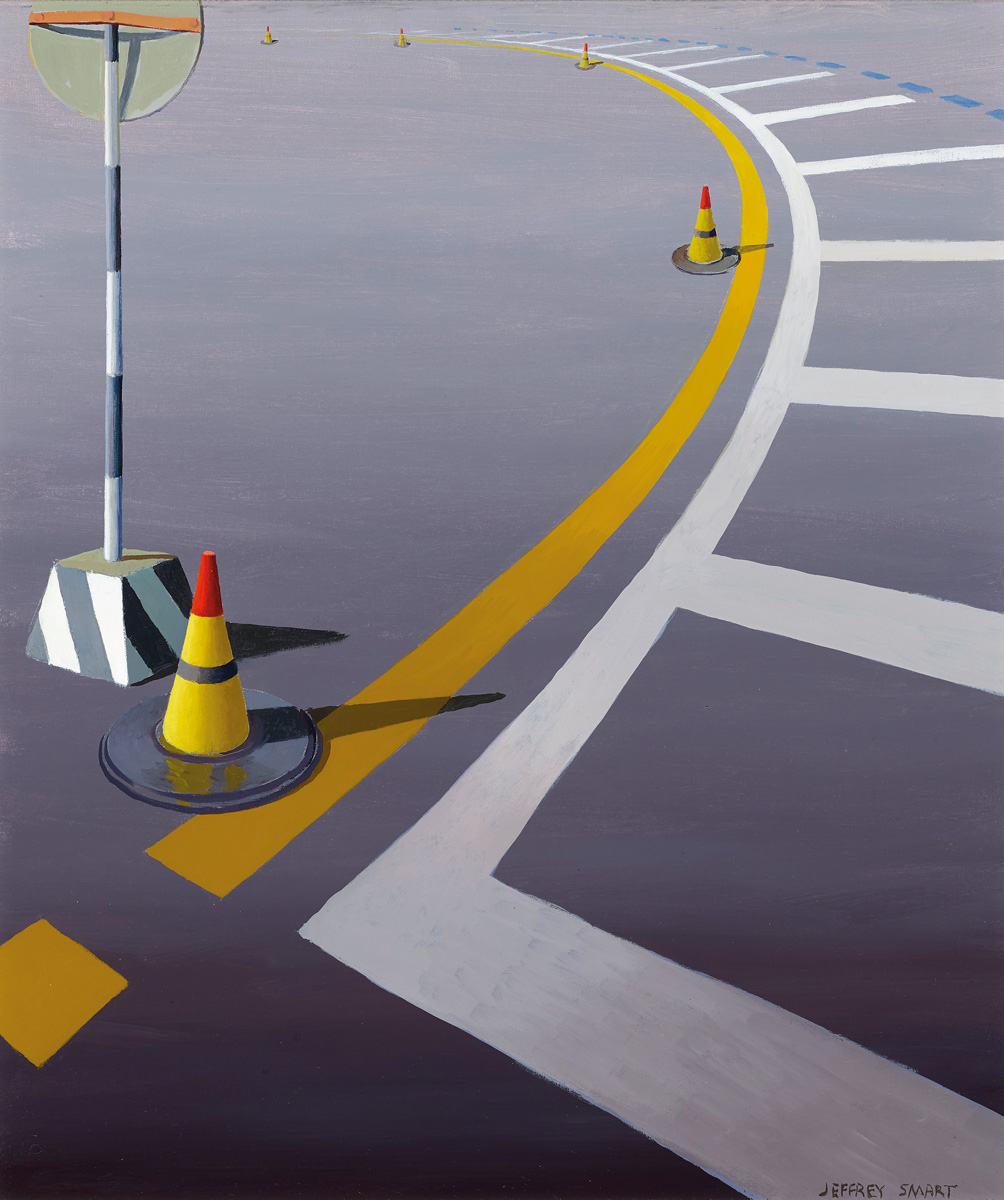 A painting by Jeffrey Smart might begin with a sudden epiphany, a flash of inspiration found by the side of the road. Smart would make a quick sketch, and maybe a snapshot, then store the motif on an imaginary shelf, awaiting its day in the studio. At this point, the hard work would begin. An instant of pure pleasure could be the prelude to months of toil, as the artist struggled to transform his initial observations into a painting.  Smart liked to quote Shelley’s lines:

Rarely, rarely, comest thou,
Spirit of Delight!
Wherefore hast thou left me now
Many a day and night?

This summed up the dilemmas he faced on a regular basis. First, there was the search for a motif, as the artist might endure long periods when nothing captured his imagination. When a theme had finally been discovered and recorded, he would begin making oil sketches, searching for a definitive composition. This could be a frustrating task, as the most promising material became increasingly intractable when moved around on paper or canvas.

The studio may be a place of torture, but an artist will keep returning, becoming anxious if kept away for too long. The pay-off is another brief visitation from that Spirit of Delight when everything comes together in magical fashion. It’s not simply a process of working through stages until the job is done, because a breakthrough may occur after a week or only a few minutes, often by accident. All the preliminary work is exploration or experimentation, as the artist searches for the elusive key that unlocks the door upon which they have been knocking.

Study I for Bus Terminus shows the lengths to which Smart would go in planning a major painting. This ‘study’ is roughly two-thirds the size of Bus Terminus 1973, in the collection of the Art Gallery of New South Wales. The biggest difference between the two works is a row of colourful buses across the top of the larger work. As if to emphasise that this is an addition, Smart has included a black-and-white line, a thin traffic bollard, that cuts across the top of the picture.

This horizontal line intersects with the vertical black-and-white line of the traffic sign on the left-hand side of the work. In the study we see only the back of this sign, but in the AGNSW version it is turned towards us, revealing itself as a yellow disc with a lavender-blue border and bisecting diagonal. The final change sees the shadow of the traffic sign extended as a dark, slender zip that slices through the centre of the composition.

Without taking measurements, one may see that both works have been mapped out with geometrical precision. As usual, Smart has used the classical device known as the Golden Ratio to organise the division of space in his paintings. No-one can explain why the Golden Ratio (approx. 1.618), creates compositions and architectural forms that are pleasing to the eye, but it proved as useful to Smart as it was to the ancient Greeks.

This underlying geometric framework is almost certainly the reason Smart could produce paintings of the most non-descript subjects and imbue them with a sustained visual interest. There’s nothing in Study I for Bus Terminus that would make us stop and take notice were we to encounter a similar scene in everyday life, but Smart saw things differently. Bus stops, highways, airport terminals – those spaces the French anthropologist, Marc Augé, describes as ‘non-places’ – were for him, a constant source of fascination.

We pay little attention to a curving yellow line painted on asphalt, aside from registering whether we should step over it. Yet when Smart asks us to admire a similar line in one of his paintings, we view it as a skilful geometric abstraction. In real life, nothing could be less interesting than a flat, tarred road, but in a picture, we admire that sleek grey space, and the way it adds brightness to the other colours.

Smart was no surrealist, but he knew the same thing that René Magritte (1898-1967) knew in The Treachery of Images 1929, when he wrote Ceci ne pas une pipe under a picture of a pipe. It’s not a bus terminus, it’s a painting of a bus terminus. We can admire the skill with which the artist captures this ordinary scene, approaching it with the same compositional strategies that a painter of the Renaissance might have used with an altarpiece.

The irony - which may be found in most of Smart’s paintings - is that we are more likely today to be found standing in front of a bus stop than an altar. The static world of the past, in which most people hardly ventured out of their own neighbourhood, has given way to an age of speed, mobility, and uncertainty. Smart takes the signs and spaces of our peripatetic era and invests them with an uncharacteristic, classical stillness. This painting may be a study of a bus terminus, but it’s also a monument to a modernity that has given up on a Heavenly Creator in favour of those new gods - Movement and Progress. 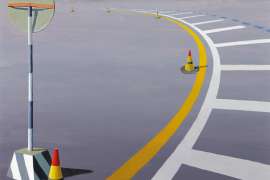 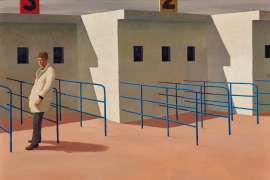 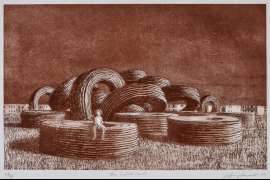 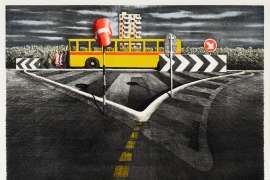