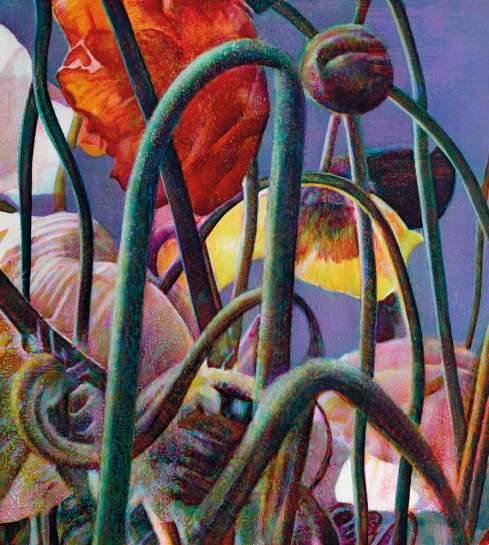 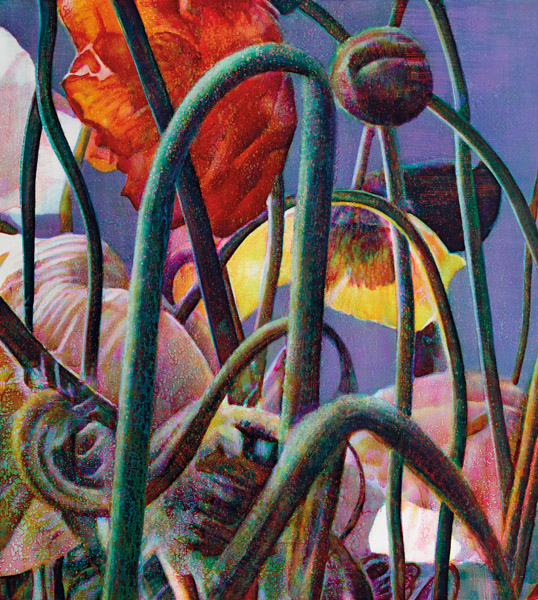 Tim Maguire is well known for his large-scale paintings that depict cropped, macro views of flowers and plant-life. This UK based Australian born artist is credited for taking the established genre of still-life painting in a contemporary direction – one that considers the realm of digital image reproduction and printing mechanics. In doing so he creates works with alluring aesthetic qualities generated through his unique approach to painting.

The present work was created through Maguire’s colour separation technique. This innovative methodology is well documented, and involves breaking down his photographically derived source imagery into three colour layers – cyan (blue), yellow and magenta. Using non-porous tightly woven canvas, each colour is applied in finely pigmented layers of paint that coalesce on the surface. Maguire then flicks solvent onto the works at various stages, which eats through the paint to reveal unpredictable secondary tones as a layer, or layers are removed. The resulting random marks, dots and drips permeate his painted surfaces and destabilise a straight interpretation of the still-life genre.

The idea of colour separation stems from digital printing techniques, where the colours are separated into layers indicated by the letters CMYK. Thus Maguire brings an awareness of digital and mechanical print processes to his oil painting practice. His works are largely the result of process, stating ‘my subject matter [is] really painting.’1 One can readily discern when viewing his work that the physical act of applying layers and throwing solvent are inseparable from the final outcome.

Maguire’s system of image making evokes concepts of both generation and corruption. The artist carefully builds the image through adding layers that could easily be brought to a level of visual perfection given the refined quality of his skilled paint application. However any illusionary effects are willfully disrupted as Maguire brings the viewers’ attention back to the surface qualities of the work, and the materiality of the entire project.

While the idea of self-conscious effacement falls into a post-modern paradigm, evidence of physical disintegration and corruption was a large part of still-life painting in the seventeenth century, which often included vanitas symbols. These took the form of decaying or rotting fruit and leaves among more obvious elements such as skulls. The inclusion of these features were intended to remind the viewer that despite the fruitful abundance of that depicted, all life will eventually pass and human pleasure is but a transient state of being. Maguire’s work has been connected to such concepts.2 In a way his marring of surfaces act in a similar manner – a reminder of artifice and that perfection is a passing illusion.

Maguire has painted poppies in multiple works and while he may eschew literal connotations, the flowers themselves are semantically loaded. As the blooms that grew on the resting place of fallen WWI soldiers in Flanders thus becoming a symbol of Remembrance and bear a symbolic weight. They are also the source plant from which opium and heroin are derived – thus it is hard to gaze at the exotic, twisting forms of the potent blooms in the present work and not ponder any greater significance. The glowing colours created and speckled surfaces of these larger-than-life flowers take on an almost hallucinatory quality.

Though Maguire’s subjects may largely come from the earth, these are not earthy depictions. His works contain a lightness and luminosity, and are paintings finely wrought for a thought-provoking means of aesthetic seduction. 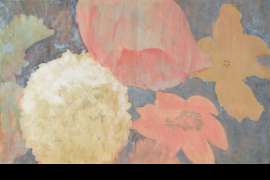 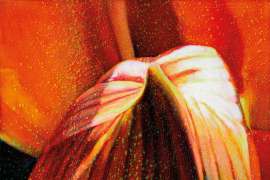 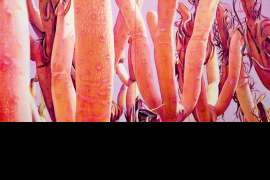 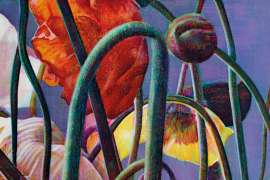