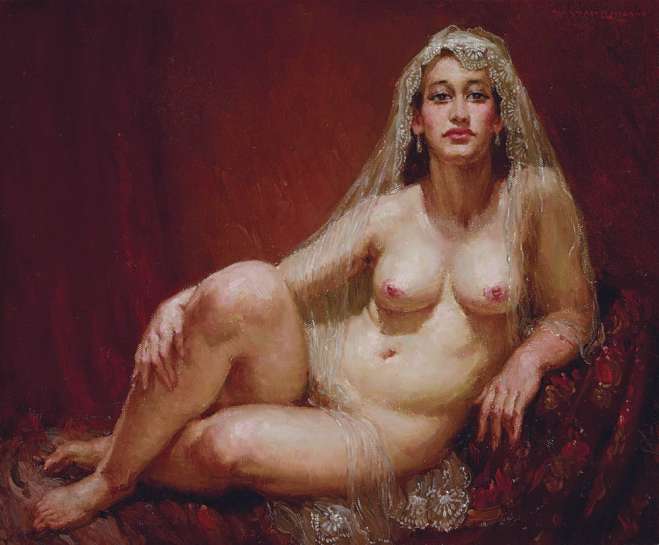 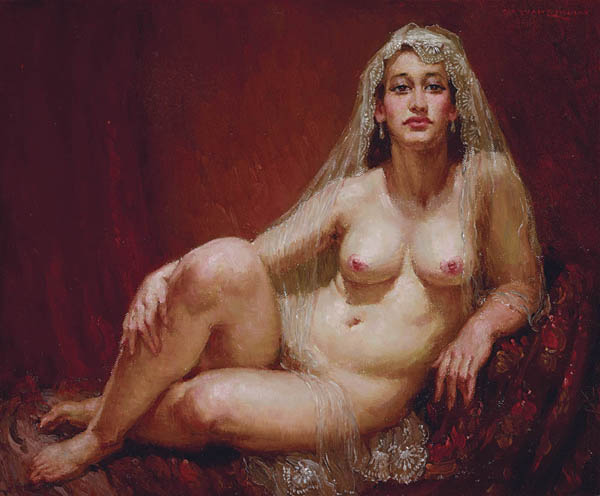 Norman Lindsay (1879-1969) was one of Australia’s most celebrated artists, with a career spanning over seventy years. He was a household name, widely recognised for the cartoons he made for The Bulletin for fifty years, as well for his beloved children’s book The Magic Pudding. Lindsay frequently provoked controversy in his art, with his nudes especially divisive – there were even police proceedings commenced against Art in Australia for publishing images accused of obscenity in the Norman Lindsay edition of December 1930 (the case was eventually abandoned). Though the nude is a common theme throughout the tradition of Western art, Lindsay’s treatment of the subject was scandalous because of his frank, palpably erotic, approach to representing bodies.

The Veil (Rita) exemplifies Lindsay’s provocative portrayal of women whose bodies are grounded by a sense of weight and radiate sexual energy. ‘I have utterly repudiated the academic nude image of femininity as an innocuous stuffed dummy designed to decorate the walls of second-class suburban homes’, he insisted.1 The model here is Rita Lee, who met Lindsay when she was eighteen, and posed for many of his works between 1936 and 1942, when she married. She was one of his favourite sitters, with her olive skin, dark eyes and long black hair lending her a fascinating exoticism. Lindsay described Rita as ‘a quiet reticent girl who seldom spoke, but who secreted within her all those emotional intensities from which any variation on the feminine image may be extracted. She had the loveliest breasts I ever painted from, and they drove me to despair’.2

The Veil (Rita) captures Lindsay’s captivation with her striking beauty. The diaphanous white lace of the veil skims along her body, the fabric so sheer it appears only as a vague shimmer against her glowing skin. Lindsay’s handling of flesh is exceptional, realistic and tactile, set against the luxurious patterned red chaise and the deep red background. Dressing Rita in only a veil and earrings emphasises her nudity, but also draws attention to her dark eyes. It is Rita’s gaze that makes her so confronting; by directly addressing the viewer, she disrupts the conventional power dynamic between subject and object.

Rita is certainly not just a body to be looked at, but asserts an active presence in this work. She exudes self-assurance, appearing comfortable in her pose and, importantly, unembarrassed by her lack of clothes. Lindsay’s daughter Jane remarked of Rita that ‘serenity was her outstanding attribute. She made a kitchen chair look like a throne.’3 There is certainly something regal in Rita’s appearance in The Veil, the almost haughty way her chin is slightly lifted. Douglas Stewart took this further, declaring that, when painting Rita, Lindsay captured ‘a strange, timeless calm…She is a woman half of this earth, and half of the shadows. We do not know her. She is beyond us.’4

The Veil (Rita) was painted in a pivotal time in Lindsay’s personal life. In the spring of 1940 he returned to live at Springwood, his property in the Blue Mountains, having been living away from his family in Sydney since 1934. It was only during this six year period that Lindsay began to seriously work in oil, so The Veil (Rita) is situated in a period of experimentation and flux.

Lindsay’s work is widely represented in both public and private collections, and the artist’s home, Springwood, has been conserved by the National Trust of Australia as The Norman Lindsay Gallery and is open to the public.

ALL CURRENT & PAST CATALOGUE WORKS BY NORMAN LINDSAY 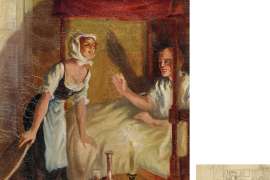 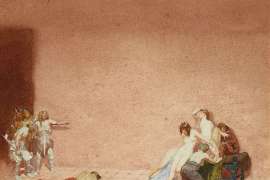 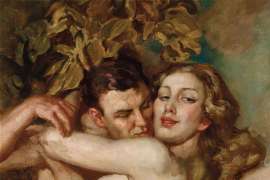 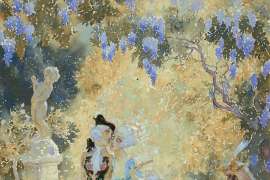