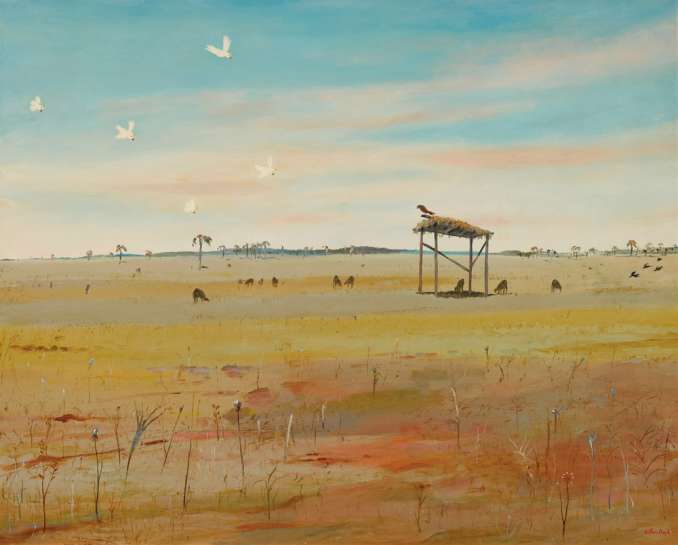 Arthur Boyd’s creative oeuvre encompasses a range of different themes and modes of expression. From symbolically charged allegorical paintings, to naturalistic landscapes that respond to Australia’s varied terrain – this diversity is integral to the rich artistic legacy left in Boyd’s wake. Within his multifarious creative output the Australian landscape was a subject that the artist frequently returned to, and his paintings of the Wimmera district are amongst his most well loved and sought after.

Boyd first visited the Wimmera region in western Victoria during the summer of 1948-49. The artist saw something in these dry, vast stretches of agricultural land that stimulated his creative vision. In it he found a landscape that combined the ‘matter-of-fact and poetical’,1 evoking something of the quintessential Australian rural experience. Flat sun-bleached fields, searing heat, farm animals, some remnant farming equipment, and distant blue hills – these elements combine to convey both the pastoral and the infinite in Boyd’s representations of the district. Such views are familiar to most Australians, thus his creative engagement with otherwise unremarkable vistas touched a chord of national pride.

When Boyd’s Wimmera landscapes were exhibited in 1950 in Sydney they received instant acclaim, and both the Art Gallery of New South Wales and National Gallery of Victoria acquired works for their collections.2 Over the next few years Boyd continued to travel through the Wimmera district, garnering inspiration for work which he would continue to create decades later.

Having spent much of the 1960s living abroad, in the 1970s Boyd returned to Australia and reconnected with the landscape in a profound and lasting manner. This renewed engagement was sparked in 1972 when Boyd visited art dealer Frank McDonald’s property Bundanon on the Shoalhaven River in country NSW. Arthur and Yvonne Boyd subsequently purchased the estate Riversdale also on the Shoalhaven, moving there in 1975.

Boyd commenced his Shoalhaven works, yet he continued to paint Wimmera landscapes during the 1970s and the present work reflects an artist re-immersed in and creatively invigorated by his homeland terrain. Such ‘straight landscapes,’3 were made purely in response to the physical and metaphysical qualities of the land itself. As such, they may have provided some relief from the psychological intensity of his mythically charged paintings.

The present work contains all the hallmarks of a classic Wimmera scene. Parched brown and golden fields are interrupted by sparse vegetation, the dark silhouettes of grazing livestock, and a simple wooden farming structure upon which a black crow sits to survey the view. Further towards the horizon distant trees fight a losing battle to provide shade from the sun, and blue hills rise to meet to a pale, hot sky. The joyful sight of white cockatoos that fly into the scene introduce an uplifting quality to this stark vision of rural Australia.

Ursula Hoff describes the pull of both the ‘idyllic and sombre sides of life’4 upon the artist’s psyche, a juxtaposition evident even in this ‘straight landscape’. The present work seems at once peaceful, yet perhaps reflects the artist’s then growing concern for environmental conservation, and his fear that his beloved landscape would suffer at the hands of man.5 While there is no obvious drama in the scene, the threat of drought and soil erosion loomed large for the district.

In this work, Boyd brings a slightly more abstracted vision to the Wimmera than his 1950s paintings of the same theme, a stylistic quality that he further developed in his dramatic depictions of the Shoalhaven River. In Boyd’s creative response to both regions, he developed a pictorial language to define these particular terrains, and in doing so cemented their place in the public imagination.