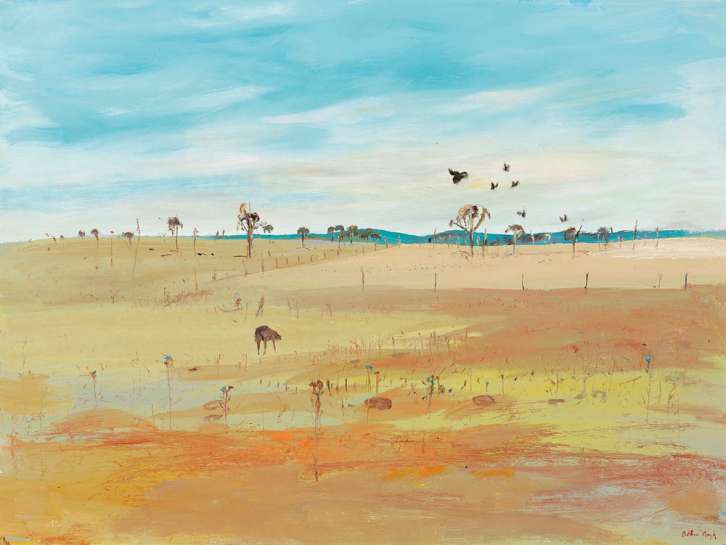 Arthur Boyd consistently alternated between naturalistic and imaginative phases in his work; he would often return to the landscape genre after an exhaustive period of creative output. There is a certain sense of serenity present in Boyd’s depictions of the landscape, particularly after viewing his chaotic, figurative works painted from the imagination, such as Nebuchadnezzar or his Biblical subjects. The palette Boyd chose for many of his landscape works is optimistic when compared to the dark tones of his Bride series. Boyd’s sentiments of the Wimmera landscape are reflected in his depictions of the countryside that he returned to paint on several occasions throughout his long and distinguished career.

The young artist was first introduced to the beauty of the diverse, regional Victorian landscape when he was invited in 1947 by his uncle, the novelist Martin Boyd, to design and paint murals for his dining room at ‘The Grange’ in Harkaway. At the time, he was completely devoted to his painting and spent much of his time outdoors, absorbing the natural environment and painting the landscape of the local area. In the summer of 1948-49, Boyd travelled with his friend Jack Stephenson, a poet, to Horsham where he painted the countryside near the border of the Wimmera River. The subdued beauty of this area inspired him to return many times over the next few years. ‘He discovered there the hint of something that had drawn other painters of his generation, a subject tentatively recorded by only a few artists of the nineteenth century and touched upon by even fewer: the empty spaces of the great interior.’1

The Wimmera is district of western Victoria known for its infinite, arid flats with only the Grampians and Mount Arapiles breaking the horizon. Boyd’s landscapes painted from these regions were widely acclaimed, the artist rendered the vast flats of the wheat-farming plains with a straw-hued palette reminiscent of the Heidelberg School tones. The present work, Wimmera Landscape is a rendering of the central western Victorian landscape; the flat foreground dissected by a fence and divided horizontally by the outline of the Grampians. The serenity of the landscape is only interrupted by a small flock of birds and a lone horse in the foreground

Wimmera Landscape fits comfortably into this oeuvre of Boyd’s painting; the scale, imagery and palette are characteristic of the best Wimmera paintings completed by Boyd during this most productive period of the artist’s career. Franz Philipp describes here the landscape which Boyd came to know so well, “dry, semi-arid, sheep and wheat country, turning yellow and sun-parched in summer, with patches of burnt-off stubble or weed...he invariably includes some sign of life, human or animal: a ramshackle shed, scattered thin, dusty sheep, a hunter followed by his slow, thirsty dog, some distant houses or even only a bird...”2

Arthur Boyd has become one of Australia’s most well-known and loved artists of the twentieth century. He produced an immense volume of work, continuously developing his style over six decades however maintaining his own characteristic sensibilities. Boyd’s Wimmera paintings are collected privately and also feature in the collections of major Australian and international art institutions.