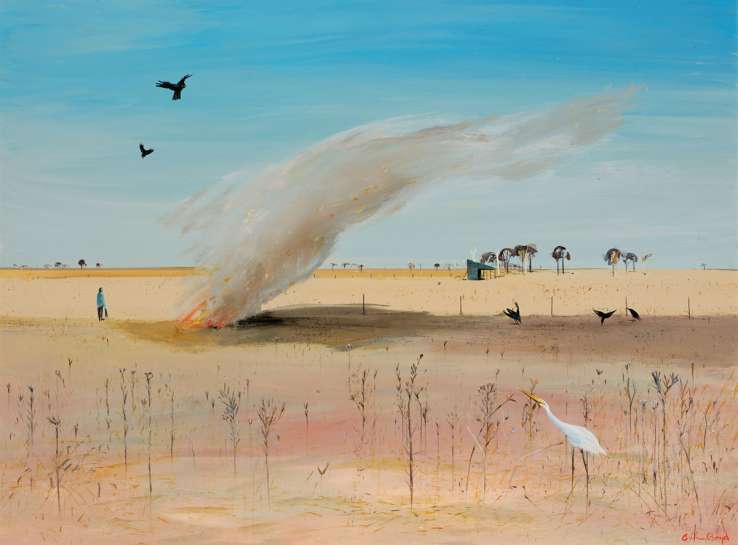 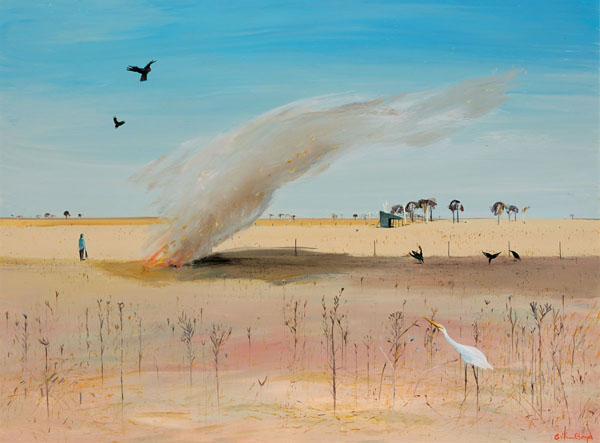 Arthur Boyd sits in the highest echelon of Australian landscape painters. For over five decades, Boyd investigated the complexity and variety of the Australian bush, capturing its peculiarities and topographical features and imbuing it with his own idiosyncratic motifs and personal symbols. Together, these explorations have produced what curator Barry Pearce aptly termed Boyd’s ‘landscape of the soul’1 – a unity of imagination and place that charts the artist’s life experiences and reveals the development of his varied painting methods and techniques.

The Wimmera, in Victoria’s northwest wheatbelt, was a subject that captivated Arthur Boyd. Boyd first visited there in the summer of 1948-49. He had a month-long stay in Horsham in the autumn of 1950 that included visits to the Grampians in the south-east. This first flush of Wimmera paintings received high praise when exhibited in 1950 and ’51. Critics celebrated how Boyd had utilised the medium of egg-tempera – first used in his religious and war-related paintings – to infuse these works with a highly translucent quality and how he had deftly rendered the bleached colours, endless horizons and small, intricate details such as the dry grass. The art writer for the Melbourne Age noted approvingly that the artist’s ‘parched landscapes echo the spirit of the countryside’.2

Such high praise would have been particularly well received by Boyd. This was not any landscape but one in which he had consciously set out to respond to the Australian pastoral tradition and the way the country had been moulded and shaped. In his famous Brueghel-inspired paintings from the mid-1940s, Boyd introduced a dark palette, dense thickets and claustrophobic spaces to approximate the heaviness of world events and the effects on the personal lives of those living through those times. In contrast, the Harkaway and Wimmera paintings from the late 1940s are more optimistic, light-filled pictures that celebrate Australia and an unidealised vision of settler culture.

Wimmera Landscape with Fire and White Heron c1985 draws and expands upon these earlier inspirations, observations and sources to create a uniquely felt response to the land. A lone farmer oversees an annual end-of-season burn-off, the smoke carried by a puff of wind. Two black cockatoos take flight, screeching hoarsely in mid-air, while three crows have just landed, presumably to scavenge for any leftover morsels of food. Oblivious to the momentary calamity, a white heron purposefully searches for insects in the surrounding grasses and thistles in the foreground.

Probably painted from memory in his Shoalhaven River studio at Bundanon, Wimmera Landscape with Fire and White Heron sensitively records sparse and sun-beaten plains that had been harnessed and domesticated over generations for the purpose of growing wheat. The equal weighting of the picture into two pulsating horizonal bands accentuates the expansiveness of the light-filled blue sky. While varying tones of creamy yellow and mustard delineate the land into the various stages of crop production, ending in a distant field of fecund sheaves.

While the painting specifically refers to the process of clearing, following the harvest of the wheat crop, it also forms part of Boyd’s more wide-ranging understanding and appreciation of Australia’s complex (and fragile) eco-system that has been managed by Aborigines for tens of thousands of years. Fire is a quintessential part of the Australian story and a regular feature in Boyd’s art. In Wimmera Landscape with Fire and White Heron, the slightly off-centre column of fire and smoke anchors the composition and forms part of a collective experience of the land: it augurs in a cycle of controlled burn, regeneration and renewal.  It was not until his visit to Central Australia in 1951 that Boyd encountered Aborigines at first hand. Only then did he become aware of the social and economic plight of Indigenous Australians and a more expansive view of the land, its history and its management began to ferment in his art and mind. 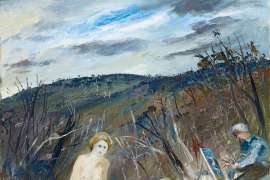