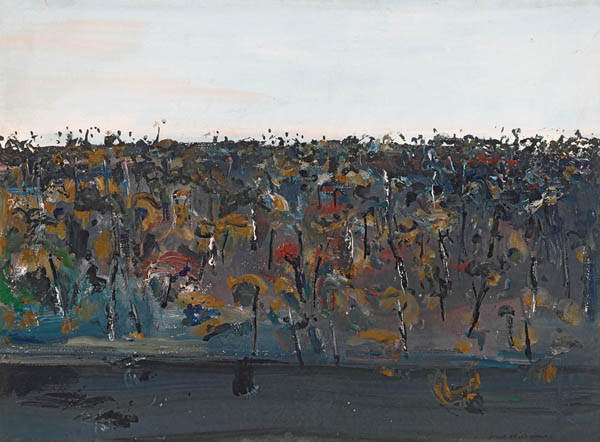 Having spent five years in London, Fred Williams returned to Australia in December 1956 to immerse himself in a landscape familiar in its strangeness.1 In dramatic contrast to the picturesque greenery of the English countryside, Williams observed an Australian landscape that was brown, flat and austere; devoid of any ‘constructed focal point’.2 Accompanied by this sense of Australia’s vast emptiness, however, was Williams’ appreciation of the landscape on an intimate scale – the minutiae of gumnuts, flaking tree bark and spinifex. As Sasha Grishin observes:

The implication of Fred Williams’ innovation was that he proposed an alternative way of seeing the landscape that took this contradiction into account, where we have the formal, flat structured outline […] contrasted with a precious complexity, irregularity and intricacy of detail.3

In the decade that ensued, Williams’ career would reach its apogee with his Upwey, You Yangs and Lysterfield series of landscapes, these works distinguished by their formal rigour and textural abundance.

Williams’ use of a sombre, earthy palette and strong horizon line in Untitled (Lysterfield series) is typical of the artist’s works from this period during the mid-1960s. The painting’s mid-section features a straggling mass of eucalypts and scrub, liberally rendered in shades of ochre and khaki. Williams’ loose brushwork is punctuated by the splintery vertical lines of tree trunks, glistening in the pale light of dawn or early dusk. The artist told James Mollison these depictions of foliage were influenced by French realist painter Gustave Courbet (1819 – 1877), whose ‘thick, impenetrable pastes of […] rocks and foliage’ Williams admired during his time abroad.4 The influence of Courbet and the Old Masters is further suggested by this work’s rich tonality. Land and water are united by subtle modulations of murky grey. As this dark underlayer appears to recede, paler sections of foliage and bark are projected to the painting’s surface.

Fred Williams’ gouaches occupied an important place in his creative practice. Most often rendered en plein air, Williams’ gouaches were typically considered ‘complete in themselves’, rather than ‘studies to be worked up into full-scale paintings at a later date.’5 Nonetheless, the gouaches frequently marked the first of several iterations on a particular subject. As Patrick McCaughey notes, ‘Although many of his oil sketches and gouaches are miracles of observation, their purpose was to furnish further pictorial possibilities.’6 Similarities in colour and composition suggest this painting may have formed the inspiration for several major works in oil, notably Lysterfield Landscape 1966, previously in the collection of Dr Peter
Elliott AM.7

Importantly, the relationship between Williams’ natural subjects and his painting was not straightforwardly mimetic. As Robert Hughes has observed, Williams regarded the Australian landscape not as a subject to be slavishly replicated in paint, but as a ‘vehicle for form’ – as stimulus for technical experimentation.8 Such is the authority of Fred Williams’ vision that he continues to shape our collective understanding of the Australian landscape.