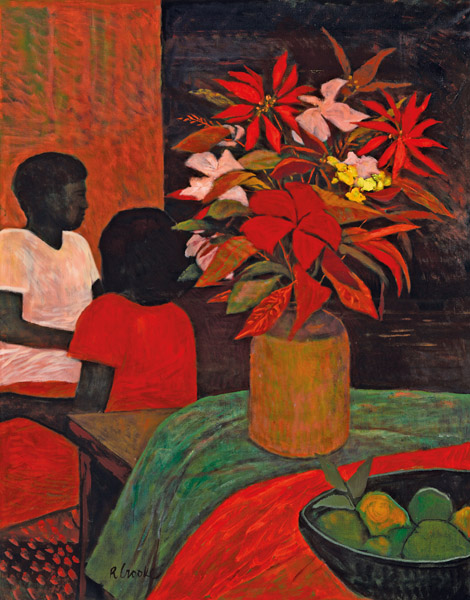 By Timothy Abdallah BA in Blog
Lot:
Islanders and Flowers

Ray Crooke’s eternal stillness, described by John Henshaw as ‘the perpetual South Seas dream’1 is a unique phenomenon in Australian Modern Art. His career, which spanned  more than 65 years began with his exhibition in 1948 at Melbourne’s Kozminsky Gallery. He was still painting a month or two before his death in 2015. In that time he had earned the friendship and respect of both artists and collectors as well as the people of North Queensland who are the subject of much of his work. This was in part due to Crooke’s work ethic and professional disposition. He was able to command exhibitions in Australia’s leading galleries: The Johnson Gallery in Queensland, Macquarie Galleries in Sydney, Australian Galleries in Melbourne and  Bonython Galleries in Adelaide – all were a natural fit for Crooke, and it was a sell-out exhibition of paintings held at Australian Galleries in 1959 that enabled Crooke to take the step of moving to North Queensland and settle there.

Crooke knew the area well, had become well acquainted with and travelled extensively through North Queensland while on his military service, including many of the locations he was later to make subjects of his art. He also travelled widely outside the area after the war, including Papua New Guinea, Tahiti and Fiji. Prior to the war, Crooke gained experience working in an advertising agency followed by studies at Swinburne Technical College in Melbourne which, together with his war work in a cartography unit, formed a solid foundation for pursuing art professionally. Crooke’s art, even at an early stage, reveals an independent mind.

After the war Crooke settled for a time at Yorkey’s Knob in Far North Queensland where he eked a living dyeing fabrics which could be sold to tourists and travellers, as well as diving for trocus shells and part time work for the Anglican Mission on Thursday Island. He learnt screenprinting and later started a textiles  business - all of these varied pursuits and efforts contributed to his work as an artist.

Private studies, chance meetings and encounters with cultivated individuals provided him with the material and impetus he needed to forge his distinctive style. He studied art books and it comes as no surprise to learn that artists such as Gauguin (1848-1903) made a contribution, while the early Renaissance masters such as Giotto (1266-1337) and Fra Angelico (1395-1455), with their direct address and elegant dignity also played a formative role in his early years.

During the early 1960s his work became better known and was recognised when he was invited to participate in the major international exhibitions of Australian art that toured the world. He counted amongst his good friends artists such  Russell Drysdale (1912-1981) and Margaret Olley (1923-2011) and writers such as George Johnston (1912-1970). Crooke’s portrait of Johnston won the Archibald prize in 1969.

His acquaintance with Russell Drysdale left its mark and at his death, one of Crooke’s prized possessions, his own  Drysdale painting was gifted as part of his collection to the Perc Tucker Regional Art Gallery in Townsville.

It is entirely within keeping of his character that success as a painter enhanced and confirmed Crooke’s philosophy and working methods. Travel, and visits to the world’s great museums were momentous, and yet he stayed true to the ideas that had motivated him at the outset. Calm, stillness, balance and order are the basis of his work, and restraint and dignity are the means Crooke used to achieve his life’s art.

Timothy Abdallah BA
The author would like to thank Lachlan Henderson and Philip Bacon Galleries, as well as Jo Lankester and The Perc Tucker Regional Art Gallery for their help in preparing this essay.