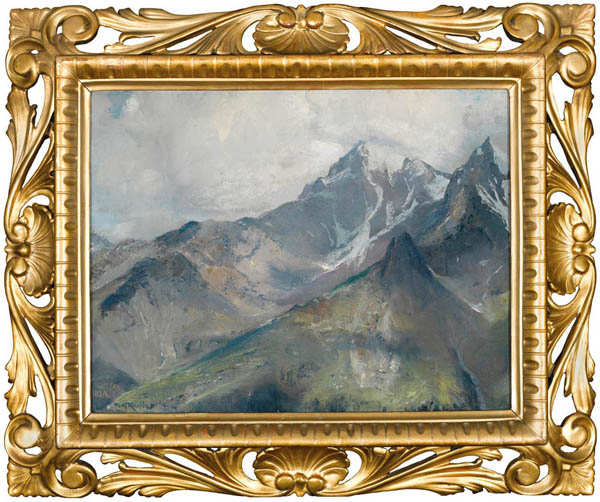 Tom Roberts painted Pizzo dei Piani in 1913 while staying in Italy with friends near Lake Como, in the country’s North. The lake and the surrounding countryside and Alpine scenery which are the feature of this painting were the subject of a series of works exhibited at Walker’s Art Gallery, 118 New Bond Street, London in the following year. The exhibition, which was modestly successful and the occasion of a Royal visit by the Queen, opened on the 2nd February. A few months later, Roberts returned to Italy but this time the trip was cut short by the outbreak of the war and he returned to London. At fifty-eight years of age, he then joined up and spent the following four years serving as a medical orderly.

Pizzo dei Piani depicts the distinctive peaks (3150 metres above sea level) of the locality, about one and a half hours north of Como. The location straddles the border with Switzerland.  Roberts stayed at a local albergo. Nowadays the spot is popular with hikers, climbers and skiers.

For Roberts, the hills provided a subject which suited his temperament and taste for understatement which is evident in his work at this time.1 This restraint and modest disposition of Robert’s painting in these years has been the subject of controversy and variously attributed to the after-effects of the strain of producing his magnum opus, The Opening of the First Parliament of the Commonwealth of Australia by HRH The Duke of Cornwall and York, May 9, 1901 or alternatively his disinterest in the clamour of new art and ideas from France and elsewhere that plagued him. For either or both of these reasons, Roberts response was to revert to or to take refuge in Naturalism. Pizzo dei Piani can therefore be seen as an assertion of independence.
Roberts was at all times inclined to draw on his own resources. An essential element of this was the support of his wife, Lillie.

This support found a most apt and material expression in the finely worked and elaborate frames which she designed and carved and which are a feature of many of Roberts paintings of this time.