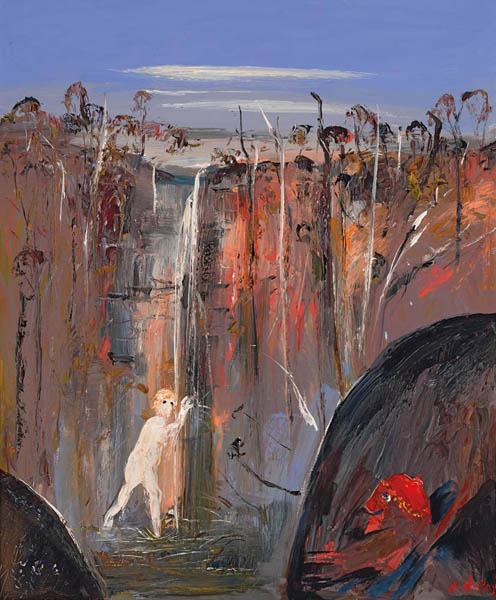 By menzies in Blog
Lot:
Woman Bathing in a Waterfall (Susanna and the Elders)

Throughout his oeuvre, Arthur Boyd made use of allegorical themes to make comments on universal concepts of love, vanity, racism, poverty, war and death. In the present work, Boyd interprets the story of Susanna and the Elders, from the Old Testament Book of Daniel which recounts the dramatic tale of the beautiful and pious Susanna. She is the wife of the wealthy and respected Joakim, at whose house elders gather daily to judge the people’s cases. One day, two of the elders see Susanna bathing alone in a walled garden and conspire to blackmail her. The elders proposition Susanna and threaten to report that she was meeting a young man in the garden should she resist their advances. Susanna refuses to be blackmailed and is consequently sentenced to death for adultery. When the elders are separately questioned regarding the alleged adultery, their accounts differ and their lies are exposed. The false accusers are put to death and virtue triumphs.

In the present work, Woman Bathing in a Waterfall (Susanna and the Elders), Boyd sets the story against the backdrop of the Shoalhaven River, where the artist lived for the last two decades of his life. There was an abundance of dramatic natural features in the vicinity of their home, Bundanon – the wide, snaking river; steep, craggy rock faces; thick, scrubby bush and enchanting natural springs. The waterfall presents a perfect opportunity to depict the story of Susanna which Boyd has done here in the style that is characteristic of his mature phase. The landscape is recognisable as that of the Shoalhaven with its steep hillside, populated with slender gumtrees and boulders. Here, Boyd depicts Susanna bathing beneath the waterfall on the banks of the Shoalhaven. In the lower right corner, a mythical beast watches on, representing the elders. The story has been painted by many artists throughout history; Lorenzo Lotto’s version (1517) housed in the Uffizi, Florence, and Artemisia Gentileschi’s depiction of Susanna (c1610), reportedly her first known painting, in the Schönborn Collection, Germany.

Boyd interpreted stories from the Book of Daniel at different stages throughout his career, incorporating icons from these accounts into his paintings. The artist’s depiction of the stories relate to his fascination with the visionary art of William Blake (1757-1827) also to memories of graphic biblical stories read to him as a child by his grandmother. Imagery from his past was entangled with fears and concerns about contemporary realities: the atom bomb, nuclear testing and the self-immolation of protesters at the time of the Vietnam War.

Woman Bathing in a Waterfall (Susanna and the Elders) straddles the genres of allegorical and landscape paintings – here, the artist sets the Old Testament story against the dramatic Shoalhaven landscape. Arthur Boyd has become one of Australia’s most well-known and loved artists of the twentieth century. He produced an immense volume of work, continuously developing his style over six decades however maintaining his own characteristic sensibilities. Boyd’s art is collected privately across the world and also features in the permanent collections of Australian and international art institutions.