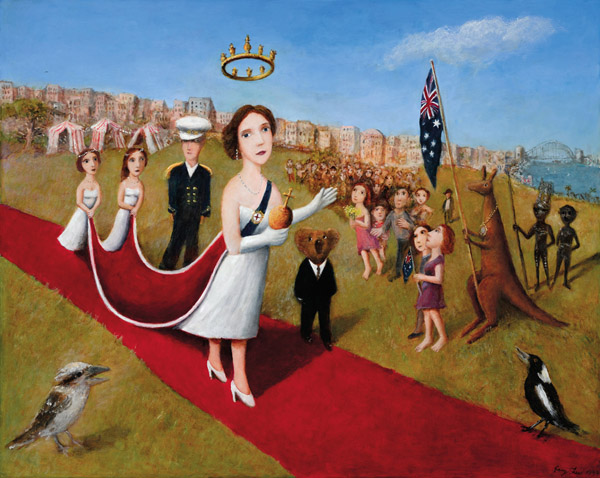 Although Garry Shead could be broadly described as a republican and his Royal Suite paintings promptly entered the Australian republican debate of the late 1990s, this was not the primary intention of the series. It had been a long time in the making, in fact about forty years, and employed the metaphor of the royal visit of 1954 to explore a wide range of themes. Implicit in the series is a discussion of childhood sexuality, the oedipal complex with the related patricidal wish and the desire to reclaim the queen. In a sense they are also history paintings, looking back to the Australia of the 1950s when the omnipresent figure of Menzies dominated so much. Underpinning this series is an awareness of the cold war and the Petrov affair, John Anthill's pioneering ballet Corroboree, which was commissioned for the royal visit and which brought the heritage of Aboriginal music and dance into mainstream cultural life, and also the whole complex tapestry of Australian society of the time. The Royal Suite paintings reflect something of a naive innocence of vision, something which was possible when seen through the eyes of a twelve year old boy.1

When Queen Elizabeth II visited Australia in February 1954, she was the first reigning monarch to set foot on Australian soil. During this visit, her itinerary included the Australian Capital Territory, New South Wales, Tasmania, Victoria, Queensland, South Australia, Western Australia and seventy regional towns. It is estimated that the monarch travelled over sixteen thousand kilometres during the visit allowing some seventy five percent of the Australian population to see the Queen at least once during the tour. The support shown by the public during Queen Elizabeth II’s visit was expressed by the then Prime Minister Robert Menzies in the following statement, ‘It is a basic truth that for our Queen we have within us, sometimes unrealised until the moment of expression, the most profound and passionate feelings of loyalty and devotion. It does not require much imagination to realise that when eight million people spontaneously pour out this feeling they are engaging in a great act of common allegiance and common joy which brings them closer together and is one of the most powerful elements converting them from a mass of individuals to a great cohesive nation. In brief, the common devotion to the Throne is a part of the very cement of the whole social structure.’2

The Queen in Australia presents a tableaux of Shead’s royal iconography. While the participants appear recognisable through their attributes and insignia, things are not what they seem. The monarch glides down a red carpet with a regal train draping behind her, held by two attendants. Prince Philip follows behind in naval regalia: could the artist be depicting his own boyish admiration through this character, paying homage to his white goddess? The presence of the Blinky Bill koala and kangaroo are reminders of the stark contrast between the monarch’s green, pleasant pastures and this strange, new, sunburnt country. The familiar Sydney skyline stretches across the horizon with the harbour and bridge beyond. There is an absurdity in the placement of Shead’s white goddess amongst this motley mix of characters: ‘if Australia appeared strange, monstrous and grotesque to the Queen, the white goddess herself appeared as strange and not belonging to this land.’3

In The Queen in Australia, an element of farce prevails, as the Queen makes her way down the red carpet flanked by a koala, dog and kangaroo while her loyal supporters look on. Here the dominant mood is one of sensuous lyricism and a celebration of child-like innocence. Garry Shead is one of the finest romantic, lyrical figurative artists to have worked in Australia. Through his outstanding technical mastery in this painting, he creates a work of visionary power which is of a very high order.