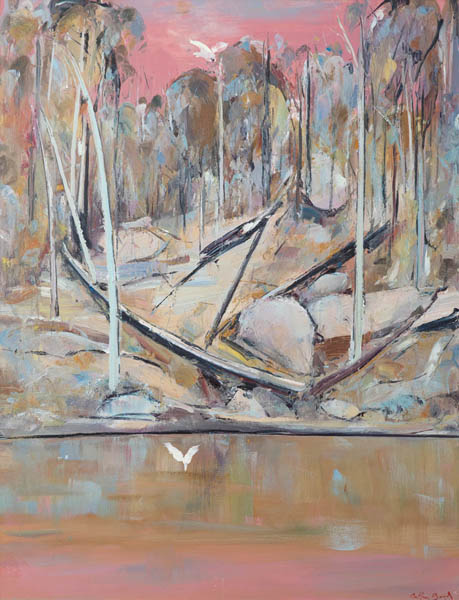 The life and career of Arthur Boyd has been celebrated in countless exhibitions and documented in biographies, catalogues and journal articles going back to the early 1950s. The lives and influence of the wider Boyd family is the stuff of Australian legend and in that story Arthur sits at the very centre. In a manner not uncommon in mid-twentieth century Australian art, Boyd rose to prominence while living on the other side of the world, a permanent resident of the United Kingdom for some twenty years. His style and work reflected the places in which he lived and worked, each period being defined by a particular look and spirit, changing with the climate and landscape of the places he called home. As a young man, it was his life in outer suburban Melbourne and the Mornington Peninsula that was the subject of charming and acutely observed landscapes. Wartime saw him often on the road to Bendigo or at home in suburban Melbourne and the menace of war infused his expressive and surreal reflections on the tortured soul. Later travels took him to the south coast of New South Wales and Victoria’s Wimmera, a place of sun-bleached fields and the distant Grampians. His work in the UK saw a distillation of his Australian experiences, overlaid with his own very personal reflections on the darker underside of life, expressed through conventional biblical stories and telling home-grown legends, such as the troubling tale of the mixed race bride and groom.

In 1975, Arthur and Yvonne Boyd made a life-changing decision to return to Australia after a long and successful sojourn in rural Suffolk. This was not a sudden whim to be back home, but an idea that had been brewing since 1971 when they visited Arthur’s Sydney dealer Frank McDonald at Bundanon, his property on the Shoalhaven River just inland from Nowra on the south coast of New South Wales. Bundanon was a special place and they were drawn to its beauty and charm. McDonald lived in the beautiful two storied stone homestead that had commanded the vista since 1869. The Boyds were able to purchase the neighbouring property Riversdale and, after restoring the small homestead, used it as a local base. A few years later McDonald decided to sell Bundanon and they moved into the ‘big house’ on a permanent basis. It was the beauty and grandeur of the site that drew them to Bundanon and Arthur soon made it his prime subject. Bundanon has an enticing mix of landscape elements that kept him busy for the rest of his long career. The homestead sits on the cleared river flats, looking across the broad river to the steep cliffs on the southern bank. To the north the densely forested hills rise up sharply, creating a sheltered valley that seems totally isolated and remote, despite being less than ten kilometres up-river from Nowra.

Boyd painted the view across the river to the Shoalhaven cliffs countless times, each time finding new ways to interpret the mix of huge boulders and tall trees. The smooth, dark waters of the river provided the perfect foil for the stark white gums on the cliff, to be interpreted in everything from huge canvases to jewel-like miniatures on sheets of burnished copper. The cliff changes constantly, according to the passage of the sun, from misty softness in the early light to the glare of midday and the glow of sunset. Pink Shoalhaven Landscape is a classic Bundanon image, the sky a rosy glow above the fallen trees on the cliff, a moment of contrast being found in the two white birds, one a cockatoo screeching above the river while the other, perhaps an egret, dips down to the still waters. In every way, the painting captures the artist’s deep love for the particular place he had chosen to spend the last quarter of a long and productive life.