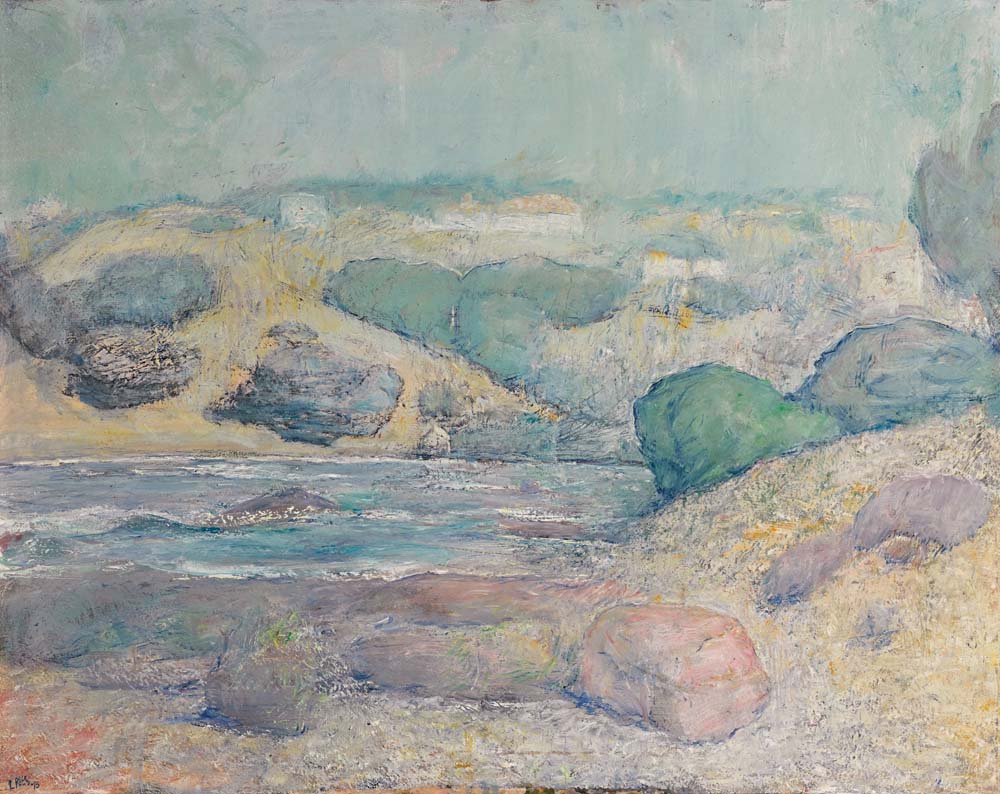 The extraordinary exhibition of drawings at the Museum of Sydney1 earlier this year was a wonderful reminder of Lloyd Rees’ exquisite skill as an artist. These precise lapidary views done in the early 1930s stand in contrast to the work from his final years, more than five decades later. Between these highly prized early drawings and his last, ethereal views of Tasmania, we can observe how a tenacious and dedicated landscape painter produced what came to be amongst the best-loved Australian paintings of their age.

Lloyd Rees was born in 1895 and began making art as a teenager. By the 1930s he focussed on recording both the surface and underlying structure of things. A trip to Italy in 1923 confirmed in him the idea of landscape that is humanised as a backdrop for the activities of Mankind. In the ensuing years, Rees retained the sense of wonder and awe of a place, its beauty, both natural and man-made. His work demonstrates the importance of treating the subject truthfully and represents a simple expression of his respect for it. At the end of his long and distinguished career, partially due to the effect of age on his eyesight, Rees’ work changed in order to draw out the spiritual qualities of a site and by focussing on atmospheric effects by use of gestural techniques, sought to transcend its appearance to reveal its soul.

The progress of this evolution can be charted by Rees’ travels through rural and coastal New South Wales. Less noticeable in his work is his interaction with other artists and artistic developments outside Australia. Rees’ career spanned the development of modern art. He was a first-hand witness to the triumph of Impressionism, and later, post-impressionism, cubism, abstraction, modernism, contemporary, and post-modernism. From the outset of his career, he retained an open mind and participated in debates regarding new trends, after which he returned to his own work not completely unaffected. Any assimilation of innovation was, however, done on his own terms and in a measured way.

A natural development for an artist of his disposition was the creation of idealised landscapes, and for a time in the 1960s, Rees also explored and painted invented landscapes as distinct from observed ones. His career represents a quest to understand the subject by studying it from every angle. It seems appropriate for a painter of his character that one of the high points of this quest should now be widely recognised in a relatively inconspicuous work, his famous The Road to Berry, painted in 1947.  This small, unassuming painting now hanging in the Art Gallery of New South Wales sums up the character of the artist, as well as his ability to draw out the special qualities of a simple road, curving across the side of a hill in an otherwise unremarkable corner of New South Wales.

It was Rees’ character as well as his art that set an example to a generation of painters. Brett Whiteley (1939-92), whose distinctive line, whether painting the landscape, the nude or a fruit dove, was deeply affected and his work is a continual reminder of his admiration for the character and work of his friend, Lloyd Rees.

Southern Summer was painted by Rees when he was in his mid-70s and an eminent, established figure. He was preparing for a major exhibition of his work at the 1975 Adelaide Festival. Correspondence between Rees and Gordon Thomson, who bought the painting, provides us with an insight to Rees as he reminds the buyer that the sale is conditional. ‘I’m glad I can rely on it for the Adelaide exhibition as I must frankly state that without this assurance I could not have let the work go’. Rees also comments: ‘There is not much I can tell you as to subject and intention. It belongs to my favourite area – Omega & Gerringong, on our South Coast (New South Wales), an area in which almost all natural features are known to me. In latter years I have tried to paint the spirit of the place…’2

Through his work and his life, Lloyd Rees reminds us that landscape painters perform a function of pointing out, through their work, the fundamentally positive aspects of human existence.