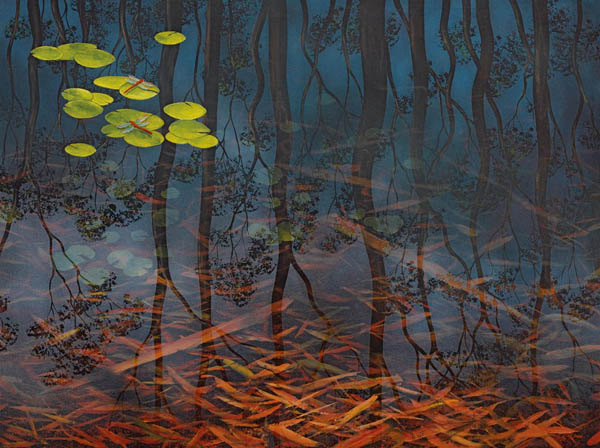 By menzies in Blog
Lot:
Fish and Ripple - Dingo Springs I

In an increasingly uneasy and splintering Australia, Lin Onus has, in his two serene paintings Fish and Ripple - Dingo Springs I and II created a peaceable kingdom, a tranquil oasis (or billabong in this case) of refuge and calm. He was a self-taught painter, but hardly naive, growing up in environment both challenging and sophisticated. His father, Bill Onus, was a well-known figure in Melbourne – a maker and merchant of aboriginal designs, selling ceramics, fabrics, wrapping paper and boomerangs from his Belgrave (Dandenong Ranges) based business, Aboriginal Enterprise Novelties, in the early fifties. Bill was equally known as orator, activist and unionist. The name of Melbourne’s cultural festival, ‘Moomba’, is credited to Onus senior and reputedly has other meanings than ‘Let’s get together and have fun’. Lin Onus inherited his father’s subversive wit as well as his belief in social change. And despite the tranquil appearance of this beautiful pair of paintings, they are charged with an activist sensibility.

Onus’s paintings owe a debt to both his parents. His mother, Scottish born Mary McLintock Kelly, took art and politics as seriously as his father and Onus absorbed European culture and Indigenous tradition in a way that was almost unique in Australia. Brought up on the notion that it was responsible to shift the political patterns of society, Onus promoted change using his art.

As an artist who straddled two cultures, Onus intertwined oppositional and harmonious elements in his work. His brilliance was to play the seamless realism of European painting technique off traditionally rendered Indigenous figures, producing a frisson of difference and a potent politic. Fruit Bats 1991, perhaps his most loved work, brings together two worlds in pointed wit, presenting an iconic Hills hoist laden with innumerable flying foxes painted with indigenous patterns. He was granted permission to use traditional cross hatching or rarrk in the eighties after regular visits to Arnhem Land where he connected with the roots of his Aboriginality. He became an initiated man through his friendship with senior artists Jack Wunawun (1930-1990) and Johnny Bulun Bulun (1946-2010) and this allowed him to identify with, and use, clan motifs and totems.

Fish and Ripple - Dingo Springs I and II provide a delightful and sensitive example of this approach. The two paintings show the still waters of a billabong in a virtuoso demonstration of Onus’ photorealist technique to capture the intricate life of the springs. These two works were painted in 1995, following the artist’s trip to Judbarra/Gregory National Park in the Northern Territory, to retrace an expedition of botanist Ferdinand Von Mueller (1825-1896). Onus and John Wolseley (born 1938) were the two artists chosen to accompany the botanists and both produced shows from the trip upon their return.The artist’s delight in recording detail of the environment is evident here. Light filters down, illuminating patches of the water in the shady lagoon. Particularly notable is the penetration of light downward through the limpid water to reveal the leaf-littered bottom of the pool but also the reﬂections of the towering red gums trees, and sky. Dancing in the golden sunlight are two vermillion dragon ﬂies, creatures of the air, touching the water’s surface in one painting. As if in response, the second work shows a fish emerging from hiding to nudge the air above the billabong. The fish, almost a signature in Onus’ work, is cross hatched. There is an indigenous presence in the forest, a counter-point to the European perspective that describes the landscape.

A talented landscape painter, Onus measured himself against the best while recognising the limitations of his mentors. The great works of the national school promoted a Eurocentric view of history, and contemporary landscape painting had lost credibility in the encounter with Modernism. ‘Australian painting’, according to Onus, was ‘Sheep on the right and a gum tree on the left and when you were feeling adventurous, you put the sheep on the left and the gum tree on the right’.1 Onus provided an alternative vision, combining the traditions of European and indigenous art to fuel the biting humour of his own brand of storytelling. Fish and Ripple - Dingo Springs I and II are certainly more than a display of technical prowess. Onus can offer poetry but it’s never without politics.

In many ways the paintings depict the image of an Australian paradise: shade, water, sun-dappled colour, the scent of eucalypt, the hum of nature and soft sound of a ripple in the water. The leaf filtered light reflects the sky, illuminates the water and reveals, below the water surface, a hidden realm. The mix of sensory prompts and the rhyming kiss of dragonflies and fish to either side of the transparent littoral of water and air suggests Onus wants the viewer to see beyond surfaces. We are encouraged to see as the artist does, with Aboriginal and non-Aboriginal eyes. Seeing with the eyes of both his parents, Onus offers us a form of reconciliation. He reveals a world of heightened perceptions, a dreaming place, a sanctuary for personal reflection where memories and the legacy of history can be found. It is appealing to think that the rarrk-decorated fish, Onus’ signature character, which in this painting peers from one realm to the next might, be a form of self-portrait. As an initiated man, he noted of the creatures - the bats, fish, moths and dingoes that populate his paintings - ‘They’re part of me and I’m part of them now.’2

Fish and Ripple - Dingo Springs I and II were amongst the last paintings that Lin Onus made. He died tragically young, aged only forty seven, just as he began to be appreciated as a major figure in Australian art. His mature work, the large canvases featuring cross hatched fish and other native creatures in flooded landscapes were painted in the last decade of his life have an arresting beauty and an enduring appeal but are relatively few in number. Many are already in public collections, so the appearance of this harmonious pair of paintings presents a rare moment of opportunity for the Australian market.