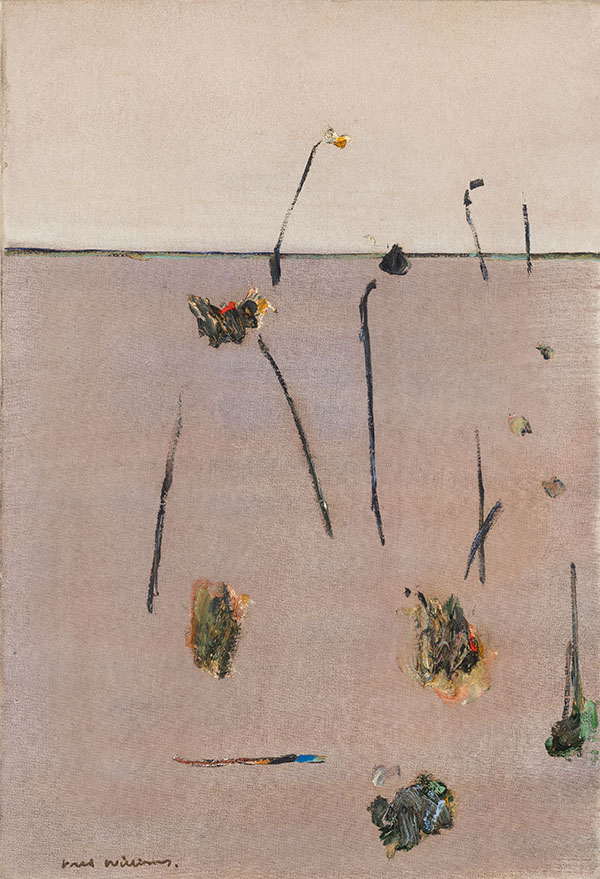 Gum Trees in Landscape III is a fine example of Fred Williams’ mature work and the diversity of his practice. This gem of a picture forms part of a celebrated group of paintings, prints and drawings that begin with his You Yang pictures in 1963 and continue in the Upwey and Lysterfield landscape-based works from the mid to late 1960s. Williams’ long-held interest in the aesthetic of traditional Asian calligraphy, an early appreciation for the dense colour palette of nineteenth-century French Realist painter Gustave Courbet (1819-1877), and awareness of the uniform surfaces of 1960s international colour-field abstraction combine with his aim to reveal the Australian landscape through paint.

The 1960s proved to be a watershed for Fred Williams. In solo and group exhibitions, he continued to build on his reputation as being one of Australia’s most important and innovative painters, and was included in all the major international travelling exhibitions of Australian art. In mid-1964, Williams travelled to Europe for seven months with his wife Lyn, under the auspices of the prestigious Helena Rubinstein Travelling Scholarship. Returning to Australia in January 1965, the two re-settled on two acres of land and a small house and studio at Upwey in the Dandenong Ranges, outside Melbourne.

The paintings that make up the Gum Trees in Landscape series were worked on in 1966 and then again in late 1968.1 They have their genesis in etching subjects, and in paintings, gouaches and drawings produced at Upwey and from painting excursions to nearby Lysterfield. Williams had begun to explore Lysterfield during mid-1965 when he would be driven there to work on the weekends. The surrounding rolling hills contrasting with flat, fenced farmland and patches of dense scrub interspersed amongst open countryside appealed to Williams. The polarities he experienced there touched a chord, though he was also conscious of how this landscape was undergoing a process of change.2

When seeing the Upwey and Lysterfield paintings and gouaches for the first time Williams’ contemporaries were quick to recognise their importance. In Sydney, critics Elwyn Lynn, Wallace Thornton and John Henshaw valued them as exciting, new interpretations of the Australian landscape. Henshaw noted that everything in the show had ‘… greater assurance and intensity than before’.3

Writing in a similar vein, the respected artist and critic James Gleeson focused on Williams’ adroit placement: ‘each spot or squiggle signifying a tree or tree-trunk forms part of a constellation whose pattern seems haphazard, but whose placement is ordained by one of the most refined aesthetic sensibilities of our time.’ Gleeson followed this with higher praise in a 1969 review of an exhibition at Rudy Komon Gallery, Sydney: 'In these marvellous paintings’, which included a Gum Trees in Landscape painting, ‘Williams proves himself to be the most subtle and penetrating of all our Australian landscape painters.'4

Gum Trees in Landscape III exemplifies the more pared back approach to painting that emerged in Fred Williams’ work over 1966-68. The picture features a muted steel-grey background separated into two luminous bands and an empathic horizon line that separates it into 1/3 for the sky and 2/3 for the land. Over this perfectly proportioned composition, Williams introduces his signature vocabulary of abbreviated charcoal lines, punctuated marks and bright colour dabs applied in tints of red, yellow and blue. Tree trunks and foliage are reduced to a musical like notation, with each element strategically placed to reinforce the position and direction of the other. The result is a beautifully weighted arrangement with a fine-tuned optical tension.

Gum Trees in the Landscape IV, commenced around the same time, continues in a similar style. James Mollison commented on the way Williams turned his paintings upside down and placed wires across his outdoor pictures to make sure the individual elements all worked in concert, often based on diagonal lines that established key focal points within each picture.5 These two studio-made pieces were worked from oil studies and gouaches, projecting a greater feeling of openness and a boundless space that continues beyond the frame. This separates them from earlier works around the same subject and brings them closer in spirit to the You Yang paintings of the early 1960s, as well as foretelling the Australian landscape series of 1969-70.

The relationship between Fred Williams’ paintings and etchings is also important in this context. Gum Trees in Landscape III has strong formal and technical associations with his 1965-66 etchings including the various states and impressions of Gum Trees in Landscape Lysterfield and Chopped Trees (in the National Gallery of Australia collection). Williams adapts the varying plate-tone in these prints to produce an even all-over surface in the painting and to differentiate between ground and sky. The translucency of Gum Trees in Landscape III is achieved by applying and rubbing successive coats of heavily thinned down oil. Williams also experiments with landscape elements as composed splotches of heavily laden paint. This is adapted from etching techniques such as aquatint, and open bite, in which areas of the printing plate are exposed to acid with no resist.

In a recent essay, Patrick McCaughey, one of Fred Williams’ oldest and most esteemed supporters, challenged the view that there was a single line in his work that moved from painting to painting, and from one series to the next. He proposed that many of the revered Australian artist’s finest works fell outside this trajectory. In the spirit of curator Deborah Hart’s definition of Williams’ art based on ‘dialogues across series’, we recognise that ‘… Williams, who worked on many canvases, even different series, simultaneously, sought to incorporate disparate elements into a single work’.6

Gum Trees in Landscape III is exemplary of this multifarious approach. It combines his experimental approach to printmaking, the discipline of studio-based painting and subjects related to his gouaches and drawings done in the field. There is a frisson of excitement that we experience when we come face to face with such a work.