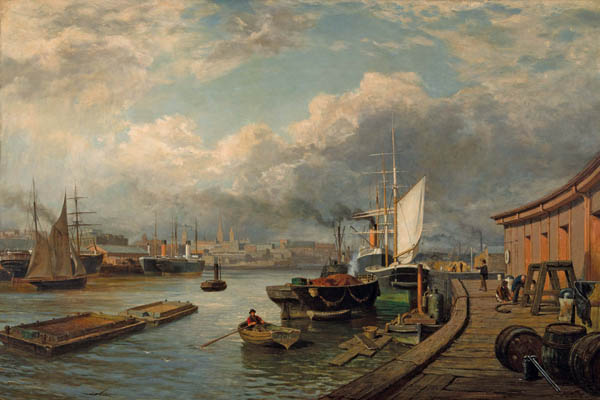 James Clarke Waite’s Melbourne 1888 shows a section of the Yarra River from the south wharf looking east toward the city centre. Like Fred McCubbin’s (1855-1917) better known painting from that year Melbourne in 1888, a work subsequently cut in half, Waite’s picture focuses on the large vessels that could now safely travel up the river to the turning circle in front of Customs House. The painting was enthusiastically singled out by contemporary critics for its restrained mid-Victorian style and for chronicling the transformation of Melbourne’s city centre and docklands into a thriving metropolis.

Melbourne in the 1880s was a growing maritime city. Its economy had been greatly enhanced by the widening and deepening of the Yarra River – a process that had commenced in the 1870s and was finally completed in 1887.
During this time, the Yarra River, south of present-day Princes Bridge, had become a favourite subject for artists. Older, established colonial painters such as Louis Buvelot (1814-1888) depicted the small pockets of nature still remaining along the increasingly busy banks of the river. New arrivals such as the Italian Ugo Catani (1859-1944) painted gritty, grey and steam-laden scenes, portraying the grime and sludge emanating from Melbourne’s rapid industrialisation. Australian Impressionist artists, Arthur Streeton (1867-1943), Tom Roberts (1856-1931) and McCubbin, found a visual poetry in the rich cacophony of colours, changing light and atmospheric effects found along the river.

In his painting, J.C. Waite was equally concerned with evoking Melbourne’s maritime culture as well as providing a realistic description of the adjacent city centre. The work was titled A View of Melbourne when it was first shown at the Melbourne Centennial International Exhibition from August 1888 to January 1889. It was an apt title. The Centennial exhibition had been organised to celebrate a century of European settlement in Australia, with a focus on advances made in music and painting.

Art critics were quick to praise the work of those artists who they felt best represented the city and its achievements. Melbourne was placed in this category and compared with Fred McCubbin’s riverside masterpiece The City’s Toil 1887; a work hung adjacent to it. In Melbourne, the four-sided Town Hall clocktower is clearly visible in the distance. Beyond that, to the right, are the Gothic spires of Scots’ and other Melbourne churches including The Independent. There is also the incomplete St Paul’s Cathedral which was situated on the eastern corner of Swanston and Flinders Street – work had halted there in 1888 and its iconic spires were not built until several decades later – along with other prominent buildings and landmarks.

Kept in the artist’s possession, Melbourne was re-exhibited on four separate occasions in the 1910s and 20s. According to the Herald critic, it was ‘the principle picture’ in a ‘large and varied collection’ of works that was assembled for a private viewing at the Guild Hall, Melbourne, in 1908. Renamed View of Melbourne (Before the Boom), the writer found favour with the ‘striking sense of realism’, while noting that it ‘predated Prell’s buildings and other skyscrapers [that had since] appeared’.1 Critic, A. Colquhoun also claimed the work as one of the most prominent in an exhibition held at the Athenaeum Gallery six years later. Waite was commended for his ‘dignity and sincerity’ as a painter and Melbourne specifically singled out for its ‘historical interest as recording the change which the years have made in the city skyline.’2

English born and trained, J.C. Waite commanded high prices for his work when he established himself in Victoria from 1886. Noted for his ‘conscientious work and quiet style’, he was seen to excel in portraiture, genre painting and landscape. Melbourne 1888 is one of his largest and most ambitious Australian landscapes. It has an interesting and varied exhibition history that reflects how attitudes toward art and the urban milieu changed as they progressed into the twentieth century.