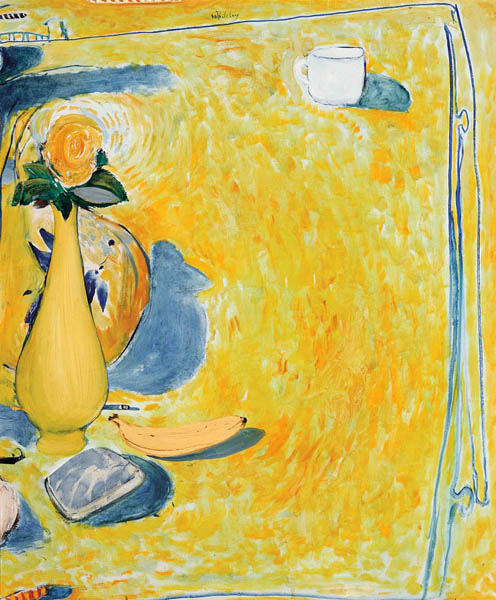 By menzies in Blog
Lot:
Still Life with Banana

Brett Whiteley’s sensuous, light-filled interior and still life paintings produced in Sydney during the mid-to-late 1970s represent a high point in the formidable oeuvre of this revered Australian artist. Menzies has been fortunate to present two of the most important of these paintings over the past few years – The Orange Table 1977-78 and Table and Fruit 1978. We can now offer Whiteley’s equally significant Still Life with Banana 1977.

It is easy to see why Still Life with Banana has been so tightly held over four decades, having had only two owners since it was first exhibited at the prestigious Fischer Fine Art, London, in 1977. The painting resonates with the warmth of the afternoon sun reflected off Sydney Harbour and is redolent in its life-enhancing perspective of the Lavender Bay home and studio that Whiteley shared with his wife, Wendy. It is rendered in an eye-catching palette of pulsating ultramarine blue contrasted against an expansive field of lush yellow. Aside from being a masterly expression of Whiteley’s absorption of the still life genre, Still Life with Banana also reveals his longstanding regard for the work of Vincent van Gogh (1853-1890) and Henri Matisse (1869-1954). Whiteley periodically turned to these artists in order to gain valuable insights and to re-calibrate his ideas.

Brett and Wendy Whiteley returned to Australia in late 1969 after having spent nearly ten years abroad. They rented and then eventually purchased the house at Lavender Bay. The house and overgrown garden became the focus of their life and a strong proportion of Brett Whiteley’s painting activity. Lavender Bay was a much-needed sanctuary for the Whiteleys after the social and political turbulence they had experienced in New York and a brief but ill-fated visit to Fiji where the artist had been ejected for possessing illicit drugs.

The expansive views of the harbour and garden below formed part of everyday life at Lavender Bay. The upper floor studio and living area was swathed with a rich cache of common and exotic objects, richly patterned furnishings and many of Whiteley’s own artworks. Many of these paintings, drawings, prints and sculptures were still being worked on – Whiteley liked to have them close at hand so that small changes and additions could be made. Using all the elements at his disposal, Whiteley embraced the motif of the studio interior and open window to convey the symbiosis between inside and outside: the ambience of the house and its concord and/or discord with what lay beyond.

The 1970s mark a period in which the volume of sales and critical acclaim of Whiteley’s work coalesced. Whiteley had set the art world alight in 1976 when his magnum opus Self-Portrait in the Studio 1976, won the Archibald Prize. It was acquired by the Art Gallery of New South Wales the following year. Equally impressive was Interior with Time Past 1976, acquired by the National Gallery of Australia in 1978.

Both of these signature paintings feature views of and from Whiteley’s studio and highlight the importance of the Lavender Bay interior to his state of mind and the development of his art. The first of these paintings bathes in the sumptuous ultramarine blue of the harbour but contains a darker side that was later articulated by Wendy Whiteley: ‘… he was warning himself and other people watching. It was the cage of his interior, his addiction, the window or a glimpse of possible escape into paradise: the escape from one’s psyche.’1 In contrast, Interior with Time Past evokes a sensuous world of pleasure and self-gratification. The windows are thrown open to reveal the Whiteley’s private world, complete with a table for two, and a view that extended outward toward the golden glow of the water and palm trees below. There is a sense of tranquillity and of the artist at peace with himself and the world, even though we know this was only a transitory or fleeting feeling.

Still Life with Banana is more in keeping with the mood and intent of Interior with Time Past and alludes to what Whiteley described around this time as ‘points of optical ecstasy, where romanticism and optimism overshadow any form of menace or foreboding’.2 Significantly, both these works were exhibited together in Whiteley’s exhibition in England, along with two other still life/interior paintings Camellias and Camellia with Cherries, both painted in 1977. Each of the four works struck a note of positive energy. They featured colour schemes consisting predominantly of orange and/or yellow. Barry Pearce observed that they ‘exude an equilibrium and the sumptuous ecstasy of living.’3

Though a deceptively simple subject that eschews darker or political connotations, Still Life with Banana is complex in its composition and in the optical relationship between line, form and colour. Depicted in the left foreground are a vase and rose, banana and slice of bread. Whiteley places the ensemble of objects off to one side and deliberately cuts off other partially painted forms placed on the dining room table as a daring compositional device. On the right side of the work is a single coffee cup, painted stark white. This has symbolic significance and has been introduced by the artist as an important anchor point. Set well back on an oblique angle, the cup attracts and then re-directs the eye of the viewer back towards the left corner of the table. Like life itself, the work engineers and maintains a perennial equilibrium between concord-discord, flatness-depth, push-pull.

Although we recognise these innovative pictorial techniques as quintessentially Whiteley, we also know that he had also absorbed the late nineteenth century paintings of Vincent van Gogh (1853-1890) and early twentieth century paintings of Henri Matisse (1869-1954). Like Matisse, in his famous The Red Studio 1911, from the collection of MoMA, New York, Whiteley confounds conventional expectations about how objects could or should be represented in space. Whiteley reverses the order of Matisse’s placement of objects in The Red Studio and replaces his sonorous red and white outlines with a luminous field of yellow, contrasted against blue.

Whiteley looked to Matisse for inspiration on how colour could be spread to create an all-over, visually integrated composition and joyful mood. At the same time, he adapted elements of Vincent van Gogh’s energetic and often swirling brushwork to create equally dynamic compositions that emphasised the range of human emotions. The table-top in Still Life with Banana is thus transformed into an energetic mass of individual strokes. This technique reaches a crescendo in the swirling mass of the rose petals and the white heat or waves of energy that radiate from it. As Van Gogh put it: ‘How wonderful yellow is. It stands for the sun.’ In his painting, Whiteley effectively brings the radiance and warmth of the sun indoors.

Brett Whiteley enjoyed the physical process of orchestrating pictorial balance and visual tension. Still Life with Banana carefully treads an optical tightrope. At their best, these paintings and drawings of studio still life, to quote the distinguished British curator and writer Bryan Robertson, exude ‘rare vulnerability, power and beauty …’4 The philosophy that every mood conjures its opposite is a fundamental premise of the work.