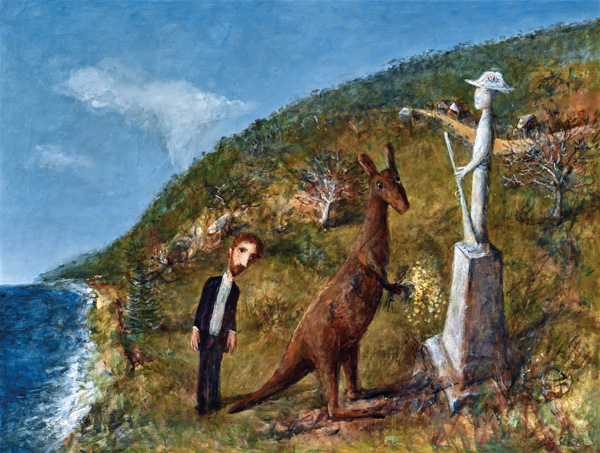 The painting Remembrance brings together three of Shead’s favourite pictorial motifs – the military memorial of the soldier on a pedestal reminiscent of Anzac memorials scattered throughout regional Australia; the anthropomorphic kangaroo, this time bringing a bunch of flowers to lay at the foot of the memorial; and a D.H. Lawrence figure, as an awkwardly clad European in an antipodean setting. The scene is arranged like a procession within a passage of scrubland somewhere on the central coast. The memorial figure occurred early in Shead’s work, for example in the large painting Thirroulia 1975, in the collection of the Wollongong City Gallery.1 The anthropomorphic kangaroo as a witness or voyeur was a recurring motif throughout the D.H. Lawrence series of the earlier 1990s, while as the bearer of floral tributes it appeared in the Royal Suite paintings of the late 1990s. The juxtaposition of these three motifs evokes a timeless vision tinged with nostalgia that could be described as bordering the uncanny – we are witnessing something that is distantly familiar to us, slightly mysterious but not completely foreign.

In Remembrance, the palette appears earthy and subdued on first encounter with the painting with ochres, browns, olive greens and touches of blue in the sea and sky and the dull whites of the monument the dominating colours. On closer examination, there is richness in the colour reflexes but, as frequently in Shead’s art, it is understated and waiting to be discovered. There is also a play between the black and white costume of the Lawrence-like figure with his rosy pink cheeks as he appears somewhat stiff and doll-like, and the towering memorial with its ashen white figure clutching the rifle, static and vertical. Between these two figures stands the giant kangaroo unconvincingly holding his floral bouquet. The beast, who is of this land, seems to intervene between the temporal visitor, who so obviously does not belong to this land, and the monument that refers to something that is beyond the temporal. The whole scene, or this little curious drama, is played out against a grand landscape vista, something that appears as eternal and beyond the human experience – it is the land of the kangaroo and closely relates to it in colour and surface textures.

Shead had on a number of occasions played with this pictorial idea, as for example in The Monument in the D.H. Lawrence series2 where the kangaroo has hopped on to the pedestal and Lawrence is joined by his beloved Frieda and stands before the monument. Remembrance is a more distilled, symbolic and universal statement about observing an old ritual whose original meaning may have been lost with time but whose outer form continues. There is a sense of majesty and solemnity in the occasion that is being remembered even though there is also a touch of absurdity.