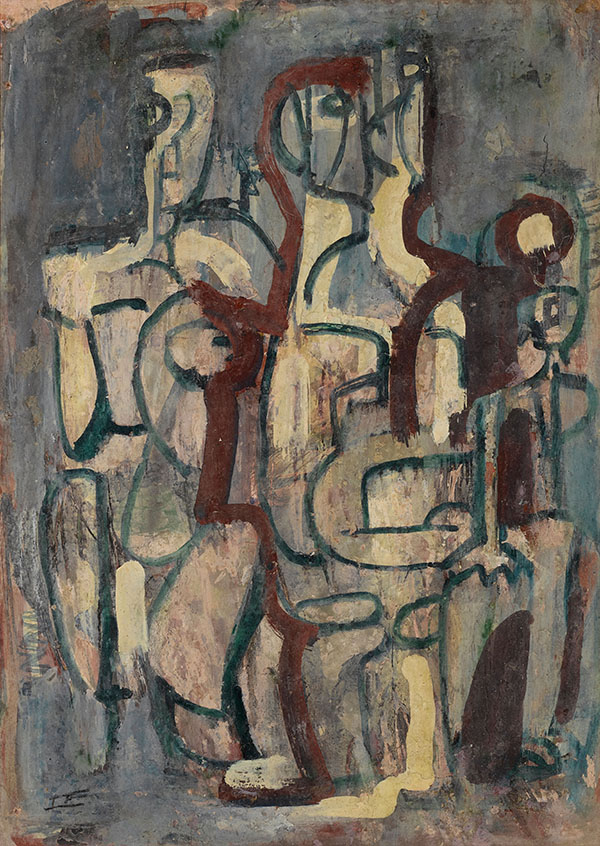 By in Blog
Lot:
Women and Children

Ian Fairweather’s 1957 Women and Children, a modernist rendering of one of his most familiar subjects, is a fine example of balance between the figurative and the abstract.

It was painted at a moment of relative calm in the artist’s fractured and far-from-calm life, five years after the low point of taking off from Darwin on a raft he’d made himself – a ‘collage of timber’ Murray Bail calls it – in an attempt to reach Portuguese Timor, or so he later said.1 Found washed up on a remote island after sixteen days at sea, he was ‘rescued’, handed to the British authorities in Indonesia and sent back to his natal England. There he had to work as a labourer to repay the cost of his repatriation before he managed to get back to Australia where he could find the solitude he needed to paint his way back to life – and his art. He went to live on Bribie Island where he made another ‘collage’, of driftwood and bush materials this time, to serve as a shack, where he lived modestly and alone, with his paints and his brushes. He was sixty-two when he landed there at the end of 1953. That new year he listened for the ‘first sound’, as he always did, he wrote to his friend J.S. Ede. ‘It has often had a message, a sign of things to come. This year there was a stillness. A blank.’2 It was in that stillness that he made the transition to the abstraction of his late, great work.

In his authoritative study of Fairweather, Murray Bail sees those years on Bribie Island as a time of consolidation as well as experiment, of integration as well as quest. Had he died on that raft, Bail writes, and it is miraculous that he did not, his legacy would have been as an interesting quirk in the history of Australian art, ‘a gifted foreigner’ rather than the magisterial artist – the most admired among fellow artists – who found in Australia a place where he could create ‘art without boundaries’.3

In Women and Children, painted at that time of quest, his retreat from perspective and gesture is complete; in place of an underlying pencilled composition, his drawing becomes painting, with confidence of line creating the blocky, fractured figures; his interest in cubism is evident, and his familiarity with Picasso – whose work he had seen only in reproduction. Painted in gouache, with a background of textured gunmetal grey over a light magenta wash, the figures are brought forward to fill the frame, the lines of dark green paint tethering the pale bodies of the mother as the round curve of children cling to her. The perfectly positioned vertical lines of dark ochre-rust slash through the composition, at once breaking and emphasising the instability of the maternal figure and the clinging limbs of the children. In it he achieved the balance he wanted, as he put it in a 1963 oral history interview, between ‘representation and the other thing, whatever it is.’4

Women and Children is also a highly subjective painting, the slashing, fracturing lines as much psychological as formal. Fairweather painted and repainted mother and child scenes many times throughout his painting life, a theme that for him held deep personal significance. While his painting and repainting of it can be seen as contributing to the modernist dismantling and remaking of a trope that has been fundamental to European art, for him it was also a lancing of a private, and primal trauma.

Ian Fairweather was the youngest of nine children born to a Scottish doctor, a ‘formidable’ Surgeon-General with the British army and a woman from a wealthy family from Jersey in the Channel Islands. Six weeks after his birth, his parents left him in the care of various aunts and returned to India where his father was stationed. The family was not united until his father retired ten years later. It was a precarious, fractured start to life which haunted Fairweather and his painting. In the quiet of Bribie Island, the experience still returned in memory and dream – and at the easel – but by then the reworking of painful experience had become reflective, more analytical than chaotic.

This 1957 Women and Children is indeed a fine painting that holds in balance not only the figurative and the abstract, line and colour, but also the meditative and the experimental, the subjective and the analytical. But it’s worth remembering that while all this might be so, Fairweather himself was opposed to the notion that any painting should need explanation. For him, its power lies in the visceral response it provokes.