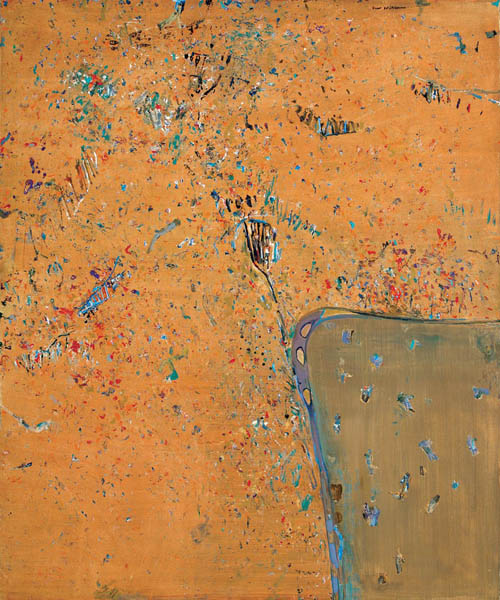 One of the most remarkable things about Williams’s paintings, such as his large and adroitly executed Werribee Gorge II of 1978, is that, despite seeming to be made up of various smudges, daubs and dabs of pigment, they convince the viewer that his non-naturalistic pictorial depictions capture the essence of certain aspects of the Australian landscape. If fact, so much so, that one learns to appreciate more the landscape through the art.

However, one does so only after being able to “read” the scattered marks of pigment in pictorial terms. It follows that one can only view an actual landscape and then call it “picturesque” after having seen it, or something like it, in a picture. The eye sees, but the mind translates. This is why one can call a landscape a “Williams” scene, or describe a view as “straight from a Williams painting”.

This is a marvellous and generally overlooked achievement that not only illustrates how Williams’s paintings have guided the Australian public’s perception of their own landscape, but also points to his remarkable power of pictorial suggestion. Of course, as the great art historian Sir Ernst Gombrich has noted ‘the painter’s skill in suggesting must be matched by the public’s skill in taking hints’. In other words, we learn to look – the eye is “educated” – what the great English poet W. H. Auden called adding “a precious seeing to the eye”. Perception learns to shake hands with cognition.

Ten years before Williams painted the present work, Werribee Gorge II of 1978, established artists in Victoria were aghast at the implications of what felt like a seismic movement in the cultural ground beneath them.

In 1968, the National Gallery of Victoria held its first exhibition at its brand new location in St. Kilda Road in what is now called Southbank. The highly impressive new gallery, designed by the leading architect Sir Roy Grounds (1905-1981), was opened by the Victorian Premier Sir Henry Bolte (1908-1990) on the evening of Tuesday 20 August 1968. Sir Norman Reid, the Director of London’s Tate Gallery from 1964 to 1979, opened the very heavily advertised inaugural exhibition on the following evening.
The exhibition was entitled The Field – it was a specially selected exhibition of seventy-four works by forty Australian artists, mounted to highlight the best of “contemporary” Australian art.

It is important to note that not one artist of Williams’s generation was considered for inclusion in this internationally flagged event. The rebuff sent a deep shudder through Melbourne’s art world. Everyone who was there clearly remembers the over-tinselled event and its silvered walls of iconised paintings, more abstract tableaux than recognisable images, in front of which people mouthed barely comprehensible litanies of faith in the then new ideas of formalism and “purity”. What was abundantly clear, however, was that a newly minted artistic coin was now in currency.

The changes were visible; the feelings were palpable. Painting in the supposed forefront in the late Sixties stressed surface flatness and disengagement from the world of naturalistic appearances and recognisable things. Most artists, including Williams, in the late 1960s to late 70s became much more fully engaged with the creation of works of art with simple and stripped down visual essentials while paying closer attention to the actual physical surface of the paintings. They adopted a non-recessional, non-illusionistic approach and saw contemporary painting as essentially being a flat picture plane, which did not pretend to present a view, “express” anything or offer up a mirror image of the world. For these artists the common opinion was that contemporary painting was in essence about form as a planar-based arrangement of shapes, patterns and colours – nothing more.

The general compositional trend towards a stripping away form of artistic minimalism was not lost upon Williams and there is no doubt that he was fully aware of its aesthetic significance. Certainly, Williams was highly visually aware of the implications of the NGV’s The Field exhibition. However, a move to greater pictorial simplification and abstraction was already evident in his own paintings, especially from the visual evidence presented by his justly famous You Yangs and Lysterfield series of 1965. This trend becomes quite evident in the highly accomplished oil painting Werribee Gorge Large Version of 1976-1977 in the collection of the National Gallery of Australia in Canberra. This large, over four and a half -metre painting, presents a horizontal expanse of what can barely be read as a conventional landscape. The background of this expanse is almost unmodulated in close tones and exists as a flat visual plane for the placement of variegated and almost calligraphic streaks and daubs of paint that, in various places, stand up from the surface of the canvas.

Looking at these paintings it becomes clear that Williams’s aesthetic direction had clearly moved away from the sophisticated techniques, colouristic effects, translucent ground and the late Cubist compositional structures of the magisterial Upwey series of 1965 and toward the pared down quality, semi-opaque grounds and optical sparseness of his Australian Landscapes series through to the late 70s.

Williams’s painting Werribee Gorge II of 1978, created during one of the worst droughts in the area in fifty years, is one of the finest paintings of the Werribee series. It is epic in its ambience and its visual scope - it shows a bird’s-eye study (impossible without an aerial photography or recalled aeroplane flight) of the vast and largely ignored rugged terrain that now forms part of Victoria’s Werribee Gorge State Park, near the Victorian town of Bacchus Marsh. Admittedly, the area’s arid clay pans and eroded plains together with the meandering banks of the Werribee River seem, at first, to present little pictorial interest.

However, Williams saw this dry and daunting prospect of a scene as an opportunity to work without the “distraction” of the usual scenery. What resulted was a horizon-less painting that accentuates the subtle modulations of a limited palette of colours. Its expanse of ochres, yellows, sienna browns are, here and there, contrasted with flecks of complementary colours – blues, greys, burnt orange tones and streaked patches of bone-white. The whole effect is a study in paint application – a calligraphic delicacy bound together with scattered painterly effects caused by sheer technical mastery and a variety of brushes and brushstrokes – such as the twist of paint, the dragged line, the use of thin over thick paint. The overall visual impact is almost seismographic in its vibrancy.

The development of these virtuoso characteristics and the use of these techniques may certainly be seen in his hallmark painting Werribee Gorge Large Version of 1976-1977 in the NGA in Canberra. However, it is instructive to consider
two very closely related paintings that show how the compositional grammar and high-key palette of Williams’s Werribee series gave rise to different expressions prompted by the same topography.

Williams’s Werribee Gorge I of 1977 shows an abstracted field of colour that in one view possesses a “zoom-in” focused detail as might be found on a fossilised rock and in another a “zoom-out” expanse that takes in an entire landscape. Each view highlights the Gorge’s Werribee River as a winding central motif that is, at alternate views, both a protozoa form and part of a snaking stream. Williams’s Werribee Gorge IV of the following year takes the “zoom-out” format much further and its subsequent forms play with the geographic promontory-like suggestions of its landscape masses.

Thus considered, what is clear is that Williams’s Werribee series created between 1975 and 1978 are based upon variations on a theme; as explorations of restricted palette harmonies caught within the simplifications of an environment that is almost devoid of visual “distraction” and complexity.

With all this in mind, the most elegant and restrained – the most visually “still”; the most pregnantly “silent” – of these minimalistic paintings is the present work: Williams’s Werribee Gorge II of 1978.