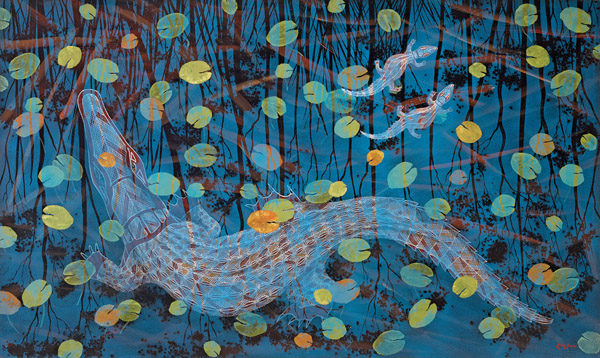 By Jane Raffan in Blog

Yorta Yorta artist Lin Onus has been described as a ‘provocateur who believed that there was no distinction between the political and the beautiful.’1 A self-declared ‘cultural mechanic’,2 Onus challenged cultural hegemonies utilising satire and humour in overt political installations and paintings, and by showcasing his Indigenous connection to country in his imagery of the natural world.

Executed in his peerless photo-realist style, Onus’s landscapes are exceptionally beautiful; their technical virtuosity and aesthetic power enthrals and transfixes. Mandiginingi stems from a sublime corpus of work wherein Onus contrived layers of imagery within, and upon, water bodies, elements of which are sometimes, at least initially, obscured by the reflected sky or reflected landscape, or both. These paintings are poetic and potent statements of Indigenous cultural authority, his ‘understanding of what lies beneath the surface of things.’3

With formal precision and showcasing his gift for composition, Onus keeps us floating around the watery picture plane, from bright green lily leaf to lily leaf. The sinuous form of the dominant crocodile, its tail in particular, resonates underwater, echoed by the habit of the aquatic plants moving in the current, which pulls the viewer deeper into the painting’s depths. Bringing us back to the surface, the baby crocs float at one of the painting’s brightest spots. It is here that the strong verticals of the reflected trees come into sharp focus; and with this cue the viewer embarks on a whole new journey.

This pattern of engagement, invoking concentration through circular movement, is an effective device in hypnosis; more commonly experienced as hypnogogic consciousness, the state of transition from wakefulness to sleep. This dreamlike visual effect is pervasive in Onus’s watery reflections,4 where it operates to draw the viewer in—entrancing them—but also to make transparency illusory:

… things are not always what they seem. Laden with cross-cultural references, visual deceits, totemic relationships and a sense of displacement, they, amongst other things, challenge one's viewing position: Are you looking up through water towards the sky, down into a waterhole from above, across the surface only or all three positions simultaneously? 5

Unique among urban-based Indigenous artists’ oeuvres, Onus’s hypnogogic watery imagery comes close to evoking the realm of the Everywhen in the same way as does the spiritually laden optical effects in men’s desert painting, or the shimmer produced by bark painters from the Top End. These diverse pictorial properties affect the physical self with a sensation that functions as an allusion to the spiritual realm and its ‘eternal becoming … the totality of Indigenous knowledge and its future potential, made alive through both its immediate and continuing transmission … the Dreaming pushes ancestral memory into the present.’6

Onus made sixteen ‘spiritual pilgrimages’ to Arnhem Land, including many trips to Gurruwiling (Arafura Swamp) over ten years until his death in 1996; experiences that animated his mixed race/mixed cultural ‘in-between space’ and expand his repertoire to accommodate both Indigenous and non-Indigenous ways of seeing and being.7 His subject matter, replete with intermingled pictorial layers of elements drawn from nature, commonly features animals decorated in rarrk, the cross-hatching designs he was granted permission to use from acclaimed artist Djiwul ‘Jack’ Wunuwun (1930-1991), who adopted him into his Murrungun-Djinang clan in the late 1980s.

Onus’s Yolngu kinship initiation in Arnhem Land enriched his physical self and his spiritual world view: ‘…you know who you are related to … you discover more about the other things you are related to. Because you have Dhuwa skin, you get to know all the Dhuwa creatures … they are part of me and I’m part of them now.’8 Referencing his hybrid landscapes, Margo Neale writes that ‘the presence of indigenised frogs, lizards and geckos … also refers to totemic landscapes and is part of a process of claiming custodianship of the land or expressing a sense of belonging.’9

On the surface, Mandiginingi presents as a serene macro-landscape tableau, most likely a billabong in Gurruwiling (Arafura Swamp); the major totem for Gurruwiling is the crocodile. Onus’s clan-decorated crocodile appears to be floating just below the surface, parts of its body highlighted in plays of light. Deploying his usual humorous irony, Onus depicts the crocodile with one eye glinting above water, warily fixed on the viewer. The dream-like scene has been punctuated; the intruder has been checked, the power of their gaze subverted, their sense of privilege challenged.

This was one of Onus’s special gifts; his clever use of pictorial subtleties enabled him to change the narrative and challenge preconceptions. In this case, Onus’s watchful crocodile is sending a clear message about cultural authority. Perhaps the caught-out viewer might reflect on the ‘gotcha’ experience and come to better understand Onus’s ‘sense of displacement, dispossession, inequity and disorientation that has been the experience and history of Australia’s Indigenous people since colonisation.’10

Onus’s personal experiences provided fertile iconographic ground, within which Neale sees his use of rarrk as a process for indigenising the other, as well as a tool for subverting the primacy of western systems of representation.11 In this way, Onus can be seen as interjecting in the pantheon of epic historical Australian landscapes painted by white men and influencing the writing of a new narrative, a process elsewhere described as responding to the landscape as ‘a cultural archive.’12

Characterising this new narrative within and beyond the discourse and post-colonial imperative of decolonisation, Onus’s emphasis on reflection and water surface in his mature resolved work has been recently defined as ‘a call for deep consideration of one’s experience of life, or more specifically, to make connections between oneself and the world.’13 Just as his journeying to Maningrida in Arnhem Land and his relationship with Wunuwun bridging a cultural divide was a healing one, Onus wanted the same for his legacy: ‘I kind of hope that history may see me as some sort of bridge between cultures …'14

Lin Onus’s art requires Australians to think about ourselves and the country we inhabit, and in so-doing Onus became one of Australia’s acclaimed contemporary artists of renown, with his talent and importance broadly recognised: through awards such as ‘Best Work in Introduced Media’ category at the Fifth National Aboriginal Art Award in 1988, and the Kate Challis RAKA (Ruth Adeney Koori Award), Melbourne, 1993; in the same year he was bestowed a member of the Order of Australia on the Queen's Birthday Honours List. He was overall winner of the National Indigenous Heritage Art Award, Canberra, 1994, as well as the People's Choice Award.

Onus’s important messages about valuing Indigenous peoples, their knowledge systems and culture, and respecting our natural world have reached across divides. His declaration that there is ‘no distinction between the political and the beautiful’ is made manifestly clear in his watery landscapes, where aesthetics captivate and ethical matters become apparent.15 As one of the country’s most sought-after artists, and whose work has strong international appeal, Lin Onus’s artistic legacy is already much greater than his modest hopes.

6. The term ‘everywhen’ was coined by Australian anthropologist William Stanner in 1953: “One cannot ‘fix’ the Dreaming in time; it was, and is, everywhen.” Curator Stephen Gilchrist utilised this concept in his exhibition Everywhen: the Eternal Present in Indigenous Art from Australia, Harvard Art Museums, February-September 2016, Yale University Press, Connecticut, p. 19.