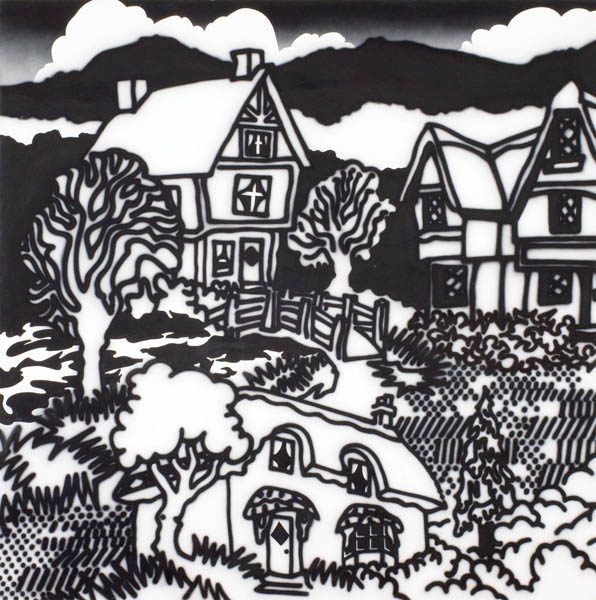 This painting was first shown in 5AR: Artists and Architects, a collaborative group exhibition curated by Val Austin, at the University of Melbourne’s George Paton Gallery in June 1986. The stark monochrome palette references its origins in Elizabethan half-timbered architecture, and also points to the dark side of the suburban imagery Arkley was beginning to explore more intensively at the time.

The artist’s studio collection of sources and photographs includes material related to this theme, assembled over the years. But he became particularly intrigued with it following a disorienting late-night visit to the Fitzroy Gardens site, in preparation for his collaboration with architect Howard Raggatt, who suggested the quaint collection of 1:20 scale Tudor houses as a starting point, after seeing it with his family.

I went to see the thing in a taxi at three in the morning… It was very windy, and I became aware that there were people in the bushes. It was very gothic. So I tore out of there… and when I got out I realised that was how the painting should be -black and white, with dramatic lighting.

This idiosyncratic reaction seemingly put him at cross-purposes with Raggatt, who later abandoned all direct reference to the village in his contribution, leaving the “collaboration” abstract, and reviewers bemused. For Arkley, though, the theme assumed considerable significance, leading to a second brightly coloured canvas, Tudor Village, also shown at the 5AR exhibition, and several subsequent variants.

The Tudor village itself, a gift from England in 1948 (in appreciation of food parcels sent from Melbourne to London during The Blitz), was initially well received, and became a favourite with local children. Later, though, it came to be derided as kitsch; a 1984 report to the Melbourne City Council concluding: ‘This battered piece of garden gnomery serves no useful or decorative purpose.’ Nevertheless, it was fully restored and reopened for its sixtieth anniversary in 2008.

“Mock Tudor,” as it was termed disparagingly by modern architectural critics, was an ornamental option in vogue in earlier twentieth-century Melbourne, following overseas trends. “Stockbroker’s Tudor” was one of the decorative sins catalogued by British humourist Osbert Lancaster (1908-86), in his Pillar to Post: the Pocket Lamp of Architecture (1938), satirising the contemporary spec building styles he termed “By-Pass Variegated.” In Australia’s Home (1952) and The Australian Ugliness (1960), Melbourne modernist architect and critic Robin Boyd lampooned “Tudoresque” housing and the fake Elizabethan décor of the shops still prominent today in Toorak Village. But Postmodernism rekindled a taste for such examples of kitsch and faux décor, and Arkley’s work is indicative of that tendency.

Arkley’s response to the Fitzroy Gardens site as “gothic,” quoted earlier, is particularly interesting in relation to his art, and also prescient, foreshadowing the recent emergence of a “New Gothic” genre in general (exemplified locally by David Noonan and others). It also helps identify more complex currents often underestimated in his own work. In the catalogue of the 1991 Monash University survey exhibition HA: Howard Arkley, his friend and colleague Tony Clark developed a fascinating series of insights into Arkley as a contemporary Goth, subverting the classical through his choices of both style and content.

The Tudor subject also relates clearly to the “unhomely” dimension of his suburban theme, addressed in the opening chapter of my Carnival in Suburbia (2006). The other 1986 canvas, Tudor Village, re-appeared in the artist’s solo show at Tolarno Galleries in September 1986, lurking in one corner of the gallery as both playful comment and destabilising aside on the predominantly urban and suburban imagery of the exhibition. It also brought into focus a looming, sinister aspect to some of the suburban houses in the Tolarno show, particularly Nubrick and Our Home.

Formally, the Tudor motif, with its strong linear emphasis, is akin to other historical techniques and genres that struck a chord with Arkley, including stained glass, manuscript illumination, woodcuts and comics. The same applies to colouring books, a direct source for both 1986 Tudor canvases.

The artist returned to the subject several times after 1986, oscillating between vivid colouring-book imagery (e.g. Tudor House, private collection, 1987), and monochrome variants, such as Tudor Village, a work on paper shown in the 1995 White + Black exhibition at Tolarno, and now in the collection of the National Gallery of Australia, Canberra. His 1988 Casual Works show included another work on paper version, exhibited with examples of source material (now in the Arkley Archive, State Library of Victoria).

A note on references