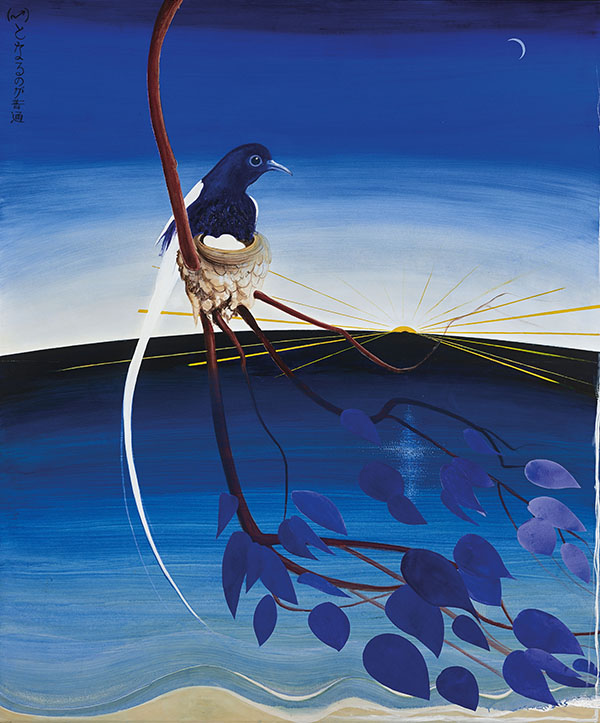 Brett Whiteley may be thought of as Australia’s Rudolf Nureyev (1939-1993, Russian) of the canvas – the two were born one year apart and died one year apart. The bravura, flair, airy grace and breath-taking suspension of the ballet dancer were, for many, mirrored by the young Whiteley in the seemingly dashed-off, almost brazen insouciance of his paintings.

Analogies aside, it is easy now to forget just how astonishing Whiteley really was. Who could forget the audacity of this stripe-trousered, tousle-haired wunderkind in the Sixties? Has any twenty-year old artist ever appeared on the front page of The Australian newspaper ever since?

Whiteley’s artistic trajectory was astounding. In November 1959, at the age of twenty, he won the Italian Government Travelling Art Scholarship, which was judged by Russell Drysdale (1912-1981). Whiteley held his first solo exhibition at the age of twenty-three at the Matthiesen Gallery in London in 1962. In this context, it is worth noting that Whiteley is the youngest non–British artist to have a work purchased by London’s prestigious Tate Gallery. His painting, Untitled Red Painting of 1960, was purchased for the Tate Gallery from Bryan Robertson’s famous Whitechapel Gallery in London during the groundbreaking group exhibition Recent Australian Painting of June to July of 1961 - Whiteley was just twenty-one years old when he painted the work.  After early success, Whiteley’s life was firmly set on an artistic path and he more than proved himself through forty-nine successful solo exhibitions held between 1962 and 1992 – a highly productive average of three exhibitions every two years.

Whiteley first came to notice the captivating beauty of birds in July 1969 during a blissful five-month stay in a small cottage in the village of Navutulevu, about eighty kilometres from Suva in Fiji. The couple, with their five-year-old daughter Arkie, lived simply and happily and enjoyed their island paradise after the turmoil and bustle of New York. Wendy Whiteley summed the period up well: ‘We really did live in Paradise there. Brett was painting birds, landscapes, frangipanis, some of the Fijians. It was Gauguin and Tahiti: you could sink into it.’1 It was a stay that was abruptly cut short by a much-publicised early morning drug raid by the local police. Whiteley was fined £50 for drug possession and forced to return to Sydney. Despite this unwelcome end to his holiday, the elegant form and rich colour of bird life were to stay in his mind for the next twenty years.

Whiteley’s large and impressive painting, The Sunrise - Japanese: ‘Good Morning!’ of 1988 was inspired by the earlier peace and repose of his stay in Fiji. This was at a time when the Crafts Board and the Visual Arts Board of the Australia Council promoted new links with Asia by supporting Australian potters, printmakers, sculptors and painters to visit Japan and acquaint themselves with the art of the East. As a result, Japanese aesthetics and the Japanese Arts and Crafts Movement became prominent in Australia - this is remarkable as, in contrast with today, Australia knew little of Japan and it is worth recalling that, at the time, there was only one Japanese restaurant in Melbourne - the famous Sukiyaki Inn off Little Bourke Street at the back of the Southern Cross building. Books on Japan were very rare and suddenly, in the mid 1970s, international publishers such as Kodansha, Tuttle and Hokkeido Press made scholarly works available through local subsidiaries. The only place one could feast upon Japanese art proper was at the National Gallery of Australia, Canberra, and the collection of Japanese prints shown by Tate Adams in his marvellous little gallery in Melbourne’s Crossley Street.

In Whiteley’s mind, the appeal of the Orient was always associated with peace, respite, refuge and gentility and there is little doubt that he returned to the theme at times of tranquillity in his Lavender Bay studio in Sydney. Therefore, it comes as little surprise that after his separation from his wife Wendy, he should return to the bird series as he has done in The Sunrise - Japanese: ‘Good Morning!’, a painting that was not only a release from the stress of that time, but also a response to his five-week trip to Bali, Kyoto and Tokyo. The painting was exhibited in Whiteley’s 1988 solo Birds exhibition (cat.16) at his studio in Sydney’s Surry Hills and was purchased from the artist in the same year. The Sunrise - Japanese: ‘Good Morning!’ is a refinement of both an earlier and a contemporaneous work; that is Orange Fijian Fruit Dove of 1988 and his Shao (Rain Slanted by Wind) of 1978-79. It has Whiteley’s characteristic sweep, his use of lush blues and the subtle balance of Oriental screen paintings that unfold their beauty like unfurled scrolls.

There is something of an Oriental feeling in many of Whiteley’s paintings of birds.  It seems most likely that he noticed the lyrical charm of Chinese and Japanese paintings and screens. Whiteley was an observational magpie - he had an acute ‘eye’ in that he so often noticed that which would go unnoticed by others. Chinese vases, Japanese prints, screens, calligraphy, kimono fabrics, bas-reliefs on bronzes - all these varied elements widened his visual ‘vocabulary’ and honed his visual literacy.

However, it is important to note that Whiteley’s bird series are not ‘interpretations’ or copies of any Oriental themes – he does not ‘Orientalise’. Whiteley’s imagination wandered the Pacific Rim region and he somehow ‘Australianised’ whatever stirred his artistic imagination. It is hard to imagine anyone but an Australian artist painting these sorts of works. For a long time, as Paul Gauguin (1848-1903, French) well knew, Sydney was considered to be the centre of the Pacific, so it is entirely appropriate that one of Sydney’s most accomplished sons should turn his attention in that direction.

Giles Auty, the English commentator who was the art critic for the Australian newspaper from 1995 to 2001, clearly recognised all of this when he wrote the following:

While Matisse looked to sources such as Persian miniatures for certain of his formal devices, Whiteley turned more appropriately to the Pacific and Japan. This is another aspect of his art that seems to irritate his detractors, yet he followed a major tradition in art in doing so.2

Whiteley emulated, not imitated. He personalised an Oriental mode of sensing and seeing that heightened sensation and appreciation – these are not angst filled canvasses, they simply ask us to pause and reflect on the beauties of the natural world around us. These underlying, even hidden, factors are an important part of the lingering appeal of Whiteley’s bird series of paintings. The respected Melbourne art critic Alan McCulloch got it right when he said:

As observer and delineator of the waning kingdoms of animal and bird life, Whiteley is a remarkable artist, perhaps, because in these relatively uncontaminated domains he is motivated more by love than despair.3

Robert Gray, the Sydney poet, recognised the exceptional quality of Whiteley’s bird series of paintings and published these words in the journal Art and Australia:

In Whiteley’s bird paintings is embodied his finest feeling; they are to me his best work. I like in the bird shapes that clarity; that classical, haptic shapeliness; that calm - those clear, perfect lines of a Chinese vase. The breasts of his birds swell with the most attractive emotion in his work. It is bold, vulnerable and tender.4

Given the nature of the man, it is probably best to let Whiteley have the last word. The sophisticated Austraphile Sandra McGrath, author of the earliest monograph on Whiteley, once asked him if he thought he was a genius. Sounding as droll as Dalí (1904-1989, Spanish), he replied: ‘Seven times in my life I have felt that maybe I am in possession of genius. These pass’. 5 They may well pass, but the work lives on.