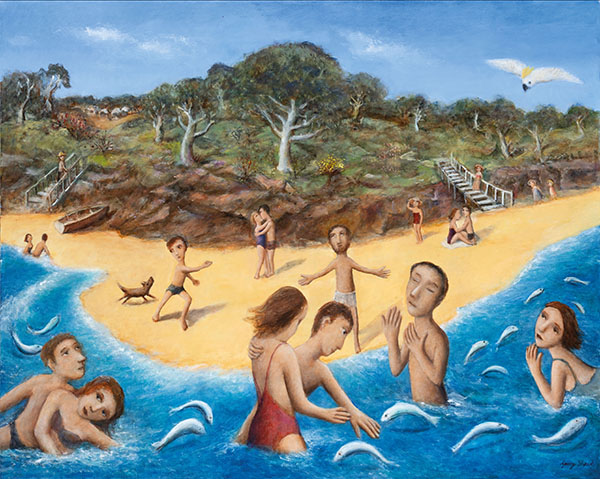 Garry Shead brings the divine into our Antipodean everyday. Shead translates religious and cultural legends from the Renaissance onwards into an Australian idiom, breathing new life into old ideas. He paints himself into these compositions, either as a bystander or as the protagonist, exploring the burdens or joys of figures such as D.H. Lawrence, Rembrandt van Rijn (1606-1669), the fictional Australian poet Ern Malley and even, sometimes, Jesus Christ himself.1

In the late 1990s and early 2000s, Shead painted a series of monumental religious paintings that took as their subject central Bible stories from the New Testament, relocating the action to the coastal town of Bundeena, south of Sydney. These glorious light-filled paintings celebrate amongst other things the annunciation of Mary, in The Annunciation 2000, and the baptism of Christ in The Baptism of Christ at Bundeena 1999. The series are closely related: all are set on the beach at Bundeena, several including a sulphur-crested cockatoo representing the Holy Spirit, and feature a cast of figures signifying universality, some enraptured, some in loving couples. The present work The Miracle 2000, happily riffs on the parable of the ‘feeding of the multitude’ wherein Jesus fed 5,000 followers by multiplying two loaves of bread and five fish; and a later miracle, that of St Anthony of Padua preaching to the fishes.

There is a beguiling simplicity to the present work that belies its technical brilliance and depth of feeling. Trading on the tradition of Baroque religious paintings intending to instruct, delight and move the faithful, and displaying his significant painterly skill as a colourist, Shead deploys the Renaissance triangular compositional device to centre the action. The figures in the forefront of the canvas bear witness to the Jesus persona, standing in crucifix form along the painting’s axis, eyes raised to the heavens. Silvery fish leap joyously about them. These people are graceful in their surrender to the experience. The faces of the women are beatific, recalling traditional images of Mary, mother of God. One man seems enraptured; eyes closed, hands raised tentatively; another seeming to reach out to touch a fish in wonder, to make certain of its reality. Shead is here too, in the bottom left of the canvas, embracing his Muse and watching carefully what is unfolding. The cast of characters in the background seem unaware of the miracle in their midst, and that is fine too, because simply being there, enjoying the day on the beach is enough. Sharing the cooling ocean, warm sand, and hot sun.

Religious paintings are ubiquitous, attempted by so many artists because religious themes are universal. What is religion if not an attempt to explain the chaos of our existence through the telling of stories? Setting The Miracle in a recognisably Australian coastal setting brings home this parable about sharing what little we have, even if all we have is just the day itself: Shead reminds us that the divine has always existed in our everyday.