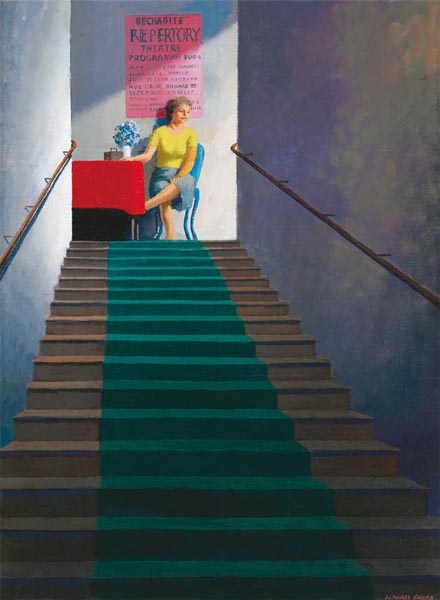 Jeffrey Smart loved to paint stairs, they feature in many of his pictures. We can only guess why, but perhaps it was their patterned order and their elevation or sense of spatial progression.

After all, these compositional factors play a consistent role and strengthen the underlying structures of all his well-known paintings of urban road markings, bridges, traffic signs, hoardings, billboards, plazas and freeways. The chosen shapes, shadows and patterns of these pictorial elements visually “bind” the compositions of his paintings. All of Smart’s paintings rest upon very careful and meticulous planning that goes through considerable deliberation - a process of visual refinement - until they possess what Smart called “visual weight”. That is, they had to “mesh” into something more and amount to something that moved beyond the mere recording of observations – they also had to entice and intrigue.

Once this is appreciated, Smart’s painting Study for Repertory Theatre Entrance 2005 reveals itself as the rare gem that it truly is.

It’s all there: one looks deep into the painting’s funnelled shapes because it is “made” to do it. A flight of stairs enlivened by a green carpet, graded out like a paint store’s colour chart, leads the viewers’ eyes upward between two walls, one of which moves up toward the light, while the other moves attention downwards. The resultant play of optical interest is further enhanced by two handrails that channel the sight and focus upon an upper section, lit with angular light, that shows a seated female figure, a cabriole chair, a cash box, a white vase of hydrangeas and a table covered with a red cloth. These elements are placed in front of a candy pink poster of the Shakespeare plays performed by the repertory theatre of the painting’s title – curiously, Jeffrey Smart has wittily included himself as one of the players.

Looked at as a whole, these varied elements are contained within shapes that control the way that the viewer is “led” into the picture plane. In its essentials, what one sees is an upper rectangle flanked by two trapezoidal shapes with a central lower trapezoid whose ribbed lines zoom-in upon its principal subject matter. It is as though Smart has concentrated the viewer’s gaze upon the upper central rectangular area that contains the seated figure in order to better appreciate its balanced finesse and its picture within a picture format. Significantly, the rectangular shape has the dimensions of the Golden Rectangle (1:1.6 – the proportions of the common credit-card) – Smart’s much-used favourite.

Looked at in these ways, Smart’s Study for Repertory Theatre Entrance elevates ordinary and generally unnoticed aspects of everyday life into a composition that “lifts” the mundane in ways that were once, in Medieval and Renaissance times, reserved for religious figures and Royalty. It takes a humble spirit, a generosity of mind and an original eye to carry this off in such an understated manner.

Considered in all these ways, Smart’s Study for Repertory Theatre Entrance is typical of two of his artistic gifts: it makes one notice the unnoticed and it elevates the ordinary. Not only that, Smart’s carefully considered compositional structure beams out a quiet gravity, it conveys “visual weight” and, importantly, it is created with the distanced gaze of a very empathetic observer.