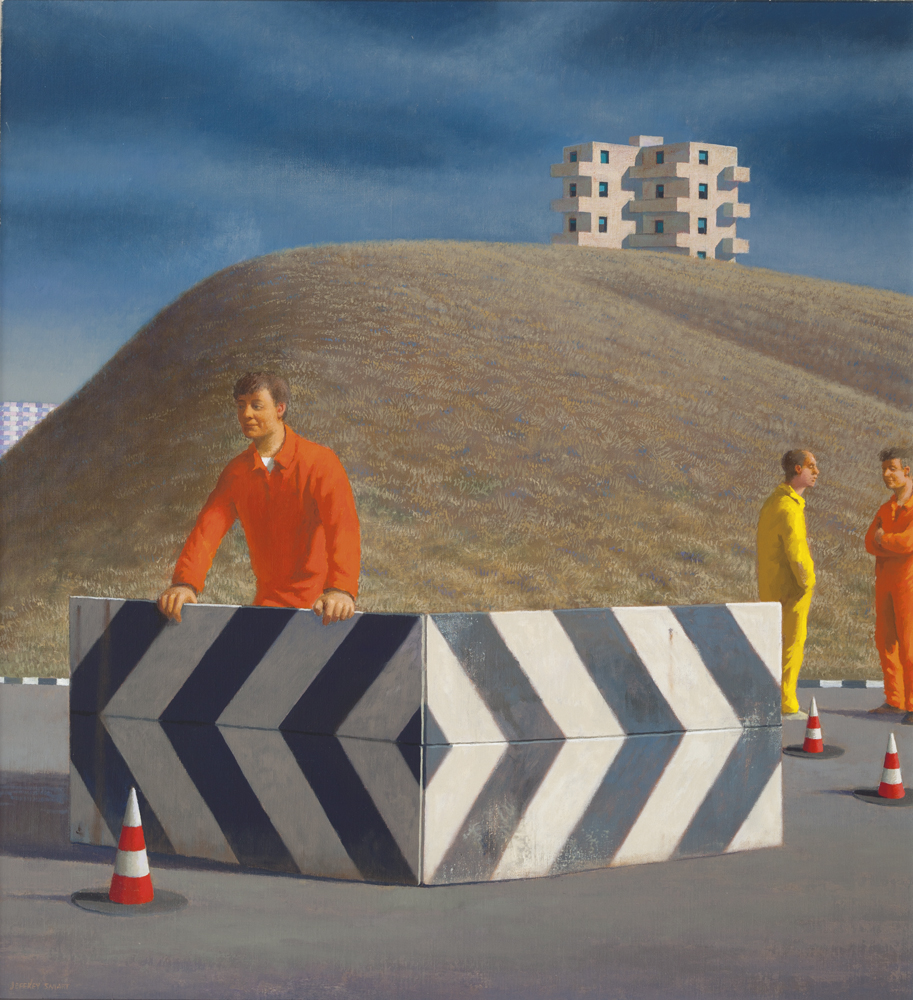 Jeffrey Smart was an extremely well-travelled artist. His many road trips as a passenger (he did not drive) provided him with the opportunity to scan urban and suburban landscapes looking for strange juxtapositions, unusual events and odd placements. Such metropolitan vignettes were collected by Smart’s artistic mind and carefully arranged into compositions in his studio/home Posticcia Nuovo near Arezzo in Italy’s Tuscany region. His compositions were always consciously arranged and then constantly rearranged until they achieve the balanced pictorial structure and ‘open-ended’ ambience that characterise all his major paintings, such as Near Pisa of 1995.
Jeffery Smart was only eighteen years of age when his talent was fully recognised. In 1939, Smart was invited to participate in Adelaide’s first exhibition of modern art. The group exhibition, organised by Mary P. Harris (1891-1978), was called ‘The Testament of Beauty’ and included the works of much older artists such as David Dallwitz (1914-2003), Ivor Francis (1906-1993), Jacqueline Hick (1919-2004) and Douglas Roberts (1919-1976), amongst others.

Five years later, in 1944, Smart held his first solo exhibition at Kozminsky’s, the famous Melbourne institution. Robert Menzies, later to become Australia’s longest serving Prime Minister, opened the exhibition; Clive Turnbull, the insightful art critic for Melbourne’s Herald newspaper, wrote a favourable review. Smart’s direction was set. Subsequently, he travelled to Paris in 1950 and studied at the Grande Chaumière School, one of the best art schools in Europe – artists such as Alexander Calder (1988-1976), Alberto Giacometti (1901-1966), Amedeo Modigliani (1884-1920) and Isamu Noguchi (1904-1988) passed through its doors. He also attended the Académie Montmatre where for a time he worked under the famous French artist Fernand Léger (1881-1955), whose highly accomplished painting China Town of 1943, was successfully auctioned by Menzies in June 2015.

Smart’s work is represented in every State Gallery in Australia as well the National Gallery of Australia and numerous national and international private and University collections. Furthermore, Smart held forty solo exhibitions, participated in fifty-five group exhibitions, been represented in sixty survey exhibitions, written twelve publications and is cited in over 350 books, journals, newspapers, interviews and films, both nationally and internationally. Such was his artistic standing that, in 1999, the Art Gallery of New South Wales mounted a large and highly successful retrospective of Smart’s paintings, which travelled to the Art Gallery of South Australia, the Queensland Art Gallery and the Museum of Modern Art at Heide.

It is worth noting that all of Smart’s paintings are of the real and observed world – they arise from lived experience and acute perception. Smart did not invent them, dream them or dredge them up from his unconscious. This is, in part, why one is drawn to them; these images exist in a familiar world. We all have seen such scenes and glimpsed such vignettes, but do little or nothing with them. By contrast, Smart noticed them with the eye of an artist and re-presented them in ways that highlight their integral mystery and visual power – always, the ordinary is transformed in the extraordinary.

Most good artists have highly developed and sophisticated visual literacy and Smart’s language of artistic form is instructed by a simple and abiding aim. As he put it: ‘I find myself moved by man in his new violent environment. I want to paint this explicitly and beautifully’.1 By ‘violent’, Smart here means urban and metropolitan environments that are far from the peaceful and unperturbed comforts of small villages, farms, vineyards and pastoral locations. Just such poetic sentiments underlie the pensive sensations found in Smart’s paintings. They invariably portray scenes where technology and ‘progress’ dominate and threaten to overcome human beings – so often in Smart’s paintings people sit, stand, walk and work in strangely alienating and dehumanising locations.

Like most serious artists Smart was understandably reluctant to discuss or explain his paintings however in 1968, writing for the prestigious Swiss journal Art International, he gave a rare glimpse into the enigmatic and varied content of the personal world of his metaphysical and aesthetic ruminations:

Some styles have become outmoded for the artist’s message. (If he has a message). But how would Bonnard paint a Hilton Hotel bathroom? How wrong a jet-plane or a modern car looks painted impressionistically! A man is logical in horseback; but in a satellite, surreal. Only very recently have artists again started to comment on their real surroundings. New art movements emerge ever faster. Now for the first time since 1874 (First Impressionist Exhibition) a painter may employ any style, and not be labelled reactionary. We accept changes and miraculous discoveries without wonder – as Vermeer handled a white jug; but man has changed little in thousands of years in his need for art, even for mysticism. He still strives for the same ends, in different ways. Security? The Bomb? How much more insecure Fra Angelico must have felt riding to Orvieto with the threat of outlaws, robbers and the plague.2
Many of Smart’s scenes are seen as though perceived through a car window. Smart paintings are depend upon wandering and travel; one views these exterior scenes as though hermetically sealed from them – yet, Smart’s artistic vision was never cold or sardonic; by contrast, he was always dispassionate yet gentle in his observations.

Smart employed what might be called an observational aesthetic. As a consequence, Smart’s briefly perceived glimpses invest his paintings with a temporary ambience as though the painted scene is captured in the blink of an eye while being isolated and removed from it. These qualities have led some commentators to discern a filmic quality in Smart’s paintings and to see parallels in the films of the Italian Post-War films of Michelangelo Antonioni (1912-2007) and Federico Fellini (1920-1993), where beauty is also sought within the constructed confines of metropolitan realities. Furthermore, the early films of the German director Wim Wenders (born 1945) present many scenes through a car’s front window to focus and frame viewers’ attention and to experience the film scenes subjectively, that is, like the film’s subjects.

In Smart’s paintings there is that same sense of seeing the world through the artist’s eyes. Smart was not simply an impassive observer of urban realities; he was an active and avid collector and a manipulator of carefully selected visual details that channel one’s vision and construct pictorial meaning. All of them, Antonioni, Fellini, Wenders, would have recognised Smart’s aesthetic aims and been able to distinguish the hidden poetry behind his urban-based visuality.3 Smart puts these aesthetic aims both cryptically and incisively in the following faltering words:

Sometimes I’ll drive around for months. Despair: nothing, nothing. Then suddenly I will see something that seizes me. A shape, a combination of shapes, a play of light or shadows, and I send up a prayer because I now have the germ of a picture. I have to stop and record that inspirational flash immediately, or I might lose it. I make rapid sketches, take photographs, note the time of day in case I want to return. …To recrystallise a moment of ecstasy: ecstasy or a moment or a feeling about something. Sometimes the feeling is not so much visual. Sometimes it’s a feeling about a certain place or area of Rome or Florence, or the country where there’s a garage. There a feeling there that I like. (author’s italics) 4

Smart’s accomplished Near Pisa of 1995 is a mature aesthetic reflection on a theme that he revisited at various points in his life. The painting presents his signature pictorial ‘silence’ where figures are placed in compositions that seem unhurried in atmosphere as well as eerie in ambience. In Smart’s Near Pisa, the pictorial setting is made up of a roadside scene with three workers in yellow and red overalls. There is a ‘separateness’ about the figures as though they exist in their own worlds and the painting does not hint at any deeper connection between them. This gives the artistic composition an unsettling disjuncture that suits its dehumanised setting. For instance, the present painting’s almost square format frames a scene that is treeless and bland with blocks of apartments that are at the extreme end of Italy’s image as a touristic haven. As well, the road signs reflect Smart’s constant interest in geometry and visual balance and seem to concentrate the viewer’s attention and magnify the effects of the commonplace.

Smart has managed to combine an inspired personal landscape of mental associations with the thoughts of the inner self in ways that give his painting its poetic content and characteristically bracing psychological tension.
The present painting condenses much as Smart’s vignettes are both confronting in their vivid realism and comforting in their recognition of familiar urban realities. In making the familiar so unfamiliar Smart reminds one of the potential erosion of humanist values. We all sigh when we recognise the ubiquitous commonness of Smart’s urban realities and thus are brought to share in his ironic vision of urban compromises. It is the mysterious blending of such complex, even conflicting, sensations that make Smart’s paintings so unique and memorable.

No other artist in Australia has captured such evocative content so precisely and opened one’s eyes to the taken for granted harshness of the incongruities of industrialisation and municipal development.