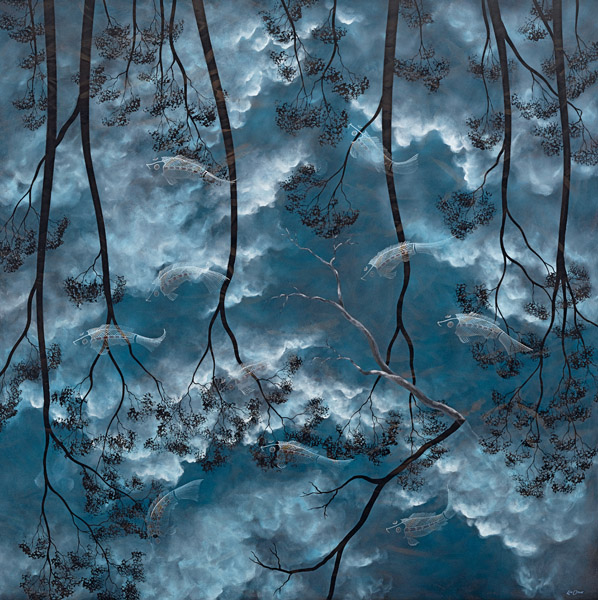 Yorta Yorta artist Lin Onus has been described as ‘a cultural provocateur who believed that there was no distinction between the political and the beautiful.’1

Philosophical thinking offers a useful key to unlock this statement. Australian academic Robin Ferrell has proposed a paradigm for considering Aboriginal art’s political power, something she termed as ‘aesthetics preceding ethics’. In this paradigm, Ferrell ponders ‘the power of images to make a political reality increasingly visible.’2 While she was specifically referencing desert painting in her essay, the same consideration can be made of Onus’ oeuvre.

Onus’ paintings are exceptionally beautiful; their technical brilliance and aesthetic power enthrals and transfixes. He challenged cultural hegemonies through his art by utilising satire and humour in overt political installations and paintings, and by showcasing his Indigenous connection to country in his landscape paintings and imagery of the natural world. The later paintings in particular, the present work among them, are poetic and potent statements of cultural authority – ‘his Indigenous understanding of what lies beneath the surface of things.’3

Executed in his peerless photo-realist style, they are replete with intermingled pictorial layers of elements drawn from nature, and with animals decorated in rarrk, the cross-hatching designs he was granted permission to use from artist Djiwul ‘Jack’ Wunuwun (1930-1991), who adopted him into his Murrungun-Djinang clan in the 1980s. Wunuwun was the first Murrungun painter to depict the transparency of a fish-trap in bark painting with Barnumbirr the Morning Star, 1987 (National Gallery of Australia). Significantly, in this important work the fish trap represents the transition from life to death, symbolising a catcher of souls.4

Fish and Storm Clouds (Guyi Na Ngawalngawal) is one of Onus’ most ethereal works: an upside-down landscape in the sky … clouds reflected in still water … fish swimming through the heavens. With technical precision and a gift for composition, Onus keeps us floating around the picture plane, following the subtle stippled forms of the reflected treetops as they echo the delicate cloud ruffles. Drawn into the painting’s depths by the ghostly fish and barely visible underwater vegetation, at last we fix on the protruding branch that sits at the painting’s centre, surrounded by halo of clouds with luminous edges.

These clouds are reminiscent of depictions of the heavens in Renaissance painting, and later, the God-given natural landscapes of certain Romanticists. Onus was self-taught in the western art tradition and would likely have been aware of the significance of this iconography.

Fish and Storm Clouds (Guyi Na Ngawalngawal) depicts Onus’ ancestral spiritual locus, the Barmah Forest, the largest red river gum forest in the world, whose ecology is closely linked to the Murray River waterflows. The political power of this work’s aesthetic beauty is subtle, or as Margot Neale sees it, deceptively straightforward: '… things are not always what they seem. Laden with cross-cultural references, visual deceits, totemic relationships and a sense of displacement, they, amongst other things, challenge one's viewing position: Are you looking up through water towards the sky, down into a waterhole from above, across the surface only or all three positions simultaneously?'5

Of course, one’s ‘viewing position’ is also a statement about hegemony and our own cultural assumptions. Is something about to break through the clouds? Is it reflecting a moment of revelation for the viewer, or an annunciation? Are we looking at ‘our’ heavens, an idealised (and threatened) landscape, or a scene laden with unseeable Indigenous significance?

Onus regularly journeyed to the Barmah Forest where, it is recorded, ‘he would sit along the banks of the Murray River looking out over … its great trees reflected in the mirrored waters. There his uncle Aaron Briggs, also known as 'the old man of the forest', would tell Onus about his Koori heritage and the stories of the river.’6

In this respect, Fish and Storm Clouds (Guyi Na Ngawalngawal) is also a portrait of Melbourne-born Onus as ‘a fish out of water’, having been disconnected from his Yorta Yorta heritage and grown up in a family similarly disconnected from country; his father and uncle were born and raised at Cummeragunja Christian mission on the NSW banks of the Murray River.

Onus’ experience of displacement and dispossession provided fertile iconographic ground. One of his pictorial motifs was that of a jigsaw puzzle piece lifted out of the picture, shown askew as it will not fit. This device was pointedly used in his award-winning 1994 Barmah Forest landscape, a metaphor for his dislocation ‘caught between black and white, urban and rural, worlds.’7 In this way, Onus can be seen as interjecting in the academic pantheon of epic historical Australian landscapes painted by white men and influencing the writing of a new narrative, a process elsewhere described as responding to the landscape as ‘a cultural archive.’8

Lin Onus’ personal history, including the social and political activism of his family, along with his experience of racism, coloured the intellectual tone of his art. Just as his journeying to Maningrida in Arnhem Land and his relationship with Wunuwun bridging a cultural divide was a healing one, Onus wanted the same for his legacy: ‘I kind of hope that history may see me as some sort of bridge between cultures …’9

Onus’ talent has been broadly recognised: through awards such as Best Work in Introduced Media category at the Fifth National Aboriginal Art Award in 1988, and the Kate Challis RAKA (Ruth Adeney Koori Award), Melbourne, 1993; in the same year he was bestowed a member of the Order of Australia on the Queen's Birthday Honours List. He was overall winner of the National Indigenous Heritage Art Award, Canberra, 1994, as well as the People's Choice Award (Barmah Forest).

Onus has eighteen solo exhibitions to his name, including the important retrospective, Urban Dingo: the art and life of Lin Onus 1948-1996, organised by the Queensland Art Gallery in 2000, which toured nationally in 2001. And his work has featured in more than forty group shows in Australia, Asia, Europe and America, including the ground-breaking exhibitions: A Changing Relationship: Aboriginal Themes in Australian Art 1938-88 (S.H. Ervin Gallery, Sydney, 1988), Crossroads: Towards a New Reality: Aboriginal Art from Australia (Museums of Modern Art, Kyoto and Tokyo, Japan, 1992), Strangers in Paradise: Contemporary Australian Art to Korea (AGNSW and National Museum of Contemporary Art, Seoul, Korea, 1992), Aratjara: Art of the First Australians (Germany, London, Denmark, NGV, 1993), and Power of the Land: Masterpieces of Aboriginal Art (NGV, 1994).

In her review of his retrospective titled ‘Postmodernism without tears’, Christine Nicholls declared that Onus 'put urban Aboriginal art, as it is popularly known, onto the cultural map in Australia.’10 Lin Onus once declared himself ‘a self-confessed cultural mechanic.’11 Channelling Onus, academic and curator Ted Gott is succinct in his definition of the artist’s esteem, judging that it was Onus' ability to subvert the establishment and ‘to cut the legs off high art culture’12 that made him such an extraordinary artist. And yet Onus’ art proves that any culture can be changed, and for the better, by being brought into the fold and working at the problem from within. Lin Onus’ art continues to ask Australians to think about ourselves and the country we inhabit. And in the process, Onus has moved into the high art pantheon and become one of Australia’s acclaimed contemporary artists of renown.