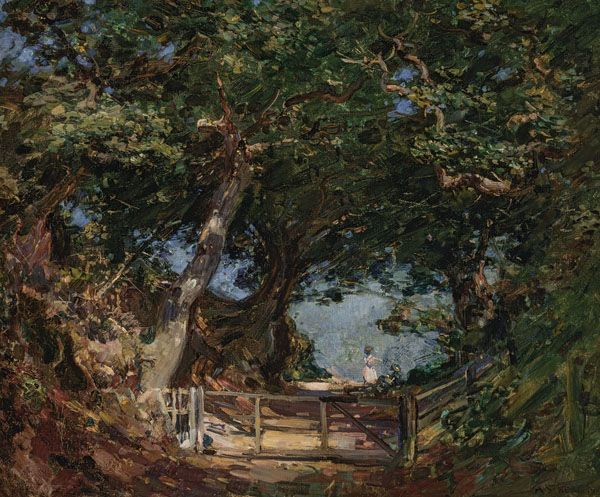 By Catherine Baxendale B Phil Hons in Blog
Lot:
The Oak Lane

Writing to fellow artist Walter Withers (1854-1914) in May 1909, Arthur Streeton reported, ‘I’m off with [Tom] Roberts on a cycling trip through Dorset to look for subjects for the Summer.’1 This excursion through Roberts’ native county would follow in the footsteps of JMW Turner (1775-1851) and John Constable (1776-1837), the two great forerunners of modern British landscape painting.2 The trip included a visit to Corfe Castle, built by William the Conqueror in the eleventh century and partly destroyed during the English Civil War.  Streeton’s best-known painting of the subject - Corfe Castle 1909 in the National Gallery of Victoria - adopted the sepia-toned palette of Turner’s watercolours a century earlier, presenting a typically Romantic image of the castle’s stony ruins beneath a sky of billowing cloud.

Originating from a separate leg of the artists’ journey, The Oak Lane is a picture of rural tranquillity.  Here we glimpse a woman walking down a quiet country lane, framed by dense curtains of sprawling foliage.  Streeton has perfectly captured the atmosphere of the English countryside in summertime, employing loose, broken brushwork to render dramatic contrasts of light and shade.  Streeton’s use of foliage as a compositional device in The Oak Lane is reminiscent of Constable’s 1826 painting The Cornfield in the National Gallery, London, where oak trees frame a distant view of crops and low hills.  The oak holds a powerfully resonant place within English history and folklore, serving as a long-held symbol of national prosperity and fortitude.  And yet The Oak Lane is also very much a painting of its time, embracing Edwardian-era notions of natural beauty, femininity and nostalgia.3

The Oak Lane dates from the most auspicious phase of Streeton’s time in England, when he began to enjoy a greater level of acceptance within the British art establishment.  Having arrived in London in May 1897, Streeton’s early years in England had been characterised by poverty, professional rejection and homesickness.4 His blossoming relationship with Canadian-born violinist Nora Clench and their subsequent marriage in January 1908 marked a vital turning point, providing Streeton with an expanded social circle and renewed artistic confidence. Streeton began to exhibit regularly in London and Paris and was elected as a member of the Royal Society of British Artists and Royal Institute of Oil Painters.5

As with other English landscapes of this period, The Oak Lane appears to have been held over for exhibition in Australia, making its first public appearance at the Victorian Artists’ Society Galleries in June 1914, on the eve of World War I. The Oak Lane was aptly described by a critic at the time as ‘a framed poem.’6 Streeton’s known fondness for poetry may well have extended to the following, from Alfred Lord Tennyson:

All his leaves
Fall'n at length,
Look, he stands,
Trunk and bough
Naked strength.7