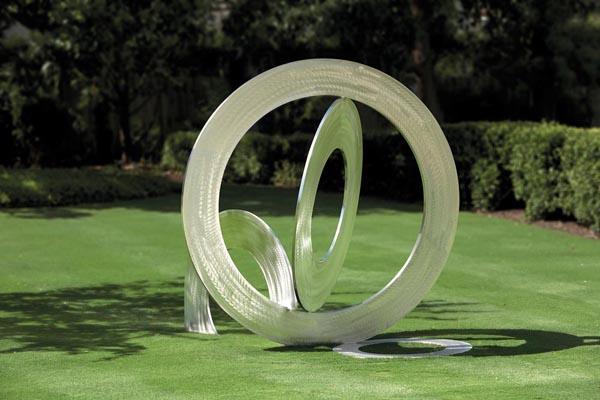 By Emeritus Professor Sasha Grishin AM FAHA in Blog
Lot:
Rings of the Sun III

Inge King’s oeuvre stretched over seven decades and, unlike many artists who peak early in their career and then spend decades in repeating their youthful triumphs, King’s work grew, developed and matured with age. She created some of her best work in the final decades of her life.

Rings of the Sun III 2004, King created when she was nearly ninety and belongs to her Celestial Rings series, which can be viewed as the culmination of her work as a sculptor.  Works from this series were acquired by the National Gallery of Victoria, Heide Museum and Gallery, and the National Gallery of Australia in Canberra and cemented her reputation as one of the most significant sculptors to have ever worked in Australia.

When Inge King died on April 23, 2016, she was a hundred years old and was one of Australia’s most celebrated artists.  In life, she discouraged emphasis on her biography and the fact that she was a survivor of the holocaust in which her sister perished; that she was a European-trained modernist with the experience of New York, who settled with her Australian husband in an artistically provincial Melbourne in 1951; and that she was an early female pioneer in what was essentially a male-dominated art form.  She demanded to be judged on her art and her art alone.

Although King’s practice is anchored in international developments in contemporary art, her voice became distinctly Australian.  She refused to inhabit a closely circumscribed niche, but felt the need to constantly reinvent herself in the morphology of her sculptural forms, the materials that she has employed, and in the broader conceptual context with which she has engaged.

Virtually more than any other contemporary sculptor in Australia, King has consistently been committed to sculpture as a public art – not sculpture as a commemorative memorial, nor sculpture as a private venue for personal gratification in the display of arcane knowledge or esoteric symbols.  Without succumbing to the temptation of making popularist sculpture to cater to the lowest common denominator with mimetic copies of popular icons, Inge King has made popular sculpture, which created new icons with which people have been able to identify and which people could enjoy and use in their daily lives.

Her Forward Surge in St Kilda Road, The Black Sun in Mildura, The Sun Ribbon at the University of Melbourne, as well as the Rings of Saturn at Heide,  are all what could be termed ‘inhabited sculptures’, in other words, they act as ‘people magnets’, drawing people over to interact with them.  They do not exist in splendid isolation, but interact with their social environment.  Her sculptures have become icons in Australia’s cultural landscape.  They have become landmarks within our cities and refuges in the non-urban areas.

There is a conceptual trajectory in the development of Inge King’s artistic vision.  Initially she sought the tools and the morphology to relate a sculptural narrative relevant to Australia, which had neither a nationalistic chauvinism nor depended on simplistic branding.  She made art that was true to the Australian experience.

In King’s development there were a number of false starts and even more interruptions thrown up by life before a suitable medium was determined and a technology mastered.  Subsequently she managed to establish her own independent artistic identity, which reflected the zeitgeist, but maintained an individual, distinctive and, what could be termed, ‘a feminine voice’.  She mastered the formalist language without becoming a formulaic formalist.  Later in life, after an outburst of joyous celebration of life forces with dance, music and sonorous notes of colour, her preoccupation changed from the physical and the emotional, to the spiritual and the transcendental.  Her Celestial Rings imagery, which appeared in the opening years of the new century, increasingly and successfully engaged with the ideas of the spiritual in art.

Unlike much of the art that engages with the anagogical dimension and becomes preoccupied with death and with eschatological themes, King’s late spiritualism affirms the beauty and joy of being and of all creation.  Her late celestial pieces celebrate our being in a beautiful and ever-expanding universe.  Her artistic vision has progressively grown in profundity and accomplishment.  Although her oeuvre is characterised by a consistent high quality, she has made her best work late in life.

In 2007, King noted: “Throughout my career as a sculptor I have been fascinated by balance and movement.  This made me abandon carving in wood and stone, for steel.  Assemblage enabled me to let forms leap into the air, balance shapes or anchor them precariously.  I use stainless steel to create lightness and floating movement.”1  Throughout her art, the properties of balance and gravity, movement and flight, plus an awareness of the surrounding environment and conditions of light, have all remained key preoccupations.  King had always been fascinated with the way we see the world and with contemporary materials and technologies.  Art for her has always been something that is interactive with society.

On seeing images from space taken from satellites, images of our universe that had never previously been available to humankind, King was inspired to make a series of works that explored this new relationship between our planet and the rest of the universe.  As was so frequently the case in her art, her quest was driven through an act of visual curiosity and by the question of how it was possible to explore these new observations through the formal strategies in sculptural form.  The circular form, which had been a feature of her art for a number of decades, was once more revisited, but the circular disks were not interpreted as suspended vertical shields, which the viewer was invited to visually enter and penetrate, but as horizontally orientated rings – like semi-translucent flying saucers.

Tiny balsa wood models of suspended rings and disks first appeared in King’s studio in about 2003 and early small bronze sculptures, including Rings of the Sun 2003, Rings of Saturn 2004 (two versions) and Rings of Venus 2004 followed.  These were small desktop sculptures rarely exceeding twenty by twenty centimetres.  The first major outing of this new series of work came at an exhibition in May 2006 at the Australian Galleries in Melbourne and was titled Birds and Celestial Rings.  King had embraced her new concept with exceptional vigour with an array of sculptures of different scale and materials, in steel, bronze and some with polychrome renditions.  Rings of the Sun II and Rings of the Sun III, both of 2004 and both in stainless steel, the first a metre in height and the second two metres high, demonstrated with beautiful lucidity the conceptual problem involved.  The structure consists of a suspended ring within a ring, almost at right angles to one another, with the arc of a half ring springing from this juncture and adding to the visual complexities of the compositional structure.  Another half ring lies in the horizontal position creating a harmony, but also providing a note of mystery and puzzlement concerning the flight and dissection of the ring in space.  The transparency of means heightens the sense of amazement as the viewer can physically follow the arrangement of these suspended celestial bodies, but emotionally cannot understand how all of these elements come together with such unexpected beauty and harmony.

The major piece at that exhibition was Rings of Jupiter III 2006,2 which was promptly acquired by the National Gallery of Victoria for its permanent display of Australian art.  It is a sculpture of monumental, but human proportions; although the three perforated suspended disks or rings at around two metres each have a human scale, their pure geometry discourages any anthropomorphic associations.  King has employed an angle grinder on the sleek, shiny stainless-steel planes that gives the surfaces a complex range of possible reflections, which was her well-established strategy to incorporate the beholder into the work.  It is a dynamic design where the angle on which the disks have been suspended prevents the eye from resting on any single spot as it moves around the composition, encouraging the viewer to physically move around the work.  The marks on the steel and the deliberate seams in the rings prevent the sculpture from being read as a piece of industrial production – it is clearly handcrafted and bears witness to the intervention by the human hand.

Rings of the Sun III 2004 marks one of the defining moments in the development of King’s artistic vision.