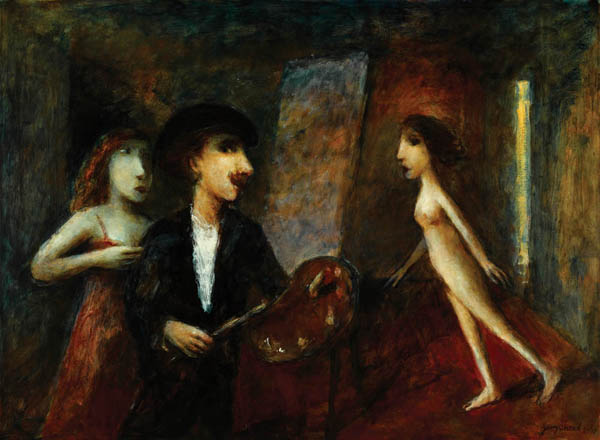 For Shead however, the series is more than a homage, or a simple reworking of masterpieces.  It is much more complex and personal.  The paintings portray, not the art of European Masters such as Goya (1746-1828), Velàsquez (1599-1660) and Rembrandt, but the Masters themselves in the intimate act of creation. In each work the artist is accompanied by the mythical Muse of poetry, Erato, who appears to the Masters as a revelation, often floating around the studio and bathed in a radiant light.

‘The Artist and the Muse’ series can thus be read as autobiographical, charting the importance of the Erato in Shead’s own creative process.

‘Shead is an artist who in most instances has to enter the work by putting himself into the composition – whether he be Lawrence, Prince Philip, a dancer or, in this case, an artist.  However by entering a composition , this does not imply that he ‘owns’ it, as painting grows through its own internal logic and momentum; he enters it to give it life, then participates in the delight and agony of its growth and development.  On one level, these are strangely autobiographical paintings where, in a not too unkindly manner, we can note that we encounter the artist in period dress voyeuristically exploring the world of the Old Masters.’2

In The Jealous Muse (Rembrandt) 2000, Shead depicts strong forces at play between the artist, Erato and the Muse-model, who poses for the artist. In a rare moment of truth, the viewer is permitted to share the artist’s own creative struggle, the urge to create, tempered by the anxiety of failure. The artist’s gaze is concentrated solely on his Muse-model as she levitates before him, dream-like. A similar composition was employed by Shead in the larger painting, The Studio 2001, which was purchased by the Art Gallery of New South Wales in the same year.