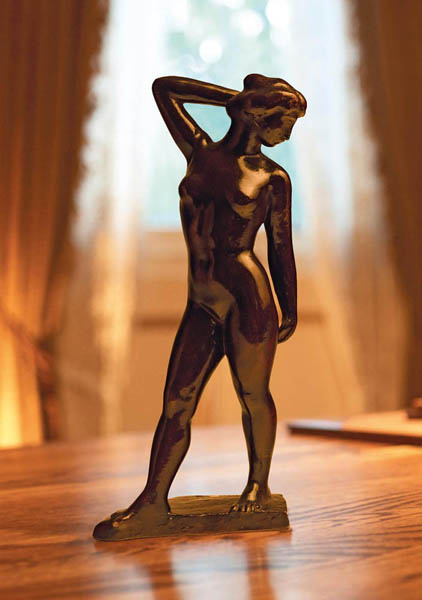 The naked female form fascinated the famous French artist Aristide Maillol throughout his lifetime. The present domestic-sized bronze sculpture, Baigneuse Debout se Coiffant, le Coude Levé, is a very fine and characteristic example of his sophisticated work. It resonates with the spirit of warm sensuous physicality that enlivens the work of his contemporaries Auguste Rodin (1840-1917) and Pierre Bonnard (1867-1947). It is now generally agreed that Maillol’s almost sole emphasis upon the naked female form paved the way for its later acceptance as a continuing subject by two of Modernism’s greatest sculptors: Alberto Giacometti (1901-1966) and Henry Moore (1898-1986). Together with Rodin, Maillol kept figurative form alive and almost single-handedly transformed the sculptured figure in the landscape from the state of being an ornamental statue to becoming an artistic sculpture.

There is a marked difference between the two categories as one, statues, tend to look back to emulate classical Greece and the other, sculpture, looks forward to respond to a new Modern world and to evolve more appropriate ways to embody its different aesthetic needs. In a certain sense this is somewhat like Henri Matisse (1863-1954), Maillol’s great painting contemporary who, like Maillol, shared an early academic training and moved beyond it to embrace new aesthetic principles. Looked at in this way, Matisse’s obsession with the subjects of the interior and the window is matched by Maillol’s obsession with the plinth and the female form, yet neither artist was held back or blinkered by such a limited subject range. Both artists are characterised by an organic, self-generated and slowly evolved grasp of Modernism.

Consequently, Maillol is considered to be one of the masters of figurative sculpture in the Twentieth Century. His most famous saying is: “I do not pretend to invent anything, no more than the tree invents fruit”.
This seemingly simple statement gives some hint of his lifelong organicist view of the art of sculpture.

Maillol was educated in Paris by two of the great classicists of French painting: Jean-Léon Gérôme (1824-1904) and Alexandre Cabanel (1823-1889). Both of these academy-based artists were immensely popular in their own time and their work was very eagerly collected all over Europe. All of their many students did extremely well and some became quite famous – that is, artists such as Jules Bastien Lepage, Odilon Redon and the American Thomas Eakins. However, Maillol became the most famous and the most successful.

Both of his teachers in Paris emphasised the role and place of the human body in art. The realistically depicted body was seen to be the repository of all that was human and all that was worth painting. Much of this emphasis was generated by the aesthetic preferences of the time. A good part of it was occasioned by the growth of institutions and art academies throughout Europe and England that eroded the place of apprenticeship and studio-based teaching. Needless to say, before the invention and acceptance of photography, art based upon naturalistic observation held sway. Unsurprisingly, therefore, the mid-Nineteenth Century was the heyday of an accessible type of romantic academicism that stressed anecdotal content, history painting, exotic locations, moral stories and naturalistic depictions.

A distinct line runs through Maillol’s work that links his work to the age-old tradition of modelling. Maillol’s sculpture is not constructed, collaged, carved, chipped or welded – it is modelled – whether this be in clay, wax or plaster. Built structural forms run through Maillol sculptures and the hand of the artist is always evident. Maillol’s materials are humble and time tested and purposely restricted to the materials of bronze, lead and iron. Often, his use of these traditional materials leads to striking early Modernist compositions where long established techniques are made to express new harmonies. This can be most obviously seen in his three sculptures, Summer, Venus without Arms and Kneeling Woman: Monument to Debussy, on the central staircase of the Metropolitan Opera House in New York and his lead sculpture The River, in the garden of the Museum of Modern Art in New York. In both these locations Maillol’s work looks completely in place and adds to an ambience of calm and reserved airy grace – this is especially the case in his work at MoMA where the naked female figure, based upon one of William Blake’s Fallen Angels, suspended over the still water of a garden pond, presents a harmonious and perfectly balanced visual whole. This is transitional Modernism at its best.

This integral balance and poise can also be seen in the present work, Baigneuse Debout se Coiffant, le Coude Levé. The domestic-sized bronze female figure stands upright while combing its hair in an athletic pose that displays the body. The pose of the figure is shown in contraposto, that is, a form of counterpose where the line of the hips is different from that of the shoulders. This compositional device, in painting and sculpture, gives the figure a more interesting play of lines that emphasise volume and allow for a more dynamic play of shadows on the surface of the work. The device has been used for about 2,500 years and is a great technical leap forward from the stiff frontal or side poses of ancient Egyptian sculpture. The contraposto device owes its existence to the theories of the Greek sculptor Polykleitos (400 BC) and its invention was momentous. In Baigneuse Debout se Coiffant, le Coude Levé, Maillol has used the device in a way that owes its pose to the body of stretching athletes and athletes receiving laurels in Greek and Roman frescoes and to their depictions in the paintings of the highly influential French artist Puvis de Chavannes (1824-1898), who was President and co-founder of the Société National des Beaux-Arts (National Society of Fine Arts) when Maillol was a student.

The dynamic structure of Maillol’s sculpture Baigneuse Debout se Coiffant, le Coude Levé enlivens the volumes and lends it an unabashed ambience. This and the delicacy of modelling take it well beyond anything that could be called a figurine. The present work bears comparison with two of Maillol’s related works: Bather with Arms Raised of 1921 and his Three Nymphs in the Tuileries Gardens in Paris. The fact that the three sculptures share some attributes gives an indication of Maillol’s long-term fascination with the subject matter and its underlying importance. It’s not so much a case of him repeating himself, as lesser artists might, but of exploring all the artistic variations of the subject matter – in this, Maillol’s position is similar to that of his great contemporary Paul Cézanne (1839-1906) whose subject matter was narrowed down almost exclusively to still life themes. Both artists worked on a very restricted subject matter in order to explore and exhaust all the possibilities of the medium; they acted as though the subject matter was almost irrelevant and what really concerned them was the aesthetic exploration of form that thematic restriction allows. This reminds one that it is not the subject matter that makes the art. Thus considered, Maillol’s famous statement above gains a new meaning – the artist did nor consider himself to be an innovator, perhaps hinting at his disapproval of others, but rather as an artist whose body of work has a internal stability and yet displays an external variety – as a tree has fruit that is the same each year, yet it varies with each growth.

Maillol was born into a long artistic tradition, but he was not defined by it. His art in sculpture, painting, drawing and etching was not limited by his training and he rose above it to be one of the most significant French sculptors to straddle the Nineteenth and the Twentieth Century. John Rewald, the great German-American expert on the art of the Nineteenth Century summed up part of Maillol’s achievements:

To celebrate the human body, particularly the feminine body, seems to have been Maillol’s only aim. He did this in a style from which all grandiloquence is absent, a style almost earthbound and grave… The absence of movement is, however, compensated by a tenderness and charm distinctively his own.1