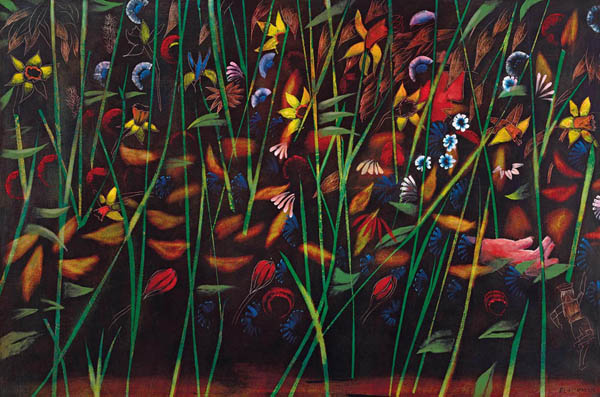 By menzies in Blog
Lot:
The Flower Garden

The Flower Garden is Charles Blackman at his most ebullient – here, the artist has created a multi-layered visual spectacle that draws the viewer in at first glance. Flowers and insects are amongst Blackman’s most loved subjects and this work brims with his characteristic colour and movement. The natural world and its delights are celebrated, capturing the lost world of childhood and innocence which are a defining sensibility in his art.

This work was painted in the early 1980s, when Blackman had moved to Queensland with his new wife, Geneviève de Couvreur, settling near the semi-rural area of Buderim. The artist drew inspiration from his new surroundings – on one side was the sparkling Pacific Ocean, on the other were sugar  cane fields and the Glasshouse Mountains. This period of the artist’s career was a particularly creative one, the sense of joy in these works is palpable. As Thomas Shapcott notes, ‘it is not hard to see in their qualities of joyous execution and mature ease something  of the creative ebullience of the new life the artist had now embarked upon.’1

Blackman had great success with his exhibition, The White Cat’s Garden at the Bonython Gallery in August 1978 and felt immense pressure to keep up with the resulting social and professional demands. His move north liberated him both physically and creatively from the burden of galleries and dealers; he had the freedom to paint without limitations and with conviction. The Canecutter series was a product of this new-found freedom, which iclosely relates to present work in its style and subject.

The present work demonstrates the artist’s technical skill which is evident in the various methods employed to reveal different layers of the composition. Blackman layers colour over the entire canvas then a final, darker layer which serves as the background for the composition. The artist ‘scrapes back’ areas of the top layer in leaf forms revealing the brilliant colours hidden underneath. Here, Blackman has used a deep brown as the final layer which highlights the spectrum of colours beneath. The artists has also used a masking technique to obtain the long, straight shape of the stems and hand-painted in handfuls of bright, colourful blooms. A figure is just visible beneath the layering of stems and flowers, bringing depth to the composition. As a final flourish, Blackman has ‘drawn’ in the outlines of flowers and, in the lower right corner, a small doll-like figure. These playful touches imbue the work with a sense of wonderment, a precursor to the Rainforest series that followed on in the mid-1980s.

The Flower Garden is an expression of the artist’s contentment, painted during a happy and productive phase of Blackman’s career. The subject reflects the joy and inspiration he found in the landscape around him and also demonstrates the artistic skill and versatility Blackman possessed as an artist.