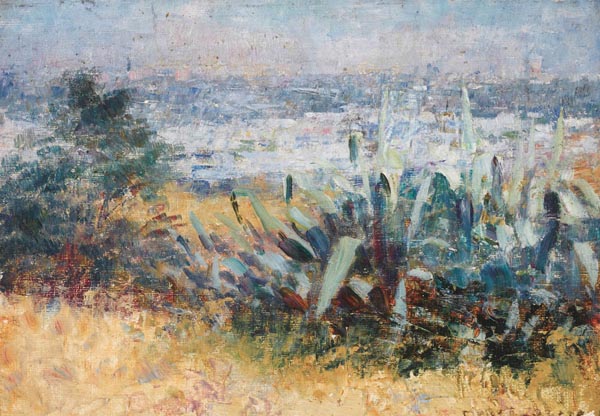 Frederick McCubbin’s View Towards the City from Kensington Road, South Yarra is a fine example of his mature style of painting. It is bold and fresh with a strong emphasis on the changeability of light, brilliant contrasts of colour and strongly articulated surface texture. This ‘little gem’ is from an acknowledged high point in the artist’s career and comes with an impeccable provenance – a gift from the McCubbin family to Dame Pattie Menzies, wife of the former prime minister.

The National Gallery of Australia’s 2009 exhibition McCubbin: Last Impressions 1907-17 re-introduced the Australian public to the importance and veracity of McCubbin’s last decade of work.1 These joyful oil sketches and paintings, produced following McCubbin’s first and only trip to Europe in 1907, are a revelation. They combine the atmosphere of J.M.W. Turner (1775-1851), much admired by McCubbin, with an intimate knowledge of English and French en plein air and Impressionist art.

Although it is difficult to believe now, McCubbin’s star remained relatively static in the early part of the twentieth century. His reputation was overshadowed by his friends and painting compatriots Arthur Streeton (1867-1943) and Tom Roberts (1856-1931). While both Streeton and Roberts enjoyed large retrospective exhibitions within a year of their respective deaths, McCubbin’s retrospective wasn’t until 1955, forty years after
his death.

Significantly, the Frederick McCubbin Centenary Show was opened by Prime Minister Robert Menzies at the National Gallery of Victoria on 4 November 1955. The artist’s son Hugh McCubbin, who had taken over lobbying for such a show from his recently deceased brother Louis, used the occasion to offer Menzies the choice of a painting for ‘The Lodge’. This included Sketch of Princes Bridge and three other landscapes that Hugh described as ‘in the old Man’s best manner’.2 Although the current painting was gifted to Dame Pattie Menzies, and passed on to her son Kenneth, it is a clear sign of the friendship that existed between the two families.

View Towards the City from Kensington Road, South Yarra was painted from a vantage point in or near the McCubbins’ house and property at 42 Kensington Road, South Yarra. The grounds of ‘Carlsberg’ were much loved by McCubbins and provided a fertile visual source for his work up until his death in 1917. In a letter to Tom Roberts, McCubbin stated: it is ‘the loveliest place I have ever lived in, a charming old colonial house of stone, cool on the hottest days, perched right over the Yarra with three acres of garden and trees.’3

Companion paintings such as The Yarra from Kensington Road, South Yarra 1911, were painted overlooking the gardener’s cottage of the neighbouring Como estate (‘a dilapidated house which my father loved to paint’ recalled the artist’s daughter Kathleen). Como House’s extensive grounds ran all the way down from McCubbin’s fence to the edge of the river. Others, such as The Lime Tree (Yarra River from Kensington Road, South Yarra) 1917, included visual references to the industrial areas of Burnley and Richmond with its quartz and stone crusher.

Although the yellow tower of the latter structure may be the one depicted on the far right of the painting, View Towards the City from Kensington Road, South Yarra adopts an elevated view that is orientated more towards the direction of Melbourne. The tripartite division of the composition imparts vitality; the golden yellows for the foreground, grey-greens for the foliage in the middle and a cooler blue and white palette for the background water and sky clearly delineate the scene into individual elements. This includes the prominent flowering agave (Agave Americana), an introduced plant that is still common in that area of the Yarra.

It is an impression of one of nature’s quiet corners, known intimately to the artist. The painting is confidently executed using square brushes which are faceted using a palette knife: a brilliant interweaving of blended tones that produces a feeling of hazy domesticity.