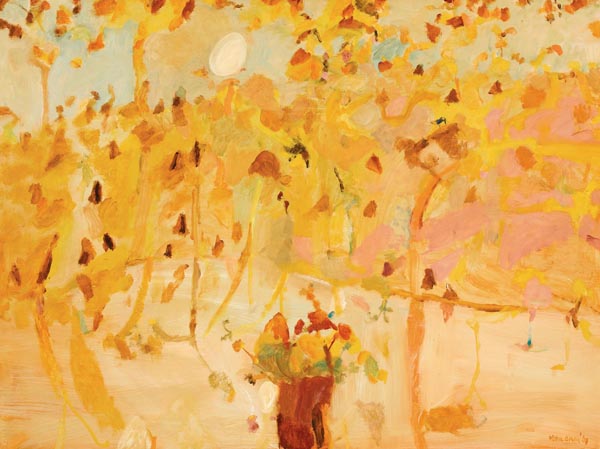 By in Blog
Lot:
Untitled

Throughout his productive and fascinating career, the one subject, or ‘muse’, which has continually captivated John Olsen, is the natural world. From the minutest of swamp critters, field mice, frogs, pelicans and giraffes, to the tributaries, endless ocean and expansive inland desert, all have held Olsen’s attention. While at times his subject matter has ventured out in other directions, it has always returned to nature’s life force, the land and the change in seasons, which has been his ultimate fascination. In the outback Olsen is the curious young student with boundless enthusiasm, ever eager to learn, in one of the planet’s most extraordinary classrooms. As a student, Olsen keenly studies the effects of the ebb and flow of drought and flood across this diverse continent. He pauses in reflection of the voids of the salt pans and celebrates the explosion of colour that follows the big rains, as life that has been dormant seizes its moment to burst open. Olsen revels in the cycles of the land.

Also essential to appreciating Olsen’s portrayal of the landscape is an understanding of the influence on him of mark-making from the traditions of both Chinese and Japanese calligraphy. After an early introduction by his art teacher, Desiderius Orban (1884–1986), in 1958 Olsen explored Zen Buddhism through texts such as D.T. Suzuki’s Zen and Japanese Culture and Eugen Herrigel’s Zen in the Art of Archery. Key to the Zen calligraphic practice is a strong connection to the spiritual, and the ability to clear the mind, so that the mark making can flow. At the time Olsen wrote in his journal, ‘Zen realises that our nature is at one with the objective nature… in that sense we live in nature and nature lives in us.’1 More recently he expanded, saying ‘I am in the landscape, and the landscape is in me, that’s the experience that drives the line. Once I get a central rhythm going, it propels itself. I feel a rapport and one thing suggests another, asks a question, sees a connection, just like the poetical form. It’s telling me, push me this way, more colour here… It’s all about filling space, and leaving space, the yin and yang, to make it work.’2 As a result of the inclusion of this philosophy into his practice, Olsen has been able to find balance between abstraction and figuration without compromising on imagery and content. In conjunction with his implied aerial view, it also provided him with a stunning signature interpretation of the landscape.

In 1957 Olsen was the beneficiary of an opportunity to live and paint in Europe, generously sponsored by businessman Robert Shaw, upon the advice of Sydney Morning Herald art critic, Paul Haefliger (1914–1982). Olsen spent much of his time in Spain and revelled in the Mediterranean landscape and lifestyle. It allowed him to explore the possibilities of Zen philosophy where he relinquished control in his compositions, instead opening up to the new possibilities of organic meandering lines traversing the pictorial space. On his return to Sydney in 1960, Olsen’s experiences abroad allowed him to see his homeland anew. Compared with the dark time worn walls and cobblestone laneways of Spain, he now appreciated the unique Australian light and reflected this in his palette, and in doing so, embraced the inherent energy of the antipodean continent.