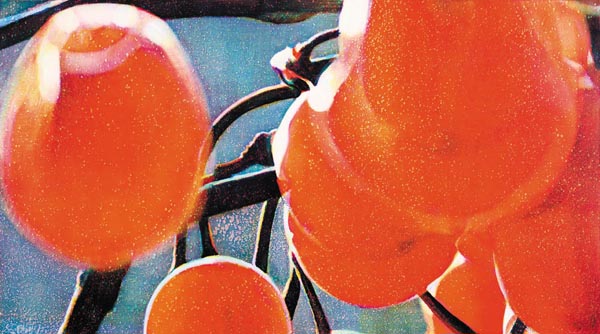 When this painting was completed in 2003, Tim Maguire’s work was more than ever being lauded by dealers who claimed unprecedented international interest in his work. By that time Maguire had lived and worked overseas for over ten years, first in France and then the United Kingdom, where he continues
to reside.

Having won the coveted Moët & Chandon Australian Art Fellowship in 1993,1 and having ascended onto the international stage, Maguire’s distinctive, large-scaled paintings have attracted internationally prominent art collectors, dealers and curators; commentary about his artwork invariably centres around his process and technique, arguably the most fundamental aspects of Maguire’s work.

Untitled 20030201 generally followed his usual painting process which ultimately derives from colour printmaking techniques with the superimposition of basic colour plates. It generally starts with taking a photograph or image and scanning it into a digital format which is then manipulated digitally, often involving colour-enhancing and cropping. The image is then separated into three constituent primary colours: cyan, magenta and yellow. Each subsequent image is printed and used as a template or sketch from which Maguire paints onto large canvases, one layer at a time. Before completing each layer, a crucial supplement is added – the vigorous but measured splashing, flicking or throwing of solvent onto the canvas.2 Maguire’s process is worthy of detailing because it is central to reading his work. It is manifest of his hungriness, his passion for the physicality and chemistry of painting, which he likens to Jackson Pollock’s practice: ‘They [Maguire’s paintings] have a kind of physicality and theatricality, a Pollock-like dynamic in the making of them, involving various leaps in the dark’.3 Maguire, regarding these leaps-of-faith as developing his gestural vocabulary, explains, ‘I know if I flick my wrist in a particular way, or, say, put my shoulder more into it, I’ll get different sorts of dots and different spray patterns’.4

During this process, Maguire repeatedly works through a system of envisaging an outcome through deconstructing an image, adapting it and then reconstructing it anew. Nevertheless it is not simply ‘deconstruction-reconstruction’ for the reason being that the end picture is very different from its beginnings. It evolves in a contemporaneous manner rather than repeats itself in a traditional sense.

Considering Untitled 20030201 as case in point, Maguire has transposed the painted image as a much larger fragment. Perceivably, the original image was magnified yet, here, its amplification remains largely unfocused. The blurred fruit is captured as deliciously, freeze-framed treats which ensnare the viewer’s senses. The freshness and vigour of Maguire’s picture-making process comes through abundantly in the sensuous forms of the fleshy red-orangey fruit, their intensity heightened by the blue background.

Consequently, if the underlying notions of mankind’s ever-progressive technical proficiency and processes of alchemy do not communicate their languages to you, then the visceral sensuality of nature’s beauty will. Inherently, and regardless of how this painting is viewed, this microscopic observation is bestowed with the same mystical and magical quality that one finds in sublime still-life pictures from the Dutch Golden Age through French modernists like Paul Cézanne (1839-1906).

By scaling it up to cinematographic proportions, Maguire achieves the actuality of photography (from afar) and the obscurity of abstraction (viewed closely). Indeed, Maguire’s spur-of-the-moment switch from American to European art schooling was, although he felt otherwise at the time, a serendipitous move when you consider the influence of seventeenth-century Dutch and Flemish still-life, whilst the influence of abstractionism remains apparent. Maguire’s commitment to this formula was made clear in his earlier statement, ‘My subject matter is painting – the relationship between figuration and abstraction, the physicality of the surface and the illusion of the three-dimensional space’.5

1. This annual award bestowed $50,000 and one year’s accommodation at the Moët & Chandon studio located in the grounds of the Abbey of Hautvillers, Epernay in Champagne, France