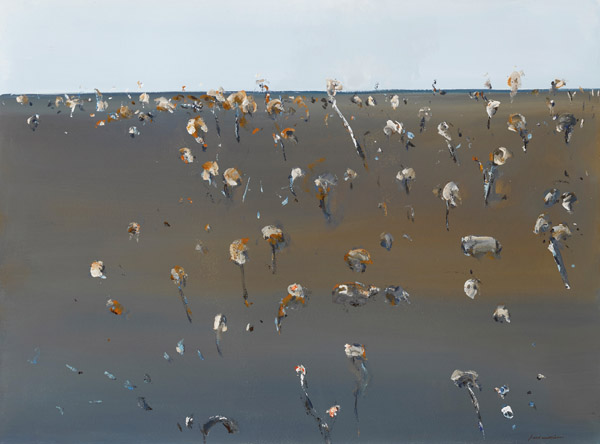 By in Blog
Lot:
Wilsons Promontory

Fred Williams’ deliberate yet vivid depictions of the Australian bush are the product of his truly unique approach to landscape. In contrast to the Antipodeans (from which he was famously excluded), Williams was less interested in the mythologies of Australia’s past than in observing and absorbing the present. In doing so, he invented a form of visual shorthand for the Australian landscape, which allowed him to capture the eternal bush with apparent immediacy and lucidity.

In the early 1960s, Williams began making excursions to areas around Melbourne where he would paint en plein air with gouache, quickly capturing the light and conditions of the landscape around him.  Wilsons Promontory is a fine example of Williams’ outdoor paintings of the rugged Australian landscape. Williams had a keen appetite for dissecting all before him in painterly notations that allowed him to document extensive areas of the Australian bush in gouache and oil on paper.

Fred Williams pondered the landscape with brush in hand, like an extension of his conscience in which he would translate his experience directly onto the canvas or paper in front of him. Like many of the best landscape artists, Williams preferred to work in situ. Without having to translate studies later in the studio, his work delivers a more immediate representation of his experience.  As writer Stephen Murray-Smith recalls, Williams was:

... determined, obstinate, human, apprehensive, conscientious ... above all a high-minded tenacity of purpose ... Williams watches himself, disciplines himself, analyses his powers of concentration ... And he constantly blames himself for not doing enough. It is a far remove from the popular conception of the bohemian artist.1

Williams’ circle of friends included many prominent artists such as John Brack (1920-1999), but he did not belong to any artistic group. He was an individual, an explorer armed only with his brush and his imagination. Omitting any obvious focal point, Williams frequently chose to paint areas of the Australian bush that previous artists had neglected.  Nevertheless, he drew influence from Charles Conder (1868-1909), Arthur Streeton (1867-1943), John Russell (1858-1930) and Walter Withers (1854-1914), especially with regard to their interpretation and treatment of light.

In Wilsons Promontory, Williams experimented with the notion of a minimal landscape.  The painting features a restricted palette dominated by large expanses of earthy brown and blue. Williams has drawn an implicit contrast with the rolling, verdant hills of European landscapes as depicted by the old Masters. By precisely capturing the most distinctive aspects of the Australian landscape, Williams created a visual language that all Australians can identify with and relate to - a fondness and sense of ‘home’.  As Sasha Grishin wrote:

In Australian landscape art there is an apparent irreconcilable contradiction – on the one hand the landscape is markedly uneventful, unspectacular and non-picturesque in the European sense, but on the other hand it is not dull and monotonous.  It has the quality of precious detail, minuteness of observation and enormous complexity, but on a miniature scale … The implication of Fred Williams’ innovation was that he proposed an alternative way of seeing the landscape that took this contradiction into account, where we have the formal, flat structured outline … contrasted with a precious complexity, irregularity and intricacy of detail.2

Fred Williams is an undisputed leader of Australian landscape painting and is held in high esteem by both Australian and international audiences, as the only Australian artist to have been honoured with a solo exhibition at the Museum of Modern Art in New York, in 1977.  Wilson’s Promontory further attests to his mastery of medium and subject.