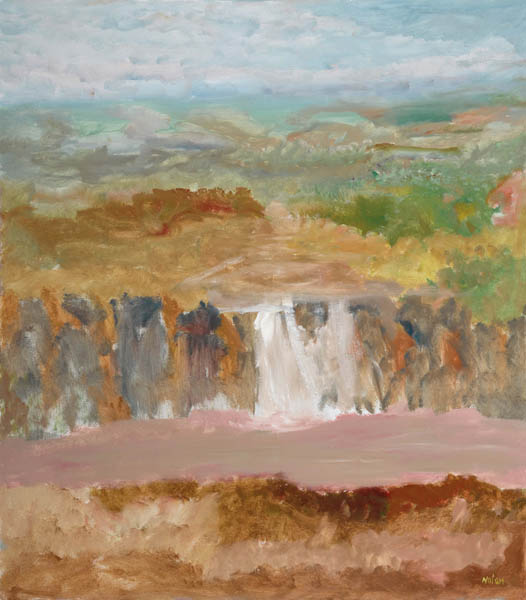 The first question confronting any artist painting the landscape is ‘where is the viewpoint’?  Should it be as seen from a standing or sitting position, with a low horizon and lots of sky for a dramatic interpretation as in the bayside works of Rick Amor (born 1948) or, perhaps a high viewpoint, or no horizon, as in the work of Fred Williams (1927-1982)? A high viewpoint looking down into a deep valley, as with the works of Arthur Streeton (1867-1943), allows for both atmosphere and detail. The first landscapes of Sidney Nolan were painted when, as Private Nolan of the 22nd Supply Depot Company, he spent an extended period in the Victorian Wimmera town of Dimboola. His long days guarding the large supply dumps of canned food were relieved by the chance to paint in the outdoors, using the paints his patron, Sunday Reed, had thoughtfully sent up from Melbourne. The unrelenting flatness of the wheat country did not offer much for the aspiring artist, so he climbed to the top of the only two structures of any size in the town, the footbridge over the railway line and the wheat silos along the siding. From there he was able to gain a broader view and create some of his most interesting early works, which led directly on to the Kelly paintings made back in Melbourne when he pre-emptively concluded his military career, having gone Absent Without Leave in 1944. While the landscape was important to the Kelly pictures, it became the backdrop to the narrative of the Kelly story. His interest in pure landscape was however rekindled in a significant way in 1948 that would have a profound effect on a whole generation of Australian painters. The later war years had been stressful, maintaining his double life as ‘Robin Murray’ while awaiting the outcome of his desertion from the Army, a matter finally resolved in June 1946 when he was dishonourably discharged from the service.

In June of 1948, Nolan left Melbourne for good and set out on an extended outback trip that saw him traverse much of the country. He travelled by any means possible – train, truck, boat and aircraft, many flights being local runs on simple machines that flew low and slow over the land. The opportunity to fly over the vast outback, seeing the topography and geology in close detail, had a profound effect on how he saw the land and he set about creating a new series of paintings based on an aerial view of the arid inland. The forty-seven works, produced over 1949-50, were a major advance in his style and struck a chord amongst his wider audience. The signature work, Inland Australia, won the Dunlop Art Award, important recognition that also carried a useful prize of £250, some $12,500 today. But even more significantly, the Tate Gallery in London purchased the painting from an exhibition of Nolan’s work at the Redfern Gallery in 1951. Entering the collection of the most important contemporary gallery in Britain was sufficient encouragement for Nolan to move there with his wife and family, the place he would make his home base for the rest of his life. The view of the land from above became a signature motif for Nolan, using it for many locations from Antarctica to the Greek Islands. In 1983, he reprised his outback aerial studies and painted the present work, a view of the King’s Cascades on the Prince Regent River in the Kimberley region of Western Australia. Now a popular tourist destination, where large tour boats nudge right up to the white water, Nolan has pictured the falls from above, allowing a view both of the river but also the sweeping plain that continues on to the horizon. The work came at an important moment for Nolan, for he was depicting his home country of Australia at the moment when he purchased The Rodd, an Elizabethan manor house on the Welsh border where he was to remain until his death in 1992. He was making the statement, perhaps, that he could remain a truly international artist, at home in the Australian outback while, as Sir Sidney Nolan OM AC RA, comfortably at home in establishment Britain.