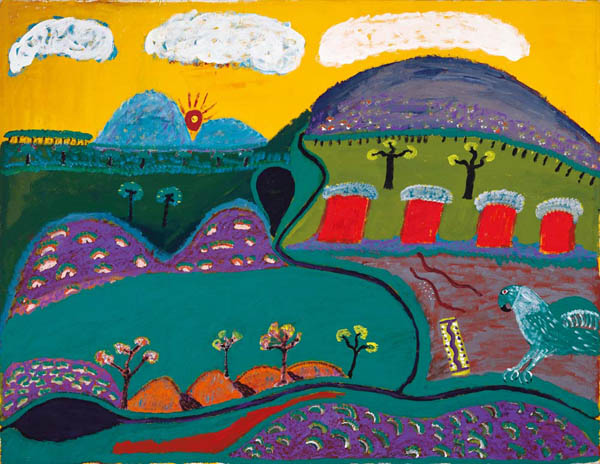 By Jane Raffan in Blog
Lot:
The Four Archers

In 1988, Ginger Riley exhibited along with fellow Ngukurr artists in the community’s first commercial show, startling visitors with their striking bold compositions and brilliant colour. At the opening, Riley was asked by a journalist why his sea eagle was green and not white. ‘It looks better’ he replied, ‘more powerful.’1

This simple response illustrates Riley’s artistic authority from the get-go, and gives insight to his unique vision and talent. Decades before Sally Gabori finally swept away old notions of what Aboriginal art could and should look like, Riley, the ‘boss of colour’2, was re-shaping this dialogue in a climate when barks – the familiar output from his Arnhem Land country – and Papunya Tula paintings, were widely believed to reflect the norm in Aboriginal art production.

The present work was acquired by the current owner in 1990, the year Riley began experimenting with acrylics on paper, after which he fully ‘embarked on his colourist adventure’.3 1990 was also the year Riley held his first solo exhibition, which earned him early accolades followed by a string of awards.

In 1992 he won The Alice Prize, which resulted in a commission for the Australian Embassy in Beijing. In 1993 he won the First National Aboriginal and Torres Strait Islander Heritage Commission Art Award, and a work featured in the ground-breaking international exhibition Aratjara: Art of the First Australians, after which he began to sign his paintings.4 In 1994, he won the John McCaughey Memorial Art Prize (acquisitive; NGV) and participated in the Cuban Havana Biennale. In 1996, Riley was awarded the Aboriginal and Torres Strait Islander Arts Board of the Australia Council Fellowship for 1997-98, and in 1997 he became the first Aboriginal artist to receive a major retrospective exhibition at the National Gallery of Victoria.

The seeds of Riley’s ‘incandescent vision’ of country were sown in a chance meeting with Albert Namatjira in the 1950s, during Riley’s time working as a stockman. Judith Ryan records that Riley was stirred after seeing Namatjira painting ‘his colour country.’5 Landmark exhibitions, such as the NGV’s Colour Power: Aboriginal Art Post 1984 (2004), mobilised a broader understanding and appreciation of the breadth of Aboriginal contemporary art practice, and individual geniuses amongst remote-based practitioners who exploited the power of colour. For Riley, depicting his ‘colour country’ meant painting the metaphysical power of place; its interconnectedness with custodial responsibilities and traditions, more than concerns over physical renditions of place: ‘same story, different country, different time.’6

Riley was jungkayi, custodian of his mother’s saltwater country centred on The Four Archers, a group of eroded volcanic rock formations in the Gulf of Carpentaria, near the mouth of the Limmen Bight River, about 110 kilometres from Ngukurr. Ngak Ngak, the white-breasted sea eagle, is sentinel of this country. In the present work, The Four Archers are depicted in multiple, emphasising their significance and reflecting different viewpoints:7 in the foreground, riverside, as large rounded rocks, and in the middle ground as crimson towers with vegetation atop. The unusual bright yellow sky with heavy clouds is a tell-tale harbinger of the life-giving wet season rains. The sun is an heraldic symbol for Riley himself, while clouds also reference his mother.8

Serpents feature prominently in the creation iconography of Riley’s oeuvre, including the angry fire-breathing Bulukbun (representing disorder and chaos), often seen looming on the horizon. Most prominent, however, are those from his mother’s custodial traditions. Garimala, a taipan who created the Four Archers through writhing, is represented as a duel-serpent travelling through riverine country, past eggs laid near the river (heavy as stones and laden with meaning). Nearby, under the watchful eye of Ngak Ngak, lies a message stick: an invitation to country, or announcement of important men’s ceremonies.

Ryan documents that Riley preferred to paint in sunlight, which brought extra vividness to his compositions. This work exemplifies the result: a magnificent and striking early “encounter, like a flash”9 with his unique palette and conceptualisation of country.

8. Ryan, Ginger Riley, ibid., p. 30; a yellow sky and heavy clouds featured in the painting selected for the cover of the catalogue for this important exhibition