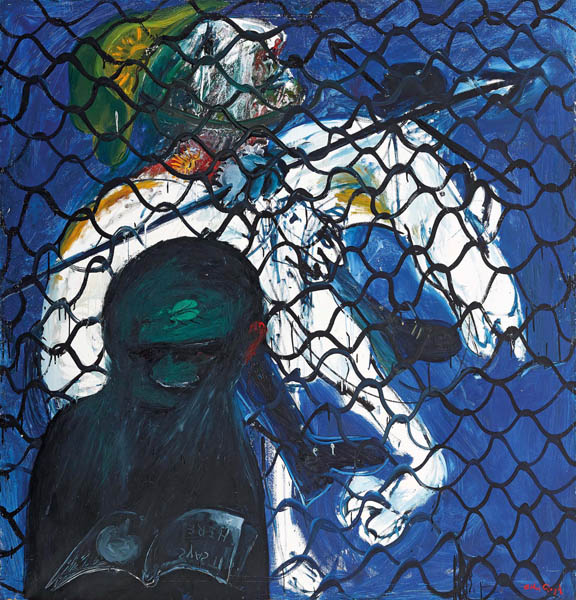 By Tim Abdallah in Blog
Lot:
It Says Here

The many ideas and notions explored by Arthur Boyd, and which found their way into his art, never threatened to overwhelm him. Since the early 1940s when he was still a young man and unknown artist, he had looked for ways to give depth to his thoughts by taking an omnivorous approach to stimuli. In the late 1950s he left Australia and based himself in London. As for many Australian artists, it was the opportunity to see the work of the great European artists close up as well as to work amongst and take a place in the international art world that prompted the move. Boyd also wanted to escape Melbourne’s claustrophobic art scene.

Some twenty-five years later Boyd found himself established in London, the veteran of numerous exhibitions at prestigious galleries, the recipient of critical and commercial success, all capped off with his selection to be the Australian representative at the 1958 Venice Biennale. Australian Scapegoat, painted a year or so before, was the painting selected for this most prestigious event. The painting belongs to a group of works loosely conceptualised around the story of the Australian Anzac legend known as Simpson and his donkey. Boyd, not a military man himself, could identify with this peaceful figure who famously gathered up the wounded from the battlefield and transported them using a donkey to the beach hospital at Gallipoli. Simpson and his donkey offered Boyd a motif that he was able to identify with personally, that was strongly Australian and importantly had clear possibilities for the creation of an iconic visual motif. In this respect Boyd is following the path blazed by Sidney Nolan (1917-1992) with his ‘Kelly’ series, and Boyd’s own ‘Bride’ and ‘Nebuchadnezzar’ series.

The paintings from this group incorporate the figure of an Australian digger, slouch hat and ANZAC badge clearly depicted, in an apocalyptic landscape with animals drawn from art historical sources: The Skate by Jean-Baptiste-Siméon Chardin (1699-1779) and William Holman Hunt’s (1827-1910)  The Scapegoat. The present painting It Says Here includes the figure of Simpson with slouch hat and badge riding a plodding horse that might variously be derived from Hieronymus Bosch’s (c1450-1516) Apocalypse or Rembrandt van Rijn’s (1606-1669) The Polish Rider, both of which could be said to directly challenge the classical equestrian format. We also have a contradiction - a lance which is screened off from the viewer by a cyclone wire fence - suggesting that Simpson’s pacifism is not the subject of the work. There is also a curious figure lower left with an opened book. A beetle, possibly a cockroach, which also recalls the use of trompe l’oeil insects in Flemish still life painting, rests on the figure’s head. The anti-war sentiment which underlies this series of paintings is made clearly evident in the illustration in the book the figure is holding - a nuclear mushroom cloud. The wire fence suggests Australia’s no-go zone at Maralinga, the site of nuclear testing in the 1950s.