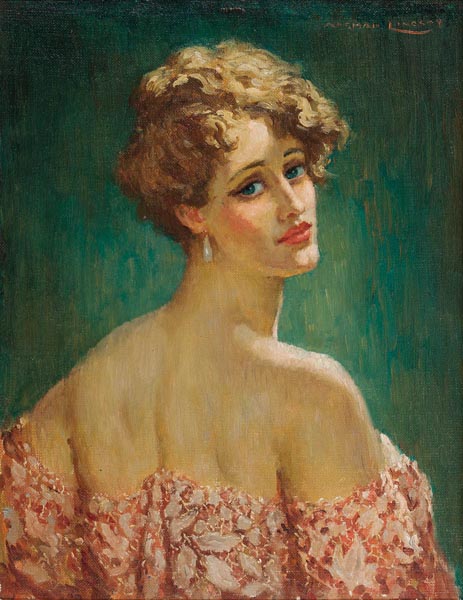 By
Lot:
Lady in Pink

I have taken the feminine image as a dominant factor in my concept of life, both because I love the beauty of women, and because they are the continuity principle which drives life eternally on into the future… I have utterly repudiated the academic nude image of femininity as an innocuous stuffed dummy designed to decorate the walls of second-class suburban homes, but I have sought to infuse into it as much vitality and desirability as my own response to women suggests, and which is the normal response of any properly constituted male ego.1

Norman Lindsay found infinite aesthetic possibilities in the female form, dedicating his working life to representing the sensuality and physical perfection of his subjects. A devotee of working directly from the model, Lindsay sketched and painted hundreds of beautiful women in a career spanning more than seventy years. Prior to the 1930s Lindsay’s output was comprised of etchings, watercolours and pen drawings but in early 1932 he rented a studio in Bond Street, Sydney moving to Bridge Street in 1934, and devoted himself to oil painting. Then in his fifties, Lindsay was revitalised by the possibilities engendered by this new medium, and by the mid-1930s was again a prodigious artist, overcoming a brief period of flagging momentum.

The studio at Bridge Street has taken on great importance in the context of Lindsay’s oeuvre. It was here that he painted some of his most important oils and unveiled his most iconic models, most famously Rita, an exotic woman of Chinese and Spanish descent who epitomised his ‘ideal’ of feminine beauty. Lindsay’s paintings from this period enact a departure from the allegorical themes of his earlier work to a representation of the model as a standalone entity, consumed with a post-impressionist zeal for colour and painterly effects.

While it is possible to identify many of Lindsay’s models owing to their repeated representation in his paintings, the model depicted in the enchanting portrait entitled Lady in Pink is unknown. Lindsay exploits the sensuality of this radiant blonde beauty, bejeweled and adorned in a lacy pink gown, the flesh of her back and shoulders exposed. She sits with her back to us, her long neck accentuated as she cranes her head around to fix her gaze in the direction of the viewer. The model’s piecing blue eyes and ruby lips are offset against the translucent tones of her exposed skin, directing the viewer’s eye to the work’s focal point, her face. Lindsay “believed that with facial characteristics the eyes were the intelligence, the nose the character and the mouth the emotions,”2 Here the model’s face is highly expressive, conveying a sense of introspection and sadness.

In an era when most Australian artists were embracing Modernism, “Lindsay strove instead for a kind of art in which the image itself would be privileged through visuality, and whose moral value resided in its power to arouse ‘a conviction of beauty".3 He succeeded admirably.