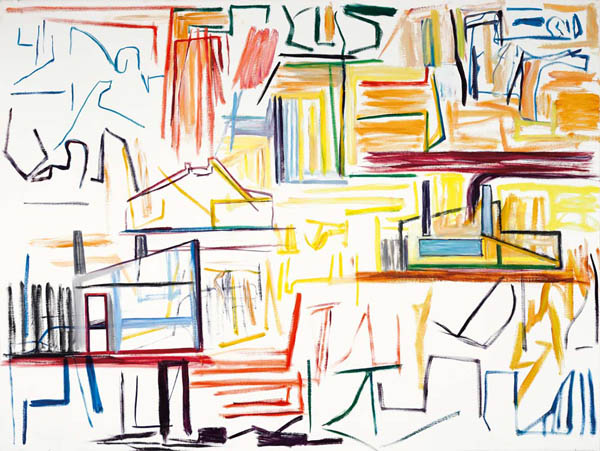 By Catherine Baxendale B Phil Hons in Blog
Lot:
For the Moment of Porto Alegre

The art dealer Ray Hughes once declared that ‘everyone wants to be Ken Whisson’s Captain Cook.’1 As the artist explains, ‘I’m discovered and forgotten and discovered and forgotten and it will go on for the rest of my life I imagine.  And so each time it will be a great joy to be discovered again and probably a great joy to be forgotten.’2 In recent years, however, a number of exhibitions have served to more firmly entrench Ken Whisson’s place within Australian visual culture. In 2012, Victoria’s Heide Museum and Sydney’s Museum of Contemporary Art staged a major, joint retrospective of the artist.3 The following year, Whisson’s work was selected for inclusion in the prestigious Australia exhibition at London’s Royal Academy.4

Born in Lilydale, north east of Melbourne, in 1927, Whisson’s formative years were spent under the tutelage of Danila Vassilieff (1897-1958), Melbourne’s pre-eminent figurative expressionist.5 Through Vassilieff, Whisson formed loose acquaintances with Sidney Nolan (1917-1992) and Albert Tucker (1914-1999) during the 1940s and early 1950s, when the bohemian Heide Circle was in its ascendancy.  The brooding, visceral quality of Whisson’s early works is attributable to all three artists, while Nolan’s emphasis upon spontaneity of execution – encapsulated by his motto, ‘let it fall’ – was to be an enduring influence on Whisson’s creative practice.6

Ken Whisson’s dual status as both insider and outsider of Australian art is reflected by his personal circumstances.  Since 1977, Whisson has lived in Perugia, Italy, while continuing to exhibit his works exclusively in Australia. Glenn Barkley and Lesley Harding note that Whisson’s decision to live in Perugia stemmed from ‘the need for some degree of distance from Australia and the New World, the modern industrialised world, together with a desire for the perspective that comes with “living outside”.’7 The artist’s arrival in Italy coincided with a fundamental shift in substance and approach. Having previously painted on board, Whisson began to favour canvas for greater ease of transportation to Australia.8 Whisson also exchanged the sombre, solid tones of earlier works for a brighter palette, most often consisting of primary colours on a white ground.  At the same time, the artist’s compositions grew increasingly sparse and linear, showing a preference for schematic description over more concrete representation.

For the Moment of Porto Alegre features all of Whisson’s most captivating visual traits. The horizon line has been jettisoned in favour of an unfixed and immersive perspectival approach.  Coloured lines skirt across the picture plane, overriding all sense of order or equilibrium. Factories and suburban houses appear as ghostly outlines, bereft of real substance.  The overall impression is of a landscape half-remembered – made foreign, in Whisson’s case, by physical and temporal distance.

Ken Whisson is often described as a ‘cerebral’ artist, in the sense that his paintings rarely correspond to an external reality. They are less representations of ‘things’ than expressions of the artist’s mind at play.  Whisson’s working methods may be derived in part from the ‘automatic drawing’ championed by the Surrealists of the early twentieth century: as the artist revealed in relation to Jean’s Farm of 1972-5, ‘I sat down to paint this picture in my usual way of having as little in my mind as possible … so that my mind can expand on the canvas.’9 James Mollison has observed that Whisson tends to work across the canvas from left to right, in a process akin to handwriting.10

Ken Whisson’s deeply idiosyncratic paintings arise in response to an imperfect world. His works convey a tacit acceptance of life’s sheer messiness, making a virtue of all that is ambiguous, unfixed, or indefinite.11 Paradoxically, this may explain why Whisson’s art continues to resonate so profoundly.