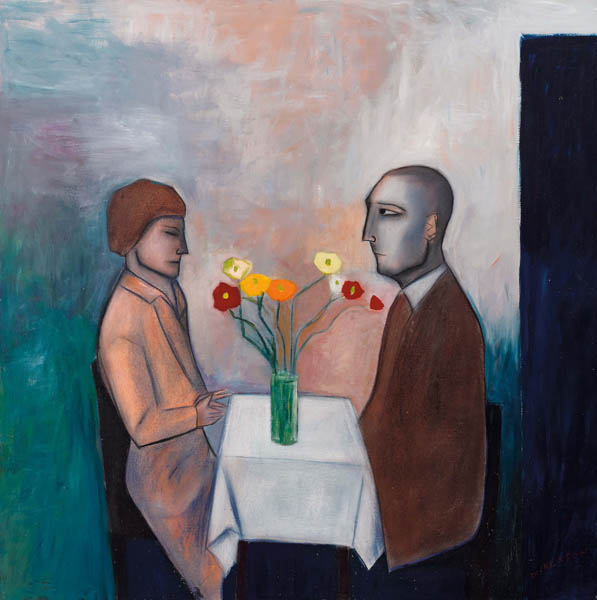 Robert Dickerson was an independent, self-taught artist and his idiosyncratic art is mostly drawn from autobiographical moments and memories. His images of displaced people, clowns, geishas, children and sportsmen ‘strike a chord in the Australian psyche’.1 His art is characterised by a certain melancholy which finds similarities in the art of Marc Chagall (1887-1985) and Georges Rouault (1871-1958). Dickerson was the only Sydney-based artist to participate in Bernard Smith’s Antipodeans exhibition held in Melbourne in August 1959, along with other highly regarded figurative artists including Arthur Boyd (1920-1999), Charles Blackman (1928-1928), Clifton Pugh (1924-1990) and John Perceval (1923-2000), among others, who through their art, were protesting the rising popularity of abstraction.

Throughout Dickerson’s oeuvre, he would return to a core of dominant themes; children, groups and interior scenes – the figures in these works were often characterised by loneliness or a sense of isolation. Here, in what should be a joyous occasion, the mood is clearly in contrast to the title. A wedding anniversary should invoke a cause for celebration, a time for a husband and wife to reflect upon their happy union. Dickerson has, in the present work, depicted a couple at odds with one another. The artist employs tools such as colour and figuration to set the tone; here, a cool palette of blue and grey is the backdrop for the scene, setting a sombre mood. The figures are contained within their own spaces, creating a sense of isolation rather than togetherness. Dickerson’s distinctive blank, angular facial features leave no clue as to their circumstances. The brightly coloured poppies act as a clever visual divide between the couple, emphasising the vacant space between the two.

Here, the couple in Dickerson’s composition pique the curiosity of the viewer – what is their story, how did they come to be here? The artist’s skill as a figurative painter is clearly demonstrated by his ability to set a scene within his works, whether it be a meeting on the street, a child playing with a cat or a husband and wife sharing an anniversary dinner. Dickerson provides partial narratives within the compositions he creates however his scenarios are left unresolved, it is for the viewer to conclude the story.

With an artistic career dating back to the 1950s, Dickerson made an extraordinarily significant contribution to Australian art history. His long and productive career came to an end in 2015 - Dickerson passed away at the age of ninety-one at his home in Nowra where he combined his passion for horses with painting. His wife, Jennifer Dickerson, reflecting on his path in life and art, observed ‘He has been swimming against the tide all of his life. It keeps him strong. The occasions when he has been going with the flow brought him intense discomfort; he felt he was weakening himself, and his art, and he knew adversity was a true friend.’2