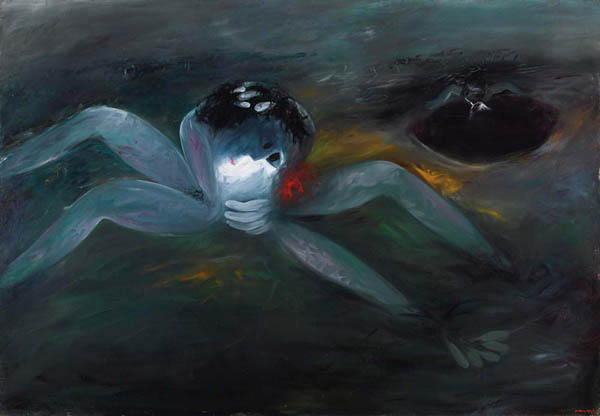 By Gavin Fry in Blog
Lot:
The Lovers

In 1958 Arthur Boyd was given significant recognition with an invitation to exhibit at the Venice Biennale. In a somewhat unexpected pairing, he was to be shown alongside Sir Arthur Streeton (1867-1943), Australia’s most significant painter of the previous generation who had died fifteen years earlier. The exhibition was designed to show the ongoing tradition of landscape in Australian painting and the responses of a new generation to their previous masters. Boyd’s Wimmera and Bendigo landscapes worked well with Streeton classics such as Fires On! and Golden Summers, and it was a formal acknowledgement of the place he had reached in Australian art, a couple of years shy of his fortieth birthday. It appears that his placement in such a traditional and conservative context helped fire a profound change in Boyd’s artistic direction. The sweetness and light of the Venice exhibition was placed firmly behind him as he vigorously pursued the new direction of Love, Marriage and the Death of a Half-caste; better known the Bride series, first shown at Australian Galleries that same year.

The Bride paintings, with their dark and troubled couplings of man, woman and mythical beast, were expressive and modern, yet firmly rooted in mythology and ancient stories. Like his friend Sidney Nolan (1917-1992), Boyd took ancient myths and reimagined them in an Australian context. The ill-starred marriage of the black man and the white woman was still a raw concept in 1950s Australia and Boyd, with his deeply spiritual upbringing, reached deep into his imagination, carried forward on his understanding of the art of the past. The specifics of the bride story were then generalised into a series of meditations on the nature of love, both spiritual and physical. Nolan had mined such stories as Leda and the Swan and Boyd too worked through the catalogue of classical mythology. But whereas Nolan had tended toward a relatively straightforward narrative, Boyd invented a series of symbolic figures to carry the spirit of the story.

Arthur Boyd’s Lovers presents a tender coming together of two figures, the dark male and the white woman. The lovers have melded into one being, heads gently cradled and lit from the inner glow of the radiant woman. It is redolent of the Tibetan Buddhist Yam-Yum, the tantric melding of two individuals into one. But the splayed legs and amorphous body also form a menacing beast, a four-legged spider or some strange crab. In the coupling of the two ardent lovers a new being has been created, one that might as easily bring disaster as pleasure to the relationship. In the background shadows, a third figure leans forward into a dark pool. It is a reappearance of the Nude Figure Washing, one of the cast of characters from the Bride series. Again the awkward splayed legs create a menacing presence, perhaps the ritual washing before the slaughter or the female spider preparing to devour her partner once his task is complete.

The scale of the work is significant in that the man-woman-chimera is roughly life-sized, bringing a believable reality to the striking invention. Pale grey limbs and facial features loom out of the darkened scene, the only colour being flickers of light from the red hair of the woman, reflected out from the glowing underside of the melded head. But words become superfluous in grappling with the meaning of Boyd’s invention, for it is the visceral reality of the artist’s vision that provides all the explanation required. The Brides and Lovers are among the most powerful works created by any Australian artist in the middle years of the twentieth century, high points in the career of the most loved and admired artist of his generation.