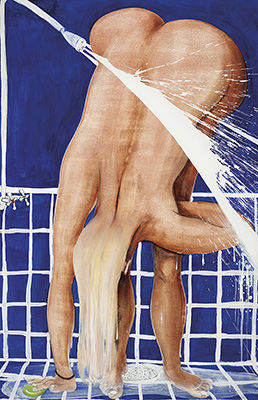 Brett Whiteley was one of Sydney’s most accomplished sons. Whiteley was born in 1939 and his artistic trajectory was astonishing. Whiteley won his first art prize at the age of seven at the 1946 RSPCA competition in Sydney and ten years later he won the Young Painters’ Section Prize at the 1956 Bathurst Show. At the age of twenty, he won the Italian Government Travelling Art Scholarship, which was judged by the famous Australian artist Sir Russell Drysdale (1912-1981) at the Art Gallery of New South Wales. This scholarship enabled him to travel to Naples, Florence, Paris, London, Siena, Arezzo, Venice and Rome, where he set up a studio near the Spanish Steps. After being awarded a grant under the Dyason Bequest from the Art Gallery of New South Wales, he later set up a studio in London where he met the English artists William Scott (1913-1989) and Roger Hilton (1911-1975) and visited Arthur Boyd (1920-1999) and John Passmore (1904-1984).

After this early success and furious activity, Whiteley’s life became firmly set on an artistic path and he has more than proven himself through forty-nine very successful solo exhibitions between 1962 and 1992 – a highly productive average of three exhibitions every two years. Whiteley held his first solo exhibition at the age of twenty-three at the Matthiesen Gallery in London in 1962. In this context, it is worth noting that Whiteley is the youngest non–British artist to have a work purchased by London’s prestigious Tate Gallery. His painting, Untitled Red Painting of 1960, was purchased from Bryan Robertson’s famous Whitechapel Gallery in London during the groundbreaking group exhibition Recent Australian Painting of June to July of 1961 – Whiteley was just twenty-one years old when he created the painting and his precocious talent was well noted. Brett Whiteley arrived in London in 1960 - the start of the time of the so-called Swinging Sixties. It was a time when London was the centre of the new social ferment engendered by the baby boomers who were then aged between eighteen and thirty years. It also was a time when Australian art was readily accepted in England. London and English society were already accustomed to Australian talent - Patrick White was respected as an author from his stay there in the 1930s and the Australian artist Roy de Maistre had worked there from the 1920s. This was added to by an influx of artists such as Sidney Nolan, Arthur Boyd, Francis Lymburner, Louis James, Tony Underhill, Frank Hodgkinson, John Olsen, Leonard Hessing, Albert Tucker, Leonard French and John Passmore.

In July 1969, at the end of a two-year stay in New York on a Harkness Fellowship, Whiteley flew from New York to stay at Navutuleva Village, about two hours drive from Suva the capital of Fiji. Whiteley’s wife Wendy and the couple’s five-year old daughter Arkie, joined him about two months later. They lived simply and happily and enjoyed their island paradise after the turmoil and bustle of New York. A little over five months later, their blissful stay was abruptly cut short by an early morning drug search undertaken by the Fiji Police. The Whiteleys were arrested, fined £F50, and ordered out of their island paradise to face schadenfreude tainted front-page infamy upon their ignominious return to Sydney in November 1969. The subsequent tut-tutting almost convulsed the harbour city.

Sequestered in Sydney, Whiteley seemed to find some form of compensation and relief at his Lavender Bay home and his paintings there are characterised by observational acuity and a contented visual pleasure – these paintings, without exception, are untroubled feasts for the eye. They all possess a seductive domestic calmness and recall the charming indoor paintings of the Intimist school in Paris by French artists such as Edouard Vuillard (1868-1940) and Pierre Bonnard (1867-1947), both of whom believed that grand subject matter was overestimated. For them, painting had to speak of paint and perception – the perception, that is, of simple daily events and observations through a refined sensibility. What was called for was a sophisticated awareness of the everyday world, in ways that could awaken creative response and reflective thought.

Brett Whiteley’s painting Arkie under the Shower of 1986 to 1987 is characteristic of this voluptuary period in his life. The work is related to his important painting Screen as the Bathroom Window of 1976 in its use of a common domestic theme and its predominant use of the colour blue. It is a colour that Whiteley used for its association with ease and calm. All of Whiteley’s paintings that show a preponderance of blue, especially ultramarine, are associated with rest, reflection and domestic bliss – they often depict scenes that are as natural as a birdcall or a cat licking its paws. For example, his painting Screen as the Bathroom Window of 1976 shows a nude female, most likely his wife Wendy, drying herself after a bath set in an ambiguous pictorial space. The viewer is presented with a rear view of the nude as it bends over with its left foot on the edge of a bathtub. The unemptied bathtub rises along the right of the canvas and is balanced by an ivory coloured wall on the left of the picture plane upon which hangs a calligraphic drawing of a vase and flowers, which is lit by two spotlights. The red tones that come through the window indicate a setting sun that sends its glow into the room through an open window where its colours blend with and accentuate the interior ambience. The blue colours that pervade this painting do not relate to any naturalistic intention upon Whiteley’s part and they spill throughout the room like the scent of a perfume might – they flood the room with the sybaritic calmness found in so many of the paintings of the great French artist Henri Matisse (1869-1954).

Whiteley was much taken by the theme of women, basins and bathrooms – by what might be called an ablution aesthetic. There was something sensuous, rather than sensual or erotic, in such scenes that allowed him to use his expressive and lyrical line to trace the outlines of the female form as though it co-existed with the room. These singular attributes arise early in Whiteley’s artistic life and may be seen in a 1963 charcoal drawing entitled Woman Shampooing Hair and by the time of his The Bathroom series of 1964, shown at the Marlborough New London Gallery, the theme was one that he was commonly identified with. He returned to this ablutionary theme especially at times when he felt domestic and personal contentment. When one views Whiteley’s painting The Bather of 1981 one can see how he long he has kept the theme and how he has almost over accentuated the lyricism of the female form. The nude sits in a bath of greenish water hunched over with its right hand washing its barely visible hair. The top left-hand corner shows ultramarine blue tiles and a running water tap. The painting is awash with fleshy and highly elongated legs and limbs that give the female figure an insect-like appearance. There is little doubt that this particular feature of the painting was extracted from the work of the famous Spanish/French artist Pablo Picasso (1881-1973). Picasso’s Female Bather and Nude series of the late-Twenties to the early-Thirties show harshly de-romanticised female nudes with exaggerated features in strangely contorted poses. Most often, these nudes are similar to preying mantis forms conceived in response to the Surrealists’ view that women are just as predatory and like the mantis end up destroying the male. This view is also responsible for the unpleasant aspect of some paintings of the female form by Salvador Dalí (1904-1989), but his negativity is nowhere present in Whiteley. For instance, Whiteley’s painting The Bather of 1981 holds no threat and if anything is languorous rather than menacing and its flushed body is caused by the hot water of the bath rather than any blood-spilling act of aggression. Whiteley’s nudes, whether drawn or painted, are always relaxed, unthreatening and languid; their bodies are not invested with malice. They are always shown doing normal things like reading, combing hair, washing, bathing, sleeping, lying on sofas and the like. This is undoubtedly part of the extended charm and visual sophistication of Whiteley’s painting Arkie Under the Shower of 1986 to 1987.

Arkie was the Whiteleys’ only daughter and she was born on Friday 6 November 1964 in St. George’s Hospital in London and died at the age of thirty-seven of adrenal gland cancer at Sydney’s Palm Beach on Wednesday 19 December 2001. She made quite an impact in films and appeared in A Town like Alice, Razorback, Mad Max 2, Gallowglass and The Last Musketeer as well as acting in the television series Prisoner and A Country Practice. The painting shows the then twenty-four year old Arkie naked and bending forward while showering in an ultramarine tiled enclosure. Her long blonde hair streams downward as though it had been just rinsed and the shower conduit with two water taps rises on the left and curves downward to a shower head that spurts water, here indicated by white paint, on the figure’s body and back. The predominant colours are white, a deep blue and the fleshy tones of the body and essentially these mimic the colours found in the best of Whiteley’s Lavender Bay series of paintings during the Seventies and Eighties, where repose and calm dominate. Whiteley is well known for his use of this particular blue colour and has remarked that ‘Windsor and Newton Deep Ultramarine oil colour has an obsessive ecstasy-like effect on my nervous system quite unlike any other colour’.1 The depiction of the shower spray of water, applied by squirting a paint filled sauce bottle, adds a dramatic and textural element to what is otherwise a relatively smooth canvas – a technique also used by the English artist David Hockney (1937-). What we see in this exceptional painting is an intimate scene as though glimpsed while passing an open door and, since it was a gift to his daughter and never meant for others, it provides a personal and spontaneously painted window into his own domesticity and private life.

Brett Whiteley’s painting Arkie Under the Shower of 1986-87, completed five years before his untimely death, is a rare work and the only known oil painting by the artist using his daughter as a subject. The painting has never been exhibited. It is a swiftly conceived vignette executed with the bravura and dash that made the brilliant Whiteley so justly famous.

Pearce, B., Brett Whiteley: Art and Life, Thames and Hudson and the Art Gallery
of New South Wales, Sydney, 1995