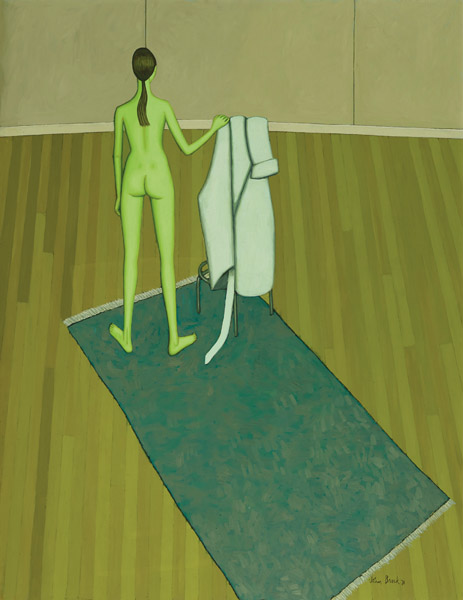 Some artists paint what they see; others what they feel. For the Melbourne-based artist John Brack it was different. For Brack, art was more in the manner of an intellectual act.

Perhaps, this was why he was so keenly admired for the quality of his art and so respected for the deep understanding of his teaching (at Melbourne Grammar School from 1952 to 1962 and the Victorian College of the Arts from 1962 to 1968). Today, Rick Amor (born 1948, winner of the McClelland Award in 2007) and Jon Cattapan (born 1956, Professor of Painting at the VCA and Winner of the Bulgari Award in 2013) still praise his intelligence and visual acuity. For Brack it was always about the “voice” of the art – about aesthetic timbre.

Brack made his solid artistic reputation in 1956 when the National Gallery of Victoria purchased his iconic and highly popular painting Collins Street, 5pm. It cemented him into Australia’s cultural firmament. So much so that, subsequently, collectors eagerly sought out his paintings especially after his outstanding opening night sell-out at Sydney’s Rudy Komon Art Gallery in August 1980. Consider the following subsequent outcomes: Brack’s painting of 1954 entitled The Bar was keenly contested and brought an auction record of $3,120,000 (including buyer’s premium) in April 2006 and soon after, in May 2007, his The Old Time of 1969 was sold for $3,360,000 (including buyer’s premium) – these stellar records stood as the highest auction prices for any Australian painting until the Menzies sale of Sidney Nolan’s First-Class Marksman in 2010 for $5.4 million (including buyer’s premium).

Significantly, after 1956, Brack gave up on all his landscape-themed painting and turned his artistic attention to portraits, nudes, city scenes, the turf, interiors, the gymnasium and the dance hall – all of which existed in suburban worlds that were nearby and that could be observed with some detachment.

This turn of artistic direction decision was deliberate and decisive. It enabled him to more markedly use his visual irony and social commentary skills in ways that peeled back layers of superficial veneers and social vanities. These new themes were always approached and depicted sympathetically, as there are no social, political aspects in his work. He was much more interested in the compositional opportunities that these subjects offered.

To this end, Brack avoided any emotional underpinnings, any expressive brushwork and any overt iconographic “meaning”. Generally, any meaning contained within his paintings after 1956 is restricted to the actual “object-painting” itself. The meaning inheres in the painting – everything refers to itself - it does not rely upon external content, reference or metaphor, nor is it taken from literature, history, anecdote, autobiographical incident or subjective experience – for Brack it was always about pictorial content rather than personal meaning. Put simply, they were thought into existence rather than felt into being.

That is, Brack turned to the use of carefully constructed geometric compositional formats – these introduced formal harmonies that rested upon carefully configured and balanced arrangements of pictorial elements. Most of these works, such as the present striking painting Green Nude of 1971, also used a deliberately restricted palette of muted non-distracting colours – often toned-down greens, pinks, ochres or mauves. Thereafter, his paintings became less about social commentary or wry observations (as in Collins Street, 5 pm. of 1956) and more in the manner of pictorial explorations of shapes, harmony of forms, relationship of human and non-human juxtapositions and the development of systematized compositions. These pictorial refinements may also be seen in the works The Boucher Nude of 1957 and Nude with Persian Carpet of 1972.

To this end Brack avoided any painterly flourish, any emotional underpinnings, any expressive brushwork or overt iconographic “meaning”. Generally, any meaning contained within Brack’s paintings after 1956 is restricted to the actual “object-painting” itself. The meaning inheres in the painting – everything refers to itself - it does not rely upon external content, reference or metaphor, nor is it taken from literature, anecdote, autobiographical incident or subjective experience – his paintings are not “stories” about something. The paintings’ sense of visual presence emanates from a conscious detachment from the artist’s emotional makeup and owes their creation to the application of intellectual and analytic skills.

One can clearly see all these underlying elements and identifying factors in the present work Brack’s Green Nude of 1971. The strikingly restrained painting shows the back of a standing naked model with her right hand resting on a coat stand with her robe draped over it. The figure stands on a large green carpet and she faces an expanse of studio wall. The studio floor is made up of wooden boards whose repetitions are relieved by striated darker planks in the top left register that visually balance out the larger expanse of floorboards to the right of the canvas.

The most striking feature of this early Seventies painting is the unrealistically high viewpoint that Brack has adopted – its ladder height perspective emphasises the flat perpendicular qualities of the composition. The painting’s imagery hangs almost curtain-like in front of the viewer with no distraction of receding perspective or a window’s external view; likewise, there is no furniture or flower arrangement - it is as though Brack, in this accomplished domestic sized painting, places singular stress and sole attention upon his arrangements of geometricized form.

Dr. Sasha Grishin, Professor of Art History at the ANU, the author of the best scholarly study of Brack’s works, recognises the importance of his early Seventies period and the ways that it advanced upon his earlier forays into these geometrical compositions:

In the winter of 1970 Brack made eight conté drawings of the nude from the model and the following summer, working from these drawings, executed a series of eight oil paintings. It was his normal working procedure to use the model for the drawings and then, without the model, take the drawings as his point of departure for the paintings.

… The new series of nudes, when compared with the two series that preceded it, has a startling complexity, sophistication and subtlety. The conceptual elements remain relatively constant. The nude, who in her pose frequently echoes an artistic convention, generally refers to the past and to tradition; the bare studio with its naked walls and plain receding floorboards, refers to reality and the present situation; while the oriental carpet – the carpet paradigm - as if separating two worlds nevertheless forms a strange physical bridge between them.

… The notion that the nude is vulnerable and that the old classical stability is now permanently lost to a new reality characterized by uncertainty is a feature common to a number of paintings in the series, including The pink carpet, The red carpet and Mauve nude, all of 1970 and The fur coat and Green nude of 1971.

… With the nude, Brack seems frequently to retrace his steps, to return to earlier forms and attempt a different formal resolution to the problem. Despite this zig-zag path of development in his paintings of the nude, there is an unfolding progression in his work of the early seventies, a predetermined logic.

… The widening gap between Brack’s art and its perception by the Australian art public is apparent in the press reviews that accompanied the exhibition of this series of nudes, at the Rudy Komon Gallery in Sydney in March 1971 and at the Joseph Brown Gallery in Melbourne in September that same year. Newspaper criticism rarely went beyond a response to the subject matter. Elwyn Lynn noted that Brack ‘wants the nude to look like a de-sexed isolated object, as the central piece in a rigorous structure almost as unappealing as his earlier cabinets of surgical instruments … the critic’s cursory responses to the model were largely irrelevant. The exhibition sold well, four of the eight paintings and two of the twenty drawings being acquired by State and regional galleries.

Brack held thirty-three solo exhibitions between 1953 and 1999, the year of his death – a remarkable tally of one solo show every fifteen months. Additionally, his paintings were the subject of six major retrospective exhibitions between 1977 and 1999. His work has also prompted the publication of four scholarly monographs since 1971, the most authoritative of which is written by Emeritus Professor Sasha Grishin of the Australian National University in Canberra. Needless to say, Brack’s paintings hang in all of Australia’s State galleries and the National Gallery of Australia.

It was one of the lessons of Cubism: art did not have to be expressive in order to be aesthetic in its effects. John Brack was the pre-eminent Australian artist to take this lesson to heart; the optical equilibrium – the aesthetic stasis – of his Green Nude of 1971 is a testament to the artistic refinment of this lesson.