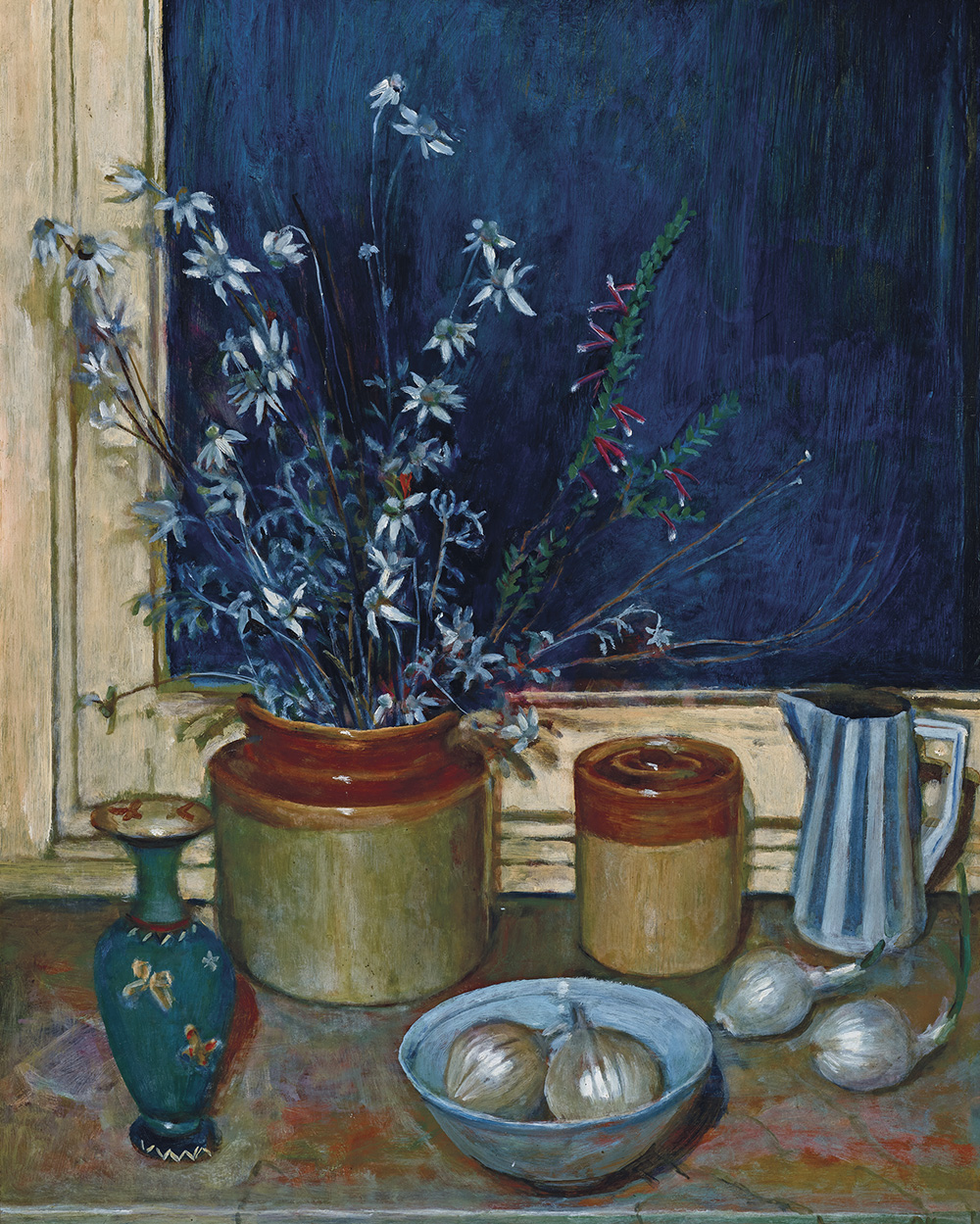 In November 1970, Margaret Olley suffered the loss of her friend and fellow artist, David Strachan (1919-1970), when he was killed in a car accident at the age of 51. Having met during the 1940s as students of Jean Bellette (1908-1991), Olley and Strachan forged a lifelong friendship.1 The two artists travelled and painted together over twenty-five years, eventually living in the same Sydney suburb of Paddington.  Despite certain differences in temperament and style, Olley and Strachan shared a rare artistic affinity:

[Olley] and Strachan were as sister and brother to the subject of still-life, although their differences were as Walter Sickert described between the Nash brothers: one with his head in the clouds “as a poet should be”, the other as a child with his feet on the earth as “the painter should be”.  Strachan was the one with his head in the clouds, nudging his vision into the penumbra of the self-conscious … Olley’s paintings by contrast are celebrations of materiality.2

Olley approached Strachan’s family to ask if she might continue to paint in his vacant house at 163 Paddington Street.  Olley had often worked there alongside Strachan and wrote to his sister that she had ‘always loved painting there … just something about the place.’3 Strachan’s furnishings had been left intact, such that the house became an enduring portrait in absentia of its departed owner.

The eclectic interiors of 163 Paddington Street would provide the inspiration for Olley’s finest works of still-life from the 1970s.  Her paintings of this era are distinguished by a captivating sense of stillness and restraint, as seen in the present work, Flannel Flowers 1975.  From the comfort of Strachan’s kitchen, the artist presents a careful arrangement of objects both natural and man-made.  Olley’s robust handling of the paint allows her to capture varying surfaces with remarkable naturalism.  The pearlescent sheen of the onions is deftly contrasted with the dull, veiny patina of a marble benchtop; while the dry, delicate fronds of wildflowers are set against the smooth, glossy hardness of glazed earthenware.  The composition is unified through Olley’s restricted palette of blue, ochre, and yellow.

The nocturnal setting of Flannel Flowers and many other works of this period – including White Still Life 1977 – is testament to the influence of Strachan upon Olley’s creative practice.  Inspired by the theories of Swiss psychoanalyst Carl Jung, Strachan believed in the creative power of nighttime: ‘the most pregnant time to paint.’4 Though Olley did not share Strachan’s fascination for dreamlike, ethereal imagery, her nocturnal still-lifes from the 1970s often bear a meditative quality.  Objects of domestic life are continually revisited in harmonious arrangements of colour and form. Olley’s images make no reference to the world outside her domestic realm: darkened windows instead provide an inky backdrop for the objects within.

Although Olley insisted that her interest in depicting Strachan’s former home stemmed more from practicality than sentiment – ‘David’s house was convenient’ – it is easy to see why these paintings are often regarded as acts of memorialization.5 In this sense, they may be seen to foreshadow the more literal preservation of Olley’s own Paddington home some forty years later, at the Tweed Regional Gallery in Murwillumbah, New South Wales.6