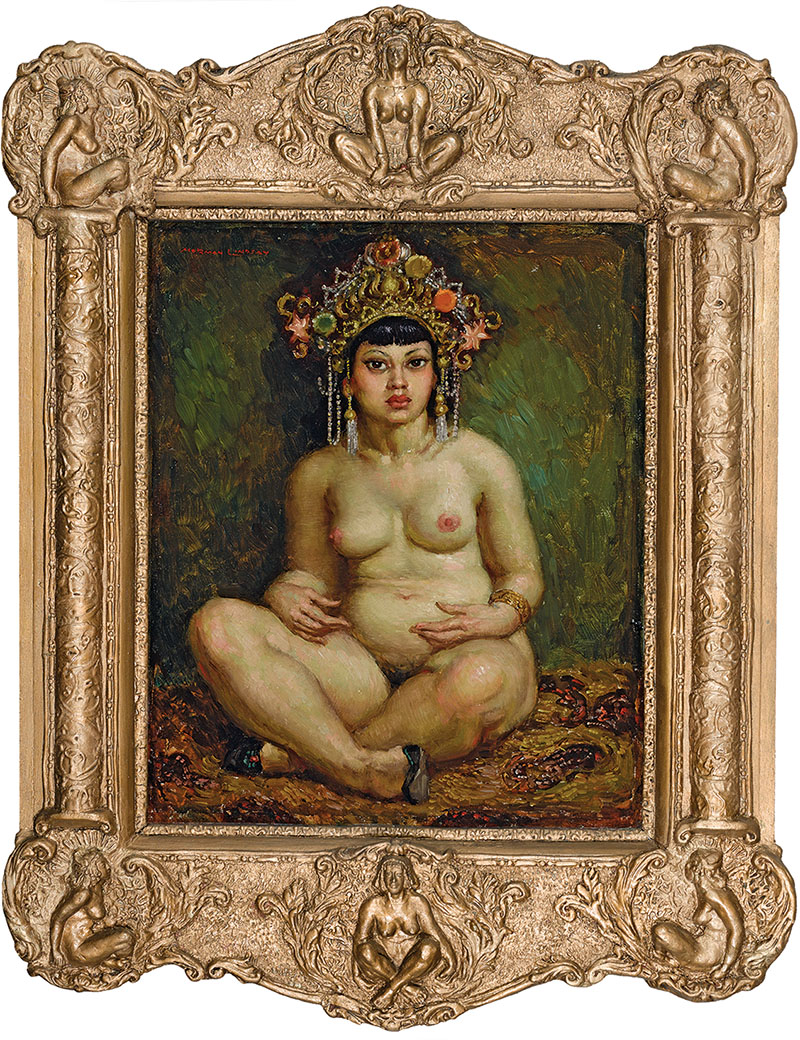 By Catherine Baxendale B Phil Hons in Blog

Shown wearing little more than a headdress and silk slippers, Iris is a striking embodiment of sensuality and mystique. As with many of Norman Lindsay’s nudes, the sitter’s lack of attire does not imply her vulnerability - rather, Iris appears emboldened by the viewer’s gaze, assuming an air of magisterial detachment as she poses on a swirling carpet of burgundy and gold. Iris’s exoticism is further suggested by her cross-legged posture and the open placement of her hands, which plainly evoke the lotus position held during Buddhist and Hindu meditation.

Very little is known about the sitter’s true identity; Lin Bloomfield notes only that Iris ‘was a Chinese showgirl who posed for Norman in the 1930s.’1 Iris’s ‘exotic’ appearance would surely have been a source of intrigue during the era of White Australia, despite the relative cosmopolitanism of the Kings Cross demi-monde.  For Lindsay, it is likely Iris’s unusual appearance was a large part of her appeal: the artist’s practice throughout the 1930s and 1940s was characterised by his prolific use of live models, this encompassing ‘all types […] and all of them girls of the people.’2 Alongside a small number of pencil studies and portraits in oil, Iris also featured in two of Lindsay’s major history paintings, Don Juan (1935) and East Meets West (1950).3  Lindsay is estimated to have employed 130 different models during this period, using a notebook to record their names, addresses and salient physical attributes.4 One can only imagine what some of these might have been.

Lindsay showed little interest in the society portrait, preferring instead to draw his models from ‘the shopgirl, the servant-girl class.’5 As the artist explained, ‘I would have no use for a highly intellectual, cultured lady as a model. It would put me out, having to pay the polite deference her class and culture would expect.’6 Perhaps as a consequence, Lindsay’s portraits are often more revealing of the artist than their subjects. Rather than aiming to slavishly replicate their features on canvas, Lindsay would approach his model as ‘a live dummy from which to extract forms and colour’; ‘a unit in a composition.’7 The final work would represent an outlandish projection of the artist’s own fantasies, drawn from classical mythology, history and literature. Only in the hands of Norman Lindsay could a ‘casual hoyden’ plucked from the grimy streets of inner Sydney be transformed into ‘an Olympian goddess’.8

Iris is lavishly presented in its original custom-made frame, hand-crafted by the artist’s wife, Rose Lindsay, according to a secret recipe.  Inspired by Venetian frames of the eighteenth century, Rose’s opulent design pays clear homage to her husband’s composition, featuring a cross-legged nude as its primary motif. As such, Iris may be considered a genuinely collaborative work, particularly in light of postmodern reassessment of the frame as a continuation of the work of art.

Norman and Rose enjoyed a fruitful - if at times, fraught - partnership spanning six decades.  Alongside her talents as a framer, Rose performed a multitude of creative roles: she was Norman’s model, confidante, master printmaker and business manager.9 In 1959, as he approached his final decade, Norman paid a heartfelt tribute to Rose in a letter to his biographer, John Hetherington:

Since the feminine image is the central motif of my work, Rose compacted for me an experience of all its most vital contents, mentally, emotionally, and physically […] Another important facet of our union is that from some inherited source she was gifted with an amazingly sure sense for values in plastic art […] such an understanding cannot be intellectually acquired - it must be an intrinsic faculty of mind. It has been an immense value to me in the technical problem of work.  Her critical acumen in that respect has often staggered me.10