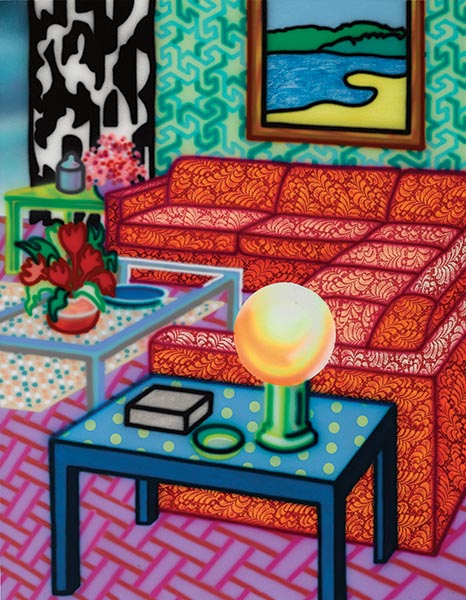 By Peter James Smith in Blog

Howard Arkley is a contemporary artist whose work has joined that elusive million-dollar club. A new record was set at Menzies winter sale on June 27 in Melbourne, as Deluxe Setting, 1992 (below) achieved just over $1,500,000, eclipsing his previous record of $646,000 set in 2016 for a work of the same medium and stature. Record auction prices were also achieved for works by Bronwyn Oliver, Rick Amor and Inge King.

At the outset of the bidding auctioneer Martin Farrah confided that Arkley was ‘one of the best’ artists going around. He was confident. The room was confident. Deluxe Setting, (Lot 32 ) in the flesh, simply radiated. The saturated colour over airbrushed tints seemed to pulsate, almost humming with electric vibrancy. For those on catch-up with Arkley’s oeuvre: he died tragically early in 1999 after representing Australia at the Venice Biennale that same year with wall-to-wall paintings of suburban interiors and exteriors, having exaggerated decorative patterning and fluorescent colours, all ironically gathered under the exhibition title The Home Show. His colourations critiqued suburban architecture and domestic design.

The flurry of such a record also helped along a second Howard Arkley work in synthetic polymer paint on paper, Zappo (Cityscape Mural), 1984 (Lot 66 ) which exceeded the estimated range of $24,000 to $30,000—based on previous realisations for early examples of his decorative iconography that became so important in his later work—to settle at more than $61,000 after spirited bidding between four telephones. That’s double.

Near the outset of the auction the audience was offered an intimate glimpse into the collecting world of Rodney Menzies, with the presentation of selected sculptures from his private collection. Lots 36 to 45 offered a glimpse of monumental bronze works, some of architectural scale, some calling for a garden environment, and some simply table sculpture. While such a collection of bronzes may be common in the United Kingdom, in Australia Menzies’ collection represents a substantial and memorable grouping. And it did well.

Particularly noteworthy was Tim Storrier’s life-sized bronze The Grand Impedimenta, 2015 (lot36), which reached just over $171,000 midway in its estimated range $160,000 to $200,000. This image and sculptural presence of a faceless man apparently had its origins as a garden scarecrow outside the artist’s studio; then in 2012 a painted version of this wayfarer, again with no face, won the Archibald Prize somewhat ironically for representing actual portraiture. And so his ‘journey of the self’ continued along the garden path to the current bronze, unassuming in stature but powerful in intent.

Other magnificent garden pieces included Rings of the Sun III, 2004 (Lot 37 ), a confident, mature and effortlessly simple stainless-steel modernist piece by Inge King—it reached a comfortable mid-range at $184,000. This was an equal record for the artist based on hammer price, and 50% more than the same sculpture realised in 2017. King certainly is in the pantheon of major modernist Australian sculptors and is an artist well-loved by the public.

More records were to follow: Bronwyn Oliver’s serene Shell, 2003 (Lot 38 ) next fell under the hammer for more than $440,000, eclipsing the artists previous record of $402,000 and also overshadowing the $266,000 paid for this work at auction in 2012, which admittedly was seven years ago, so some appreciation is to be expected. It is only a matter of time before Oliver’s biomorphic forms reach Arkley’s million-dollar club.

Even such painting notables as Rick Amor are au fait with the bronze-casting foundry. His Figure in a Landscape, 2007 (Lot 39 ), consisting of a metre-high bronze figure overshadowed and standing near three bronze tree forms on separate plinths, reached a record $294,000 for an Amor sculpture, this being $60,000 more than when it was last sold in 2016. This is a work that the buyer could have fun actually curating, by toying with the relative arrangements of the four pieces.

The final work in Menzies’ private grouping was Auguste Rodin’s La Femme Accroupie, Grand   Modele avec une Terrasse Plus Haute, (Lot 43 ) conceived in 1881-2 and cast in 2010. Rodin’s resting figure, crouching like a coiled spring, seems to be waiting for a Parisienne to burst from it. The realised price of $675,000 was some $60,000 below its previous visit to the saleroom in 2018.

The watery billabong paintings of Lin Onus continue to draw in traditional audiences as he captures the spiritual tradition of the Barmah Forest Country of Northern Victoria in a way that straddles both Aboriginal and Western Cultures. The reflective pools of Fish and Ripple – Dingo Springs I and II, 1995 (Lot 28 ) and (Lot 29 ) both sold comfortably at just over $208,000. Although well above reserve, and above the estimates offered by the auction house, we could perhaps have expected more for images of this stature from the final period of the artist’s output. There are too few to go around.

If we look to future stars of the secondary market, the extremely competent and culturally aware canvasses of Zhong Chen and Dean Home each performed brilliantly. Dean Home’s worms-eye perspective still life oil on canvas Our Swimming Spot; The Biggest Splash of the Day, 2012 (Lot 11 ) moved above its top estimate of $12,000 to secure a record price for the artist of near $16,000. Zhong Chen’s Guangzhou Series 7, 2007 (Lot 82 ) with its pixelated chinoiserie portraiture seems perfect for the millennial net-based generation selling for $20,800, more than double its estimated range.

Although the sale successfully achieved an admirable 87% by lot by my count, there were still some works of substance that were passed in. The cinemascope/microscope four metre canvas by Tim Maguire, Untitled 20050901, 2005 (Lot 48 ) depicting droplets on flower stems rather than flowers, failed to find a buyer to climb over the $100,000 lower estimate. Similarly, the modest Rosalie Gascoigne Amber, 1992 (Lot 49 ) with sawn fragments of weather-beaten plywood and reflective road sign that seemed too weary to generate her usual evocative power, failed to attract a bid near the low estimate of $90,000. The market seems to respond better to those artworks in an artist’s output with which it is familiar—should we call it the buyer’s comfort rug—be it Maguire’s flowers or Gascoigne’s clean clipped yellow roaderie.

Quoted realisations include buyer’s premium but exclude the GST on that premium.

About The Author: Peter James Smith is an established professional artist and writer based in Melbourne. Until his retirement from academia, he was Professor of Mathematics and Art and Head, School of Creative Media at RMIT University. He holds a Doctorate in Mathematical Modelling and three Masters Degrees in Mathematics, Statistics and Fine Art.